It may have taken a while – 16 months longer than planned, to be precise. And with a final bill north of £25 million too. A container crate, this ain’t. But at long last, Bob Bob Cité is upon us. The City sibling of Soho’s much-adored Bob Bob Ricard. And he’s one hell of a handsome chap.

High up the City’s Cheesegrater building, everything shines, sparkles, gleams and glimmers. The brass lamps that softly illuminate each table and the brass buttons on the waiter’s immaculately cut, double-breasted jackets. The pleasingly heavy cutlery, and the gossamer light glass. The LED display that races round the top of the room, both a nod to the City ticker tapes and a way of staff finding out which table needs champagne. 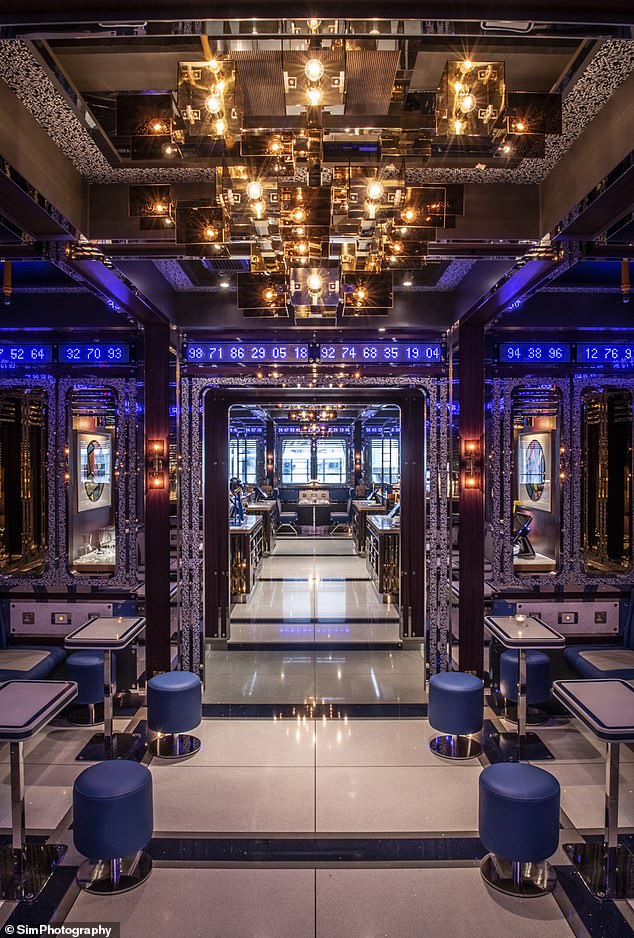 High up the City’s Cheesegrater building, everything shines, sparkles, gleams and glimmers

Yup, the famed ‘presser pour champagne’ button is back, alongside USB sockets to fuel the phone. There are glass-fronted wine cellars, with magnums of some of the greatest Burgundies and Bordeaux, and methuselahs of Moët, Tattinger and Veuve Clicquot. The bone china plates are Wedgwood bespoke, while the leather seats are as soft and supple as a baby’s cheek. Owner Leonid Shutov is not a man to do things by halves. Yet the overall effect is one of knowing opulence rather than over-the-top kitsch. It’s elegant rather than excessive, smart not showy. Most of all, it’s fun. Like being inside a digital clock. Made by Fabergé.

I can even forgive the dress code: ‘strictly elegant’. Which means no jeans, or trainers, or T-shirts. Or, usually, me. I have to put on a shirt. And smart shoes. And a jacket. One taste, though, of the cooking and I’d happily slip into a ballgown for another bite. Because that great and mildly mad Gallic genius Eric Chavot is behind the stoves. It’s damned good to have him back.

I go with friend and fellow food critic Grace Dent. We’re accompanied by Rafe and Stacey Offer, who bid to dine with us at a Roundhouse Gala charity auction. They’ve been deeply generous, and we want to show them a good time. No problems on that front.

Within seconds, there’s a chilled glass of Perrier-Jouët in our hands, and we’re off, into one of the greatest French onion soups to ever burn my tongue. The silky softness of the slow-cooked onions, the rich, resonant depth of a macho beef stock, the hunk of grilled baguette smothered in an inch of oozing comte. It’s as classic as they come, made to the recipe of Chavot’s mother. Merci Maman. Snails arrive hidden under the most ethereal of potato foams, embellished with shards of crisp bacon, yet what seems overtly showy really works. It adds another layer of texture to the garlic-drenched, softly chewy molluscs.

A tomato salad sees the fruit at their sweet, fecund best, served at room temperature and studded with silvery curls of anchovy. There’s a hint of orange in the dressing, and a whack of pistou, and a fistful of tiny Niçoise olives… the very essence of Provençal summer. Steak tartare, lovingly cut, is so beautifully seasoned and balanced, with slivers of shallot, cornichon and capers that there is no need for Worcestershire sauce and Tabasco. I only wish we had a whole raw egg yolk, rather than the pretty soft boiled quail’s egg.

Yup, the famed ‘presser pour champagne’ button is back, alongside USB sockets to fuel the phone

There’s that chicken pie, so adored at the original Bob Bob Ricard, but somehow better still. The burnished, buttery pastry inscribed with a crowing cock, the contents bathed in a magnificently sumptuous and sybaritic Sauternes and morel-spiked sauce. In short, the Louis IX of chicken pies. Chavot’s blanquette de veau, a dish we don’t see enough of, is a study in lovely beige, discreet, soft and entirely classic. Pomme puree is more butter than potato, as is right and Robuchon. Service is as slick as the polished floor’s sheen, yet discreet and unobtrusive too. Bob Bob Cité is a spectacle, a treat, and delight. One of London’s great dining rooms. With Chavot’s cooking to match.