Even toddlers care what others think! Children are aware of how others will judge them by 2

Even toddlers care what others think about them.

That’s according to a new study which has revealed toddlers are aware how others judge them by two-years-old – long before they learn to speak in full sentences, which usually occurs when a child is aged between 30 and 36 months.

However, the latest finding reveals young children are more aware of their surroundings than previously thought, scientists said.

This could help researchers better understand how and why we become sensitive to the opinions of others. 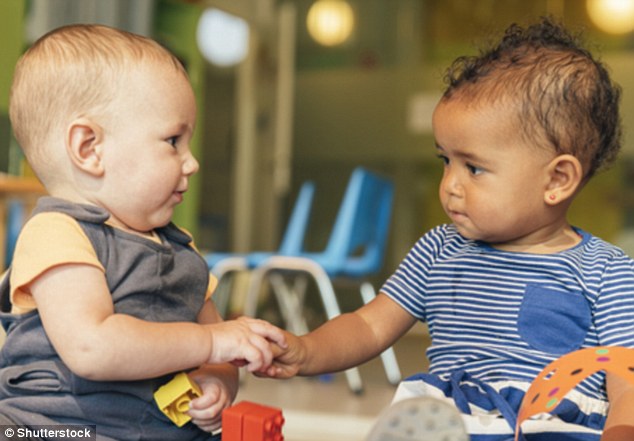 Even toddlers care what others think about them. That’s according to a new study which has revealed toddlers are aware how others judge them by age two – long before they learn to speak in full sentences (stock image)

‘Our concern for reputation is something that defines us as human,’ said lead researcher Sara Valencia Botto from Emory University in Atlanta, Georgia.

‘We spend resources on make-up and designer brands, are terrified to talk in front of an audience and conform to many of society’s standards because we are concerned with how others will evaluate us.

‘We believe our findings get us closer to comprehending when and how we become less or more sensitive to other people’s evaluation, and it reinforces the idea that children are usually smarter than we might think.’

The team conducted four experiments involving 144 children between the ages of 14 and 24 months using a robot toy.

In the first experiment, the researchers demonstrated in front of a toddler how to use the buttons on a remote to operate the robot.

They then either observed the child with a neutral expression or turned away and pretended to read a magazine.

When the child was being watched, he or she displayed more inhibition and embarrassment when hitting the buttons on the remote compared to when the observer was not paying attention, the researchers said. 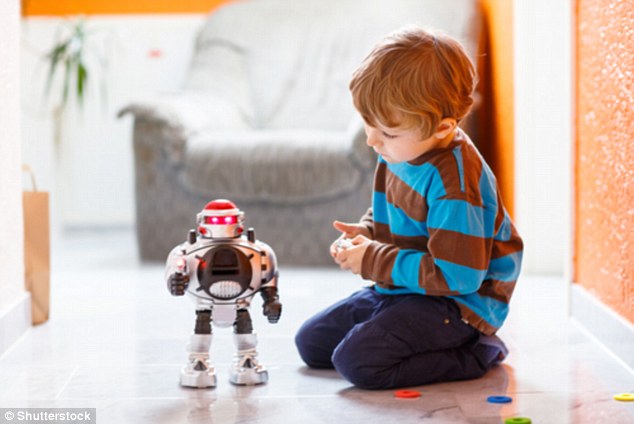 Researchers showed a toddler how to use a toy robot. When the child was being watched by an observer, he or she displayed more inhibition and embarrassment when hitting the buttons on the remote than when the observer was not paying attention (stock image)

This time, the researchers used two remotes during the demonstration to the child.

When it was the child’s turn to hit the buttons on his or her own, the researcher would either watch the child, or ignore them and read a magazine.

‘This behaviour is like older children who behave well and do good things while others are watching and misbehave when no one is paying attention.’

The third experiment served as the control.

For this, researchers gave a neutral response of, ‘Oh, wow!’ when demonstrating how to use the two remotes and again, alternated between observing the child and not.

Results showed children no longer chose one remote over the other depending on the attentiveness of the scientist.

‘This shows us that in experiment two, the children were paying very close attention to the positive and negative reactions of the researcher before making a decision of which remote to use,’ Ms Botto said.

The last experiment involved two researchers sitting side by side, using one remote.

Once the child had the opportunity to operate the remote, the researchers alternated either watching or turning their back to the child.

The children were much more inclined to press the remote when the researcher who had vocalised a positive response was watching, according to the study.

Across all four experiments, the researchers saw no difference in responses based on the gender of the child.

‘Our study offers strong support for the idea that very young children are much more attuned to their surroundings and others’ responses than previously thought,’ said study co-author Dr Philippe Rochat.

‘This is an important milestone in our understanding of human social cognition and development.

‘Further research needs to be done to examine if even younger children – those under 14 months– could be sensitive to the judgements of others.’

ARE CHIMPS OR CHILDREN MORE INTELLIGENT?

An experiment, the results of which were published in June, revealed most children surpass the intelligence levels of chimpanzees before they reach four years old.

The study, conducted by researchers at the University of Queensland’s School of Psychology, tested for foresight, which is said to distinguish humans from animals.

The experiment saw researchers drop a grape through the top of a vertical plastic Y-tube.

The researchers then monitored the reactions of a child and chimpanzee in their efforts to grab the grape at the other end, before it hit the floor.

Because there were two possible ways the grape could exit the pipe, researchers looked at the strategies the children and chimpanzees used to predict where the grape would go.

The apes and the two-year-olds only covered a single hole with their hands when tested.

But by four years of age, the children had to develop to a level where they knew how to forecast the outcome, and they covered the holes with both hands, catching whatever was dropped through every time.