Helmets, harnesses and crampons are obvious choices for mountaineers to pack when scaling the highest peaks around the globe – but in the heady days of the brave pionners attempting such feats for the first time, so too did they pack cigarattes in their thousands.

For their first ascent of Everest in 1953, Edmund Hillary and Tenzing Norgay took with them 15,000 cigarettes up the 29,029 ft mountain.

Although neither man smoked, both the expedition’s leader, John Hunt and deputy leader Charles Evans, were pipe smokers.

A new book reveals that many successful mountaineers, including Wilfred Noyce, a member of the 1953 British expedition to Everest, packed thousands of cigarettes and tobacco with them

Then there was British mountaineer Bill Tilman, who climbed Everest in 1935 and reached 27,200 feet without oxygen as the expedition leader in 1938 – but was rarely photographed without a cigarette or pipe in his mouth.

Those surprising historical footnotes feature in Mick Conefrey’s new book, The Last Great Mountain, published tomorrow to coincide with the 65th anniversary of the 1955 expedition that conquered the world’s third highest peak, Kangchenjunga.

Their preference for smoking is all the more surprising given that any point above 8,000m or 26,000ft is referred to as the ‘death zone’, where oxygen is so thin that it is insufficient to sustain human life for an extended time. 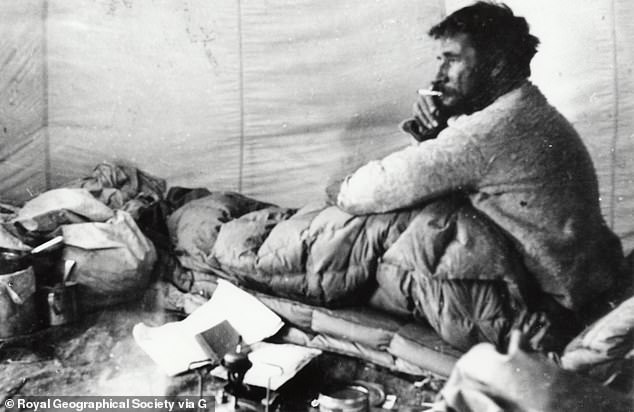 Bill Tilman, who climbed Everest in 1935 and reached 27,200 feet without oxygen as the expedition leader in 1938 was often photographed with a cigarette or pipe in his mouth

Those who stay within the zone without supplementary oxygen will almost certainly suffer a deterioration of bodily functions and eventually death.

Among those Conefrey interviewed for his book was Joe Brown, who ascended Kangchenjunga with George Band in 1955, The Sunday Times reports.

Known as ‘The Master’ and ‘The Human Fly’, Brown – who died last month aged 89 –  is said to have enjoyed 2,000 cigarettes on his expedition, including inside the tent he shared with Band, a non-smoker.

He told Conefrey that he regretted treating his climbing partner in this way and said:  ‘I’ve thought since, “What a horrible thing to do, to inflict it on George”, because he was in the tent too, and I’ve thought, “What a bastard”.’ 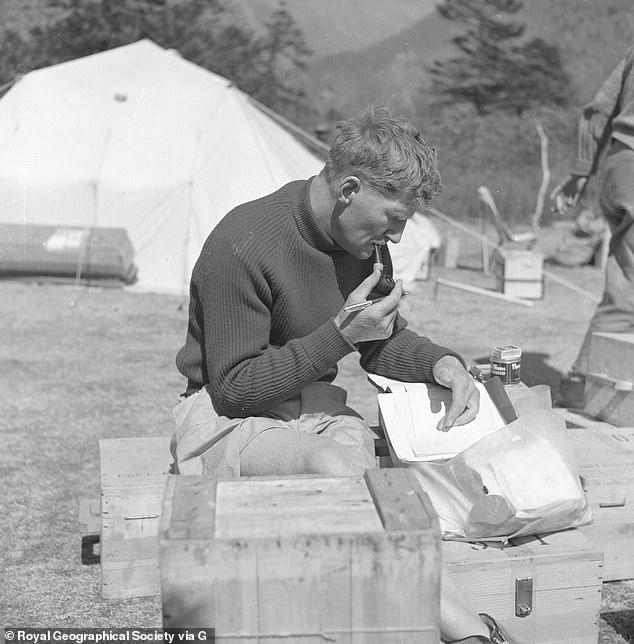 Despite their penchant for smoking, neither the success of Brown or his contemporaries appears to have suffered from the habit.

In fact, Australian chemist and mountaineer George Finch, who was the first person to climb above 8,000 metres, was a great advocate of using supplementary oxygen at high altitudes – but did so in between regular puffs on a cigarette.

Writing about his time as a member of the second British expedition under Charles Granville Bruce to Mount Everest in May 1922, in the official report, The Assault On Mount Everest, he said: ‘Cigarette smoking proved of great value at high altitudes.

‘At first we noticed that unless one kept one’s mind on the question of breathing—that is, made breathing a voluntary process instead of the involuntary process it normally is—one suffered from a lack of air and a consequent feeling of suffocation.

‘On smoking cigarettes, we discovered that after the first few inhalations it was no longer necessary to concentrate on breathing, the process becoming once more an involuntary one.’ 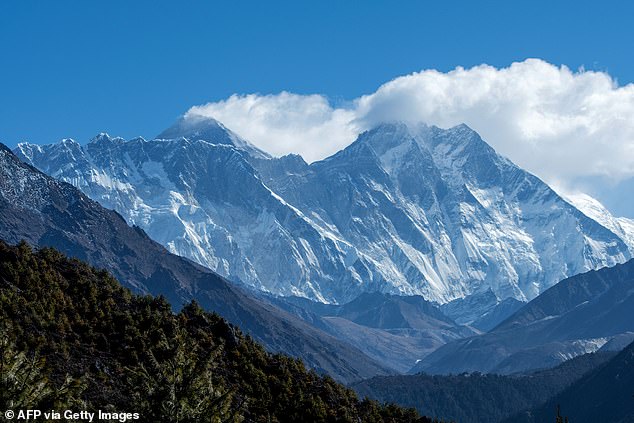 Mount Everest, which stands at 29,029ft, is the highest mountain in the world

He added that the effect of one cigarette lasted around three hours.

Even leading mountaineer Martin Boysen features in the book, recalling how he enjoyed a cigarette at 27,300ft, the night before he and his team became the first to ascend the south-west face of Everest in 1975.

‘It was one of the great pleasures of climbing,’ he added.