Dominic Calvert-Lewin suffers yet ANOTHER setback, with the Everton striker’s comeback from injury delayed by at least another week… ruling him out of this weekend’s trip to Southampton

Dominic Calvert-Lewin has suffered another minor setback and his anticipated return from injury has been delayed by at least another week.

Calvert-Lewin started the season with dreams of making it into England’s World Cup squad but there is little possibility of that happening now, as the earliest he will return to Premier League action is against Manchester United on October 9.

The striker was injured on the eve of the campaign and Frank Lampard had hoped to get Calvert-Lewin up-and-running against West Ham on September 18 but was forced to pull him out of that game and Everton’s manager will hold him back against Southampton, too.

The past 12 months have been a source of immense frustration for Calvert-Lewin but Lampard will not put any unnecessary pressure on the 25-year-old and will only restore him to his starting line-up when he feels the England international is physically ready.

‘I haven’t spoken to him about a confidence issue,’ said Lampard. ‘But, if there was, it would be completely understandable off the back of a few injuries if he felt like that.

‘Communication is key. I know what players are like – you tell the manager you are fine because you want back in. 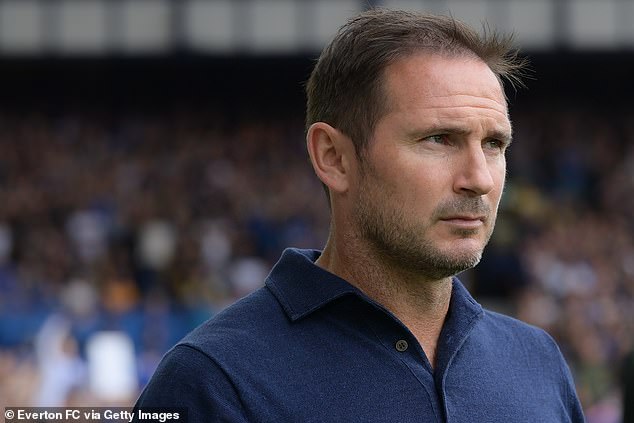 ‘I think what have come to is a very open conversation between myself, Dominic and the medical department to make sure we get him in the best possible nick because it is a long season. I don’t want to bring him back too early.’

Lampard added: ‘He was looking so strong in training in America during pre-season and then he got injured before Chelsea. I just want to get him back to that level where he was a machine, where he looked like the Dominic we all want to see.

‘It’s more making sure that Dominic is in the best condition. We have had a look at his plan and looked at some of his training to make sure he is in the best possible shape. I need to think is he ready to start again, should he be coming on.’