Frank Lampard’s plan to frustrate, irritate and harass Liverpool eventually fell down at Anfield – and his Everton side’s lack of a goalscoring threat is a weakness that threatens to follow them down to the Championship

The banner on the Kop at kick-off simply said ‘1995’ and was meant to indicate the last time that Everton won something.

But for Frank Lampard’s team, this was a day that was never really about winning. It was about not losing.

For a while Everton looked good for that. This was not their worst performance of the season by a long way. They were hard working, organised and ready for the physical challenge that first and foremost must be met if you are not to be rolled over at Anfield.

Ultimately, though, there was a flaw. If you are to take even a single point from a game at Liverpool then you must score simply because Jurgen Klopp’s team always will. And Everton did not score or even come particularly close.

Not until added time did Richarlison register Everton’s only shot on target and by that time the game was done.

So this was where Lampard’s plan to frustrate, irritate and harass Liverpool fell down. This was where it came apart and as he looks to plot a way out of the relegation zone over the next six games, it is a weakness that threatens to follow Everton all the way in to the Championship.

Only twice since early January have Everton managed to score more than once in a Premier League game. One of them was in losing recently against Burnley and both those goals were penalties. 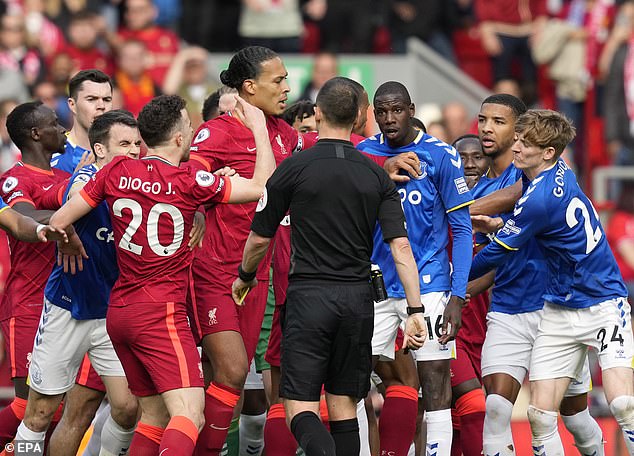 With Burnley above Everton after Monday’s results and due to play Watford away before Lampard’s team next kick a ball, the danger to the top division’s longest serving resident is clear.

It was hard to fault Everton’s game plan here on a day when the increasing levels of hostility between these two clubs was abundantly obvious. Had Lampard sent his team out to spar with Liverpool, they would have been on the floor pretty quickly.

So to see Everton sit deep, waste time and attempt to interrupt Liverpool’s rhythm was understandable. When Liverpool had the ball, the formation of those in blue was pretty much 5-4-1. If you wanted to be less generous, you could have called it 5-5 but they are the not the first team to do that at Anfield.

Their stalling tactics did little for the flow of the game or indeed the spectacle in the first half but it was up to referee Stuart Attwell to get on top of that. Attwell could, had he wished, have booked Jordan Pickford as the dallied over his goal kicks. He could have spoken to the precocious but rather emotional Anthony Gordon for twice kicking the ball away at Liverpool throw-ins. But he didn’t and so it went on. 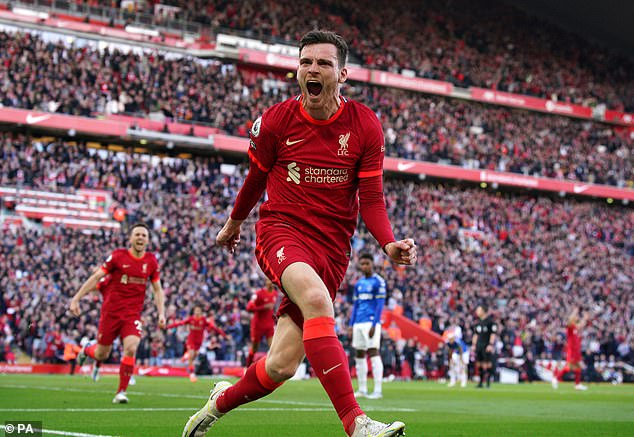 If that contributed to the general sense of chaos that occasionally engulfed the first half then Everton would not have minded. Liverpool sought a football match while Everton came for an arm wrestle and nobody should have been the least bit surprised.

What undermined it all from Everton’s viewpoint was a lack of clarity and precision when they did break up field. There were moments of opportunity, usually coming via Gordon’s pace and courageous running or the dexterity of Alex Iwobi or the leggy power of Abdoulaye Doucoure. But my goodness Everton lacked a centre forward, a focal point. My goodness they missed the injured Dominic Calvert Lewin.

The Brazilian Richarlison can be a pain for less capable defenders to deal with. He is hard enough to watch let alone play against. But here, unable to rattle Virgil van Dijk or the increasingly impressive Joel Matip, Richarlison spent too much time on the floor or in Attwell’s ear to genuinely advance his team’s cause. Richarlison has scored five goals from open play in the league this season and it is not enough.

Over the course of this game, Everton’s hope remained that they may frustrate Liverpool to the point where something strange happened. There were moments that threatened that. Gordon probably should have had a penalty when Matip tugged his arm at 0-0, for example. 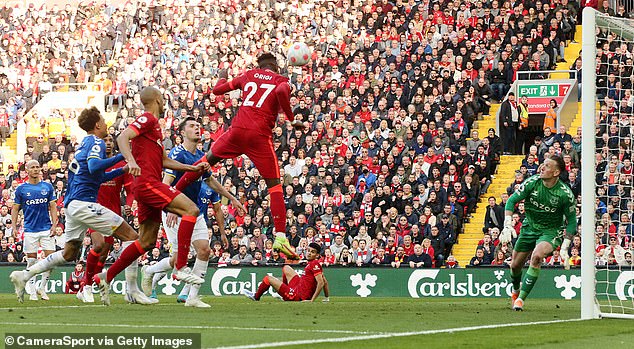 But Liverpool are too good – their squad too deep and too varied – to be denied for an hour and a half and once Klopp’s clever substitutions with 30 minutes remaining increased his team’s options, they found a little of their true selves to sweep their neighbours off their land.

Whether Everton now disappear from the Premier League map remains to be seen but this felt like a hugely significant day. If Burnley beat Watford on Saturday, Everton will be five points adrift by the time they face Chelsea the next day and if that is the case their two games in hand will suddenly feel like scant comfort.

Here across Stanley Park we saw one side of Everton’s face but between now and May 22 when they conclude their season at Arsenal, they must present us with another.

Everton will only survive if they step forward and take control of their own destiny. This is what Burnley have managed since sacking Sean Dyche and that is largely what has changed the shape of what lies ahead.