‘Every American should pay attention on monkeypox’: HHS official’s warning

Every American should ‘pay attention’ to the monkeypox outbreak because the disease could spill over into more groups than just gay men, the head of the Department of Health and Human Services (HHS) warned Thursday — as U.S. cases topped 4,600 to become the highest tally in the world.

Dr Xavier Becerra, secretary of the HHS, issued the stark warning during a press briefing, adding that infections with the disease were ‘painful’ and could also be dangerous. He did insist it was ‘absolutely’ still possible for the U.S. to eliminate monkeypox.

The vast majority of cases are still among gay or bisexual men, but last week America recorded its first two cases in children — in a toddler in California and infant traveling through Washington D.C. — and a pregnant woman who tested positive when she was near full-term.

Top experts have been warning for weeks that other groups could catch the disease because it does not require sexual contact to transmit, but only close contact such as hugs or brushing the rashes of an infected person.

Becerra’s comments came after the U.S. infection tally surged by 1,048 cases on Thursday to become the highest in the world, with officials warning it was set to continue to rise for ‘weeks’. California and New York accounted for 75 percent of the rise, which was blamed on ‘historic’ cases being added to the tally.

No deaths have been reported in the U.S. yet, with only one registered in Nigeria so far in this global outbreak of more than 20,000 cases. But there are concerns that should the disease spread to more vulnerable groups — including children and pregnant women — more fatalities will be recorded. 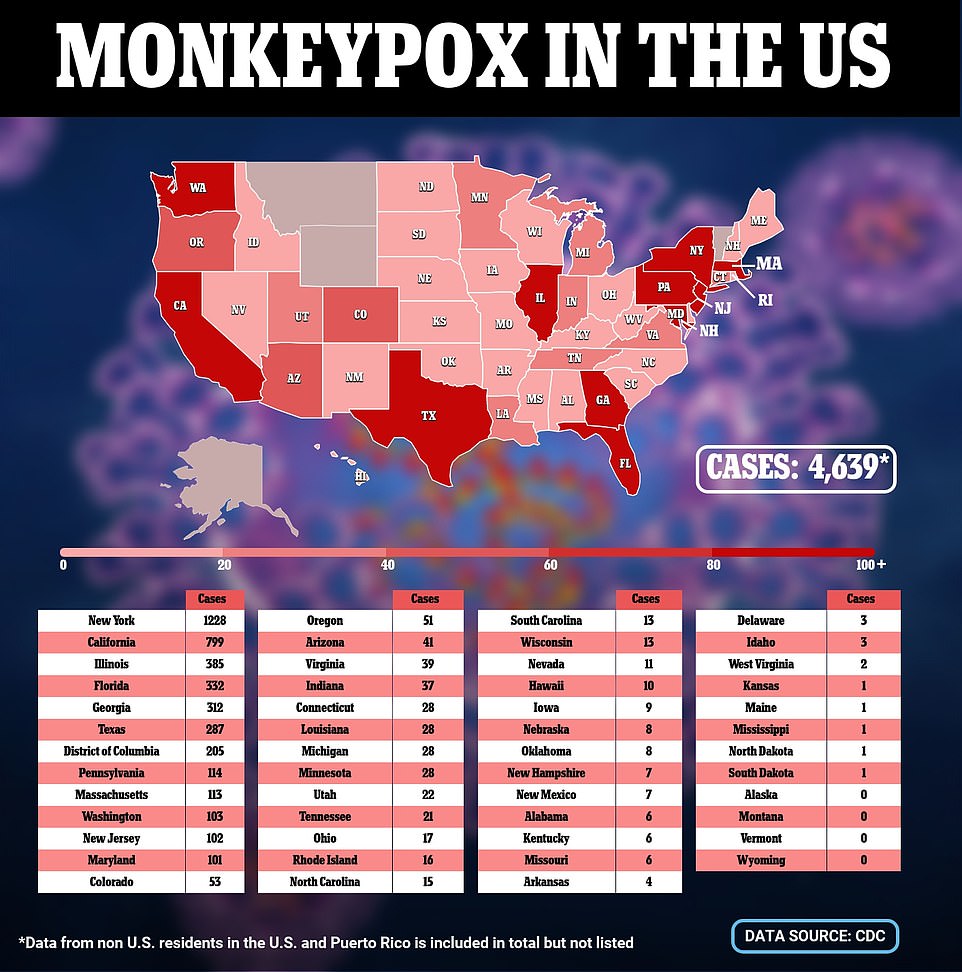 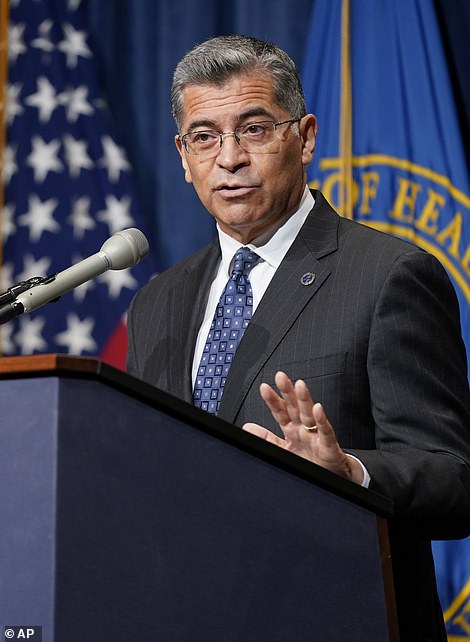 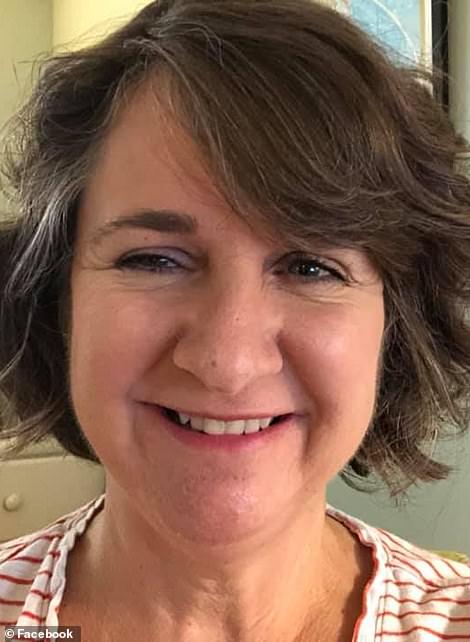 Dr Xevier Becerra, who heads up the Department of Health and Human Services, warned all Americans should be worried about the spread of monkeypox. Captain Jennifer McQuiston, who is involved with the response at the CDC, warned that cases would likely continue to rise for weeks

At the Centers for Disease Control and Prevention’s (CDC) conference, Becerra warned: ‘Every American should pay attention on monkeypox.

‘Monkeypox is not Covid, but it is contagious, it is painful and it can be dangerous. At the HHS our goal is — stay ahead of the virus, and to stop the outbreak. We are doing everything we can in that regard.’

He added: ‘On the question can we not only stay ahead but end this outbreak — absolutely. We believe we have done everything we can at the Federal level [for this].’

A pregnant woman has tested positive for monkeypox in the United States, a Centers for Disease Control and Prevention (CDC) chief revealed yesterday.

The woman has now given birth to her child, who does not appear to have caught the rash-causing virus from the mother.

CDC released limited information on the case, including where in the US the woman was based. It’s also unclear when the woman was infected, or exactly when she gave birth.

Health officials said both were ‘doing well’, but the nation’s top infectious diseases expert Dr Anthony Fauci warned Tuesday that pregnant woman may face a ‘profound risk’ from the virus.

A maternity doctor told DailyMail.com that women in the early stages of pregnancy faced the biggest risk from monkeypox. The mother may have been in the final stages of her pregnancy when infected, as she recently gave birth.

The newborn received immune globin, an infusion of antibodies capable of fighting diseases including monkeypox, officials said. It is not clear what treatment the mother received.

It is the first infection to be detected in a pregnant woman in the United States, and comes after America recorded its first two infections in children last week. The pediatric cases were unrelated and detected in California and Washington D.C.

Becerra also called on every American offered the vaccine to get one, pointing out that even with Covid — which may still be more deadly than monkeypox — many Americans have still not got the jab.

Nearly 800,000 more doses of the vaccine have arrived in the United States and are now being made available to states, they revealed today. This is more than double the total 338,000 that have been dished out so far.

Health officials also say a further 5.5 million are due to arrive by May next year, with another 11.1 million in storage to be called upon if the outbreak worsens.

Most states are currently rolling out vaccines to close contacts of reported cases, with New York City and Washington D.C. offering them to all gay or bisexual men who have multiple sexual contacts in a fortnight. Both have cut plans to offer a second dose — usually given 28 days after the first — due to a lack of supply.

Yesterday top officials also took to the airwaves to warn men who have sex with men to ‘limit’ their sexual contacts to help curb the spread of the disease.

Dr Jennifer McQuiston, a pathology expert at the CDC, told the briefing almost every monkeypox case had been spotted in a man, with the ‘vast majority’ saying they had sex with other men. They were aged 35 years on average, with the oldest being 76.

About two-fifths of cases were detected among white men, while another two-fifths were in the hispanic population and almost 30 percent were among black individuals. Four percent were Asian.

Almost every case has experienced a rash during their infection, with fatigue, fever and swollen lymph nodes making up the rest of the four most common symptoms.

No deaths from the disease have been reported in the U.S. to date, but there are mounting fears that it could spill over into more vulnerable groups including children and pregnant women.

The disease only requires physical contact to spread — such as cuddles or brushing the arm of an infected person — or can be picked up from scabs from a patient left on bedding. Sexual contact is not necessary.

This week the CDC revealed the first two cases in children — in a toddler from California and an infant who was traveling through Washington D.C.. Another infection was also detected in a pregnant woman, although the location has not been disclosed.

Health officials say all cases are ‘doing well’. But data suggests children under eight years old are at higher risk of severe disease than adults. Pregnant woman are also more at risk, particularly those in the first ten weeks of pregnancy where the disease could lead to abnormalities in organs forming in the baby.

Other experts have warned monkeypox has likely already spilled over to other groups, but that this is not being detected yet because officials are doing too few tests. 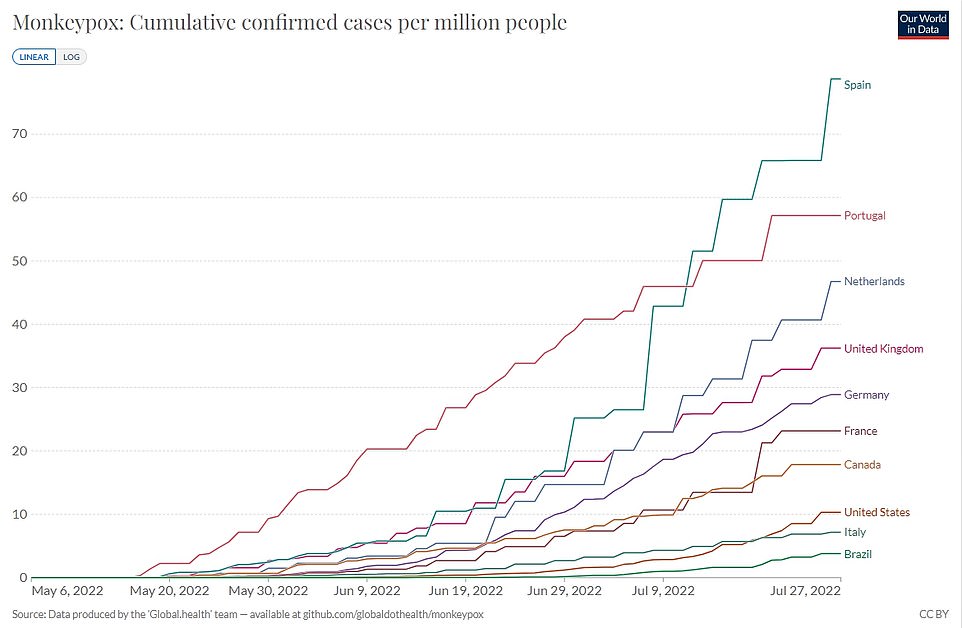 Dawn O’Connell, the assistant secretary for preparedness and response at the HHS, said there were a further 11.1million doses available to the U.S. in Denmark that were currently in storage.

She said these would be deployed with further funding from Congress, and if it was deemed necessary should cases escalate.

Yesterday another 1,048 cases of monkeypox were recorded in the U.S., with McQuiston saying most of this number was ‘historic’ with infections only now being added to the tally.

It makes the U.S. outbreak the largest in the world, with Spain — among the first countries to record cases — behind with 3,738 infections alongside Germany with 2,540.

But when the data is looked at in terms of population — which is more accurate because it takes into account country sizes — it shows out of the top ten countries with the highest case tally the U.S. has the eighth largest outbreak.

At the top of the table is Spain, with the most cases per resident, followed by Portugal and the Netherlands.