Every style move that Kate makes this woman will copy

Mallory Bowling is part of a global community of so-called RepliKates – women so devoted to the Duchess that they spend all their time (and money) trying to emulate her. Eimear O’Hagan meets them

Old-school royal enthusiasts – all headscarves, flags and Thermos flasks – have been sidelined in recent years by a new breed of Windsor-watcher, eager to catch a glimpse of Kate or snap her on their smartphone, and passionately devoted to channelling her look.

From ‘style stalking’ – copying what she wears – to zealously following social media for snippets of news, and queueing for hours just to cast a fleeting glance at her, not to mention the often vicious sniping between rival fans of Kate and Meghan on Twitter, we’re in the throes of an obsession that outstrips even the hysteria that surrounded Diana.

@lady.m.replikates ‘I’m a ‘RepliKate’ – one of a global community of thousands of women who are passionate about emulating Kate’s style in our day-to-day lives,’ says Mallory Bowling

So what is it exactly about the Duchess of Cambridge that evokes such fervent adoration? Her superfans reveal all…

Mallory Bowling, 31, is a lawyer and lives near Washington DC in the US with her husband James, 33, also a lawyer

I’m a ‘RepliKate’ – one of a global community of thousands of women who are passionate about emulating Kate’s style in our day-to-day lives. We share photos of ourselves in Kate-inspired outfits on social-media forums – I have over 17,000 Instagram followers for my @lady.m.replikates account. It’s a thrill when someone compliments my look. 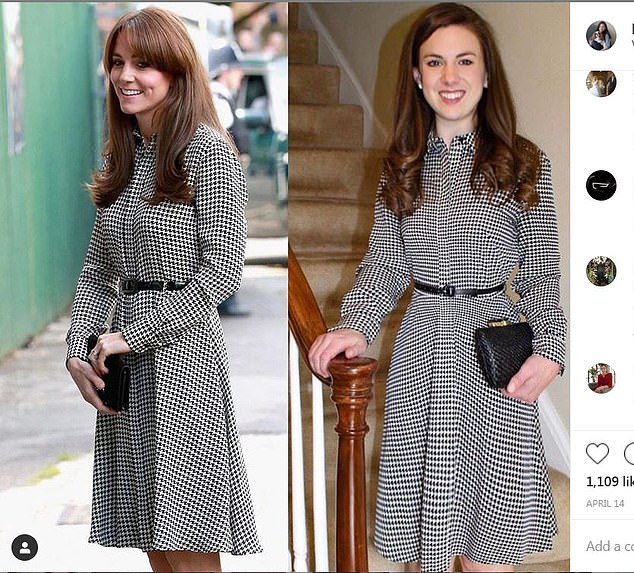 Once Kate is pictured in an outfit, I’m in a race against time to track it down because it’s guaranteed to be a sellout. The RepliKates will join forces to help one another – we’ll buy as many of the outfit as possible and sell them on to those who weren’t able to get one, posting them all over the world. As we’re in different time zones, while I’m asleep one of my UK RepliKate friends is shopping online for Kate’s latest dress for both of us.

I source outfits online from shops’ websites, Ebay and US fashion site Poshmark, as well as relying on fellow fans to help me. There’s nothing like the thrill of getting my hands on something Kate has worn. I prefer to buy the same designers and labels she wears, including LK Bennett, Hobbs and Jaeger, because the quality and cut is good, so it’s a better investment. I love the fact that Kate often ‘recycles’ her outfits, as it means I can wear mine again and again too, emulating her thrifty ways. 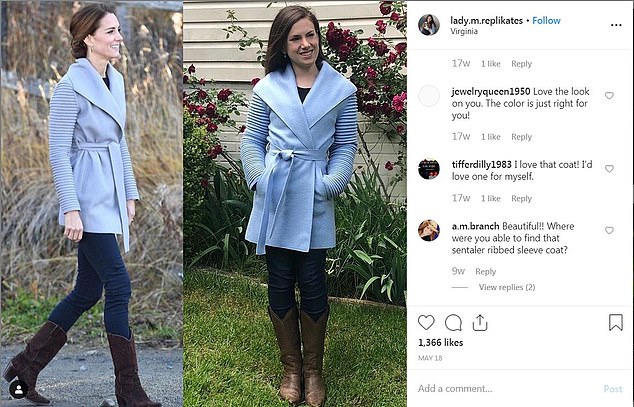 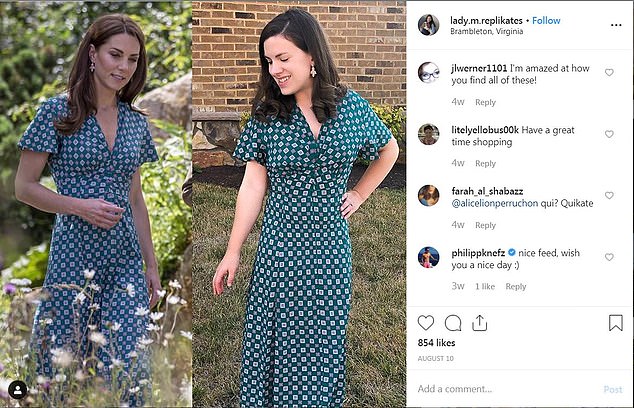 I’ve been doing this since 2011. I fell in love with the blue Issa dress Kate wore for her and William’s engagement announcement, and managed to buy a copy of it for myself. I haven’t looked back since, keeping up with her wardrobe choices by following lots of Twitter and Instagram accounts dedicated to her, as well as scouring online sites for new photos.

I don’t keep an exact track of how much I’ve spent over the years – it’s in the thousands – but I wear the clothes I buy, I don’t ‘collect’ them and put them away in the wardrobe only to be looked at. I wear them to work and socially. Fortunately a lot of what Kate wears is from the high street so it’s reasonably priced. 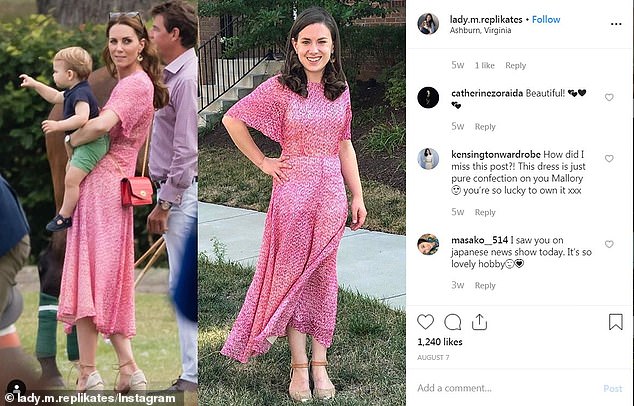 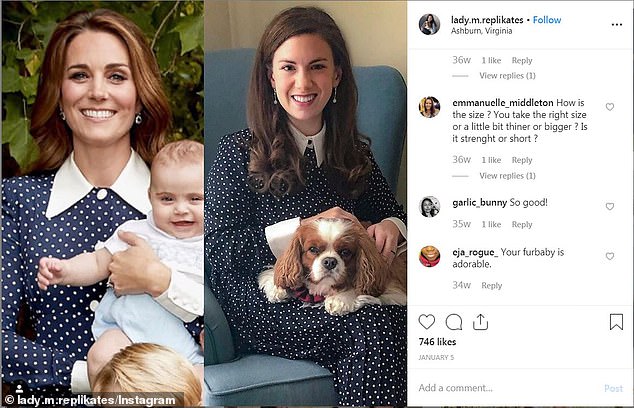 ‘My husband tends to roll his eyes when he sees me sitting up late bidding on a dress on Ebay. In his wedding vows he even joked that he promised to put up with my love for Kate – love me, love Kate, is what I tell him!’

If I know I have a tough day ahead I will put on a Kate outfit and immediately my confidence is boosted. I feel a connection to her and I’ve watched her grow in confidence over the years. I feel as though she’s in such a great place now – a mother of three, very assured when carrying out her royal role and, as for her personal style, she’s never looked better.

I grew up loving the Royal Family but when Kate and William got engaged I began to focus on her. Hers is the perfect Disney fairytale, and I, like many American women, bought into the romanticism around her ascent. For us, the idea of becoming a princess or queen and living in palaces is absolutely fascinating. 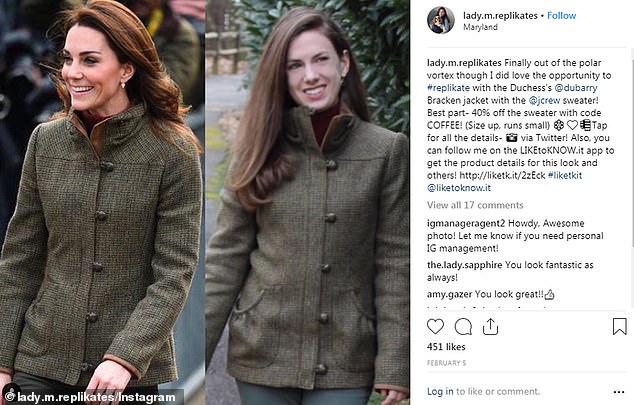 ‘I’ve visited the UK several times and have been to Kensington Palace hoping to catch a glimpse of Kate, but sadly I haven’t yet. That’s the dream’

My husband tends to roll his eyes when he sees me sitting up late bidding on a dress on Ebay. In his wedding vows he even joked that he promised to put up with my love for Kate – love me, love Kate, is what I tell him! On our wedding day in 2017, I wore a tiara like Kate and our cake was modelled on her and William’s.

I’ve visited the UK several times and have been to Kensington Palace hoping to catch a glimpse of Kate, but sadly I haven’t yet. That’s the dream. 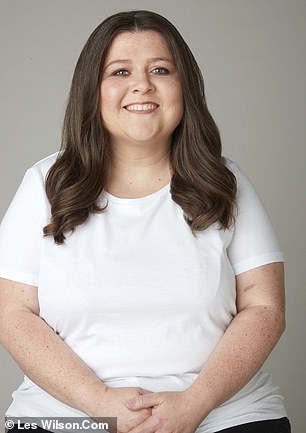 Karen Anvil, 41, is an auxiliary nurse and mum to Rachel, 18

Karen Anvil, 41, is an auxiliary nurse and mum to Rachel, 18. She lives in Watlington, Norfolk

My love of Kate has changed my life. On Christmas Day 2017, I was among the crowds at St Mary Magdalene church in Sandringham when she arrived with the rest of the Royal Family for the traditional service. After spotting a gap in the crowd I somehow managed to wriggle myself to the front. As Kate, William, Harry and Meghan (who were at that time engaged to be married) walked past I called out ‘Merry Christmas’ and took a quick snap on my phone.

I was so excited to see beautiful Kate up close, I quickly tweeted my photo with no thought for what would happen next. I hadn’t anticipated in the slightest that it would go viral, still less that I’d have to get myself a photographic agent to cope with the demand from media around the world!

To date that photo of the ‘Fab Four’ has made me more than £40,000 and I still receive royalties from it every month.

I’m a single mum and at the time worked two jobs to support my daughter Rachel. That year had been a particularly hard one for me; I’d been diagnosed with post-traumatic stress disorder after witnessing a violent incident, and I was feeling burnt out. Thanks to that photo, I’ve been able to take a year off work to rest and recuperate.

I’ve always loved the royals and feel as though I’ve grown up with William. The moment Kate was identified in the press as his girlfriend, I was hugely interested in her – this ordinary, beautiful girl who had fallen for a prince. One day, I’m going to tell her in person what an enormous difference she has made to my life. 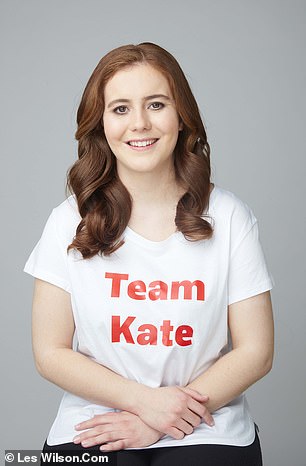 ‘My name may be Megan but my heart belongs to Kate’

‘I couldn’t stop crying when I met her’

Megan Winzer, 22, works in PR and lives in London

My name may be Megan but my heart belongs to Kate. My friends even call me the Duchess of Winzer!

Every minute of the day I met Kate is etched on my memory. It was 17 January 2018 at Coventry Cathedral, I still get goosebumps thinking about it.

The day before, I’d travelled three hours by train from my university town of Lincoln. I stayed overnight with my sister then got up at 5am to stand in freezing darkness waiting for her with hundreds of other fans. When she approached me at the front of the crowd, I said, ‘Welcome to Coventry’, a line I’d practised in my head over and over again – and then she smiled, said thank you and moved on to the next person.

I cried on and off for the rest of the day, overwhelmed with emotion. I’m normally very calm and was taken aback by the impact meeting her had on me. It was such a special experience. She was so beautiful, in a gorgeous fuchsia pink coat.

As a teenager I was quite shy and although I was only 13 when Kate and William got engaged, I recognised that quality in her, too. It was clear she was nervous with the eyes of the world on her, but she kept her cool, and I found that really inspiring. When I became head girl of my school a few years later I tried to channel her confidence and composure.

As well as meeting her in person, I’ve also visited the Lindo Wing of St Mary’s Hospital in Paddington, posing for photos on those iconic steps just like she did after having her children.

In fact, the day she gave birth to George in July 2013 I ended up being late for my first ever date because I refused to leave home until I’d seen her come out with the baby on TV! Thankfully my date was very understanding.

Kate has it all. She is glamorous, kind, articulate, intelligent and a devoted mother. You just know she’s never going to get dragged into a scandal or put a foot wrong.

The appeal of the Duchess is rooted in fairytale fantasy, says psychotherapist Ali Moore

According to Ali, the fact that Kate is a ‘commoner’ who fell in love with a prince and is now living a life of luxury in a palace, ‘is straight out of a storybook, a narrative that many women were exposed to from a young age. The Duchess is living many women’s dream, and because she came from a “normal” background, that makes her very relatable, which further fuels her appeal.’

She’s also educated, beautiful, stylish and intellectually and aesthetically aspirational, which, says Ali, ‘in terms of prompting adulation, ticks all the boxes. The difference between devotees of the Duchess and fans in the past of women such as Diana is that modern technology has enabled them to take their passion to new levels.’ Thanks to the internet and social media, they can follow her 24/7 and communicate with other supporters worldwide. That fuels not only their interest in Kate but also a feeling they are somehow connected to her. ‘We have so much more insight into her life, compared with royals in the past,’ says Ali, ‘that many fans feel they know her.’

Ali believes that in the right measures, being a superfan can have some benefits. ‘It can provide escapism, and that’s healthy. We all sometimes need to step away from daily life for our mental wellbeing, and if that means browsing Instagram for photos of your favourite duchess, or going to see her at a formal engagement, that’s fine.’

However, Ali warns that there can be a destructive, darker side to being an overly dedicated duchess devotee. ‘Problems arise when it starts to encroach too much on your time, your relationships and normal life; when it stops being just for fun and becomes obsessional.’

Ali believes that ‘comparison-itis’ is a common modern affliction. ‘If you constantly compare your own life, body and looks to Kate, it can have a serious impact on your self-esteem.’ Also, when so much time and energy are devoted to being a fan it creates a sense of ownership. ‘Part of the reason we’re seeing a backlash against Meghan is because she’s not always fulfilling expectations of how we think she should behave. That sense of disappointment is also unhealthy.’