This fashionably gender-fluid new musical may change things, but career options for 16-year-olds in Sheffield don’t currently include becoming a drag queen. But that’s what Jamie New dreams of. Above all, he wants to go to the end-of-year school prom in a frock, eyeliner and lippy.

What’s to stop him being his role model, Carol Vorderman? Certainly not his adoring mum, who buys him a pair of red high heels and a dress of his choice from a shop run by a bloke who used to be drag queen.

Standing in Jamie’s way is a father who cruelly rejects his effeminate son, a classroom bully who thinks he’s too much of a ‘minger’ to become a girl, and the school itself. Career advice from his sexually frustrated teacher is to become a forklift truck driver. 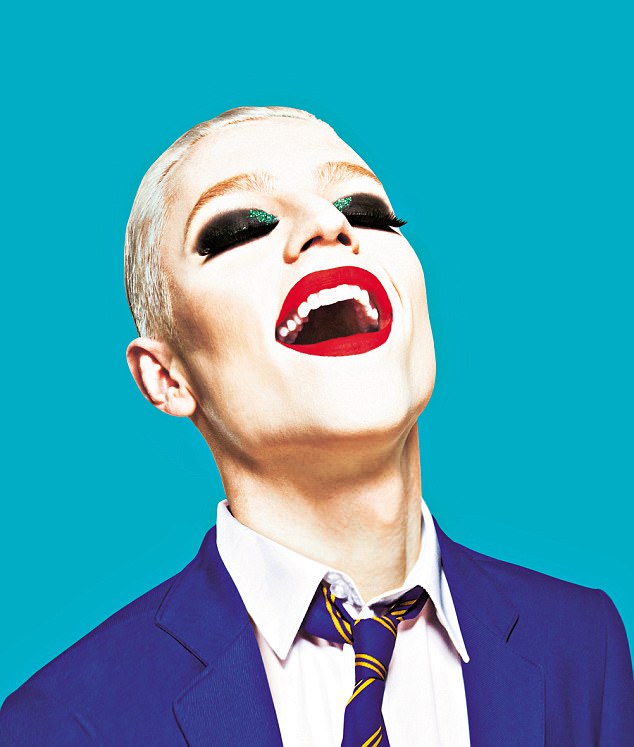 With legs like blanched celery, John McCrea holds this show together. His glorious, peroxided performance as Jamie has more mince than a butcher’s window 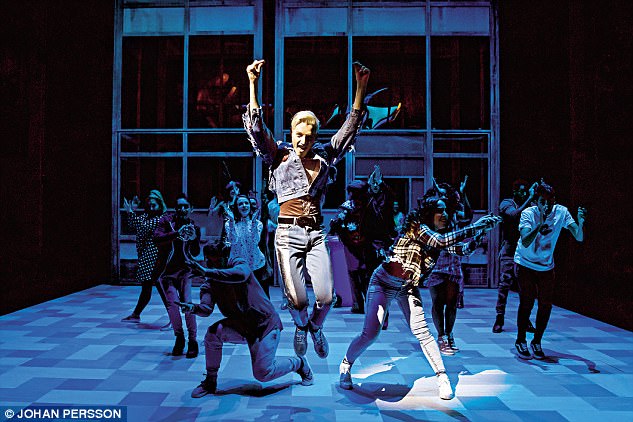 Composer Dan Gillespie Sells (lead singer of pop act The Feeling) and lyricist-librettist Tom MacRae have based this story on a 2011 TV documentary. It comes with hints of other musicals, most obviously Billy Elliot, plus shades of La Cage Aux Folles and other feather-boa musicals where life is less of a drag when it’s in drag.

With legs like blanched celery, John McCrea holds this show together. His glorious, peroxided performance as Jamie has more mince than a butcher’s window. To watch him sashaying across the kitchen with brown sauce in hand is reason enough to buy a ticket.

However, the show’s ‘don’t let them stamp on your dreams’ message feels uninvaded by reality. The possibility that a career as a diva on the cabaret circuit might be one of lonely drudgery is ignored.

The evening is a pretty simple assertion of the need for more camp glam up North. But it also gives us an insight into what drag is really all about, and shows just how sad a fatherless adolescence can be.

This new musical is set in the Cardiff docklands area, birthplace of Shirley Bassey, once home to dozens of itinerant workers of all races and languages. A co-production with Cape Town Opera, it’s a sort of Les Misérables for dockers with a cast of urchins from Oliver! and a dollop of South African a cappella singing, all staged on a set dominated by a vast ship’s prow. 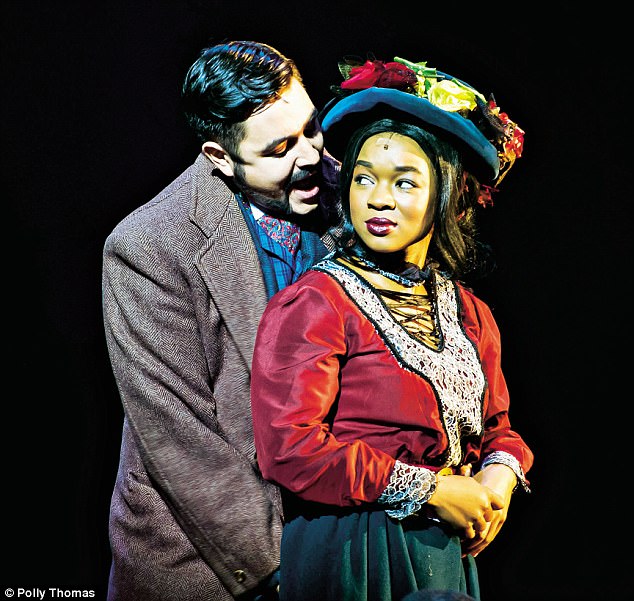 The story concerns a harbourmaster with a vicious past, an African worker who recognises him from the Boer War and ten coal-smudged, labouring children, one of whom has a fashionable transgender secret. The grieving local mining magnate, the 3rd Marquess of Bute, is played by John Owen- Jones in a role that rather under-uses him.

The inventive genius of the show’s co-director, Melly Still, is puzzlingly absent, though it all bursts with Welsh pride.

The show’s short run ended last night and it has nil hope of a transfer.

The Cornwall-based Kneehigh company has ambitiously taken on Günter Grass’s sprawling 1959 novel about a boy, Oskar, who decides never to grow up. Here Oskar is a 2ft-tall, bald, mirthless puppet with a magnetic stage presence. He bashes his tin drum and can shriek so loudly that glass shatters.

The rambling, impossible-to-fully-follow story (adapted by Carl Grose and directed by Mike Shepherd) is set in the maelstrom of war-torn Europe. A cast of a dozen plays Oskar’s far-Right father, feisty granny and the singing chorus of citizenry in this operatic parable told against a background of dropping bombs, firing squads and atrocities of war. 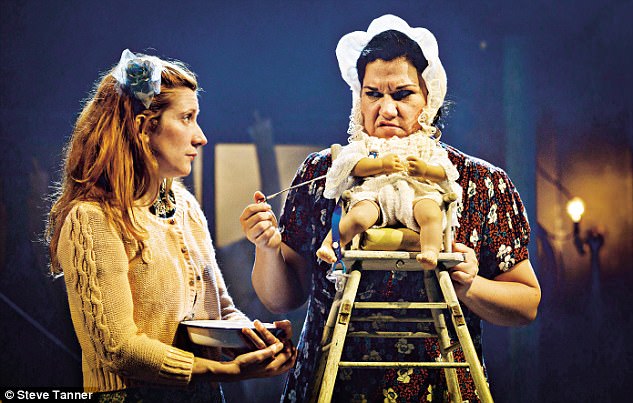 Above: Bettrys Jones and Beverly Rudd. It’s funny one minute, utterly tragic the next, and Charles Hazlewood’s score is terrific, with hints of Bowie and techno

While the staging has a fairy-tale quality – there’s a superb Christmas goose – the show has its finger on the pulse of a Europe littered with troublesome ‘ethnic sub-groups’. You can feel in its text the rising sap of fascism. It has the sinister ring of a story about the future, not the past.

It’s funny one minute, utterly tragic the next, and Charles Hazlewood’s score is terrific, with hints of Bowie and techno but also a German cabaret feel.

In recent years, Kneehigh has become a bit samey. This, though, is truly inspired – emotional storytelling that bashes both tin drums and ear drums. You come out feeling you’ve been through something spooky, weird and rather wonderful.

A decadent, late 19th-century England – with opium smoke and the ghost of Oscar Wilde – is the setting for this version of Shakespeare’s romcom.

Kara Tointon plays a grieving Olivia in black lace in her lavish country pile, and Nicholas Bishop’s Duke Orsino is a society portraitist whose real food of love is a male model. 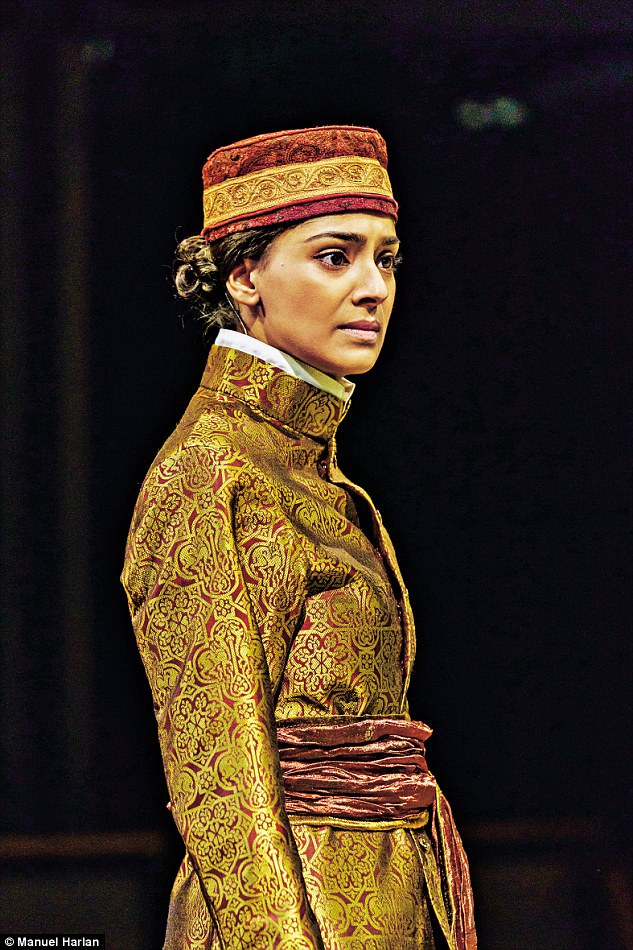 A decadent, late 19th-century England – with opium smoke and the ghost of Oscar Wilde – is the setting for this version of Shakespeare’s romcom. Above: Dinita Gohil as Viola

The biggest surprise is Adrian Edmondson, superbly bitter as Malvolio, whose racism and sense of vengeance sprays welcome vinegar over this whole box of chocolates.

The double-act between Sir Toby Belch and Aguecheek is a bit forced but Christopher Luscombe’s lavish, amiable production is nearly all there. It’s certainly gorgeous to look at, stuffed with tunes, and – like his previous Much Ado About Nothing and Love’s Labour’s Lost double bill – Christmassy in feel.