‘Everyone wants to beat us’: Virgil van Dijk insists Liverpool can handle pressure

‘Everyone wants to beat us.. we have to enjoy it’: Virgil van Dijk believes Liverpool can handle the pressure of being Europe’s most-wanted team

Virgil van Dijk insists Liverpool can handle the pressure of being Europe’s most-wanted team and is not concerned by their opening Group E defeat.

Liverpool became the first side since AC Milan in 1994 to lose the first match of their Champions League defence and the 2-0 reverse in Naples, which featured a rare Van Dijk mistake, has put pressure on their next game against Red Bull Salzburg in two weeks.

The frenzied celebrations at the final whistle gave an indication of how much stock Napoli had placed on beating the holders, but the Holland international is adamant Liverpool can cope with expectation.

‘Everyone wants to beat us, no matter what competition,’ said Van Dijk.

‘That’s something we have to deal with, but that’s not going to be a problem — we have to enjoy it as well.

Van Dijk refused to enter the debate about the contentious Dries Mertens penalty that gave Napoli a 82nd-minute lead. 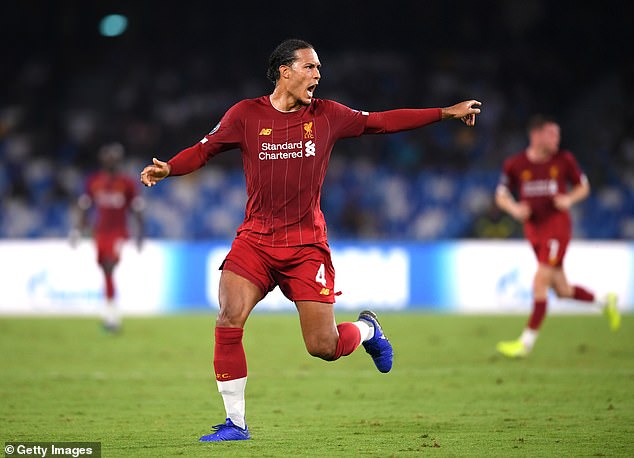 ‘I thought it was going to be a draw. The penalty changed it all and you’re going home with no points, but it shouldn’t be a wake-up call.

And he added: ‘We’ve been performing since the start of the season outstanding so there’s no reason for panic. The majority in the game we played well, we put them under pressure and created opportunities.

‘There were lots of positives, the only thing that was not positive is the result.’

It proved a rough night for Reds fans too. Some were targeted by attacks from Napoli’s ultras, who raced around on scooters.

A male supporter needed hospital treatment after he was struck on the head before the game and collapsed at half-time. Liverpool’s chief executive Peter Moore stayed with him until he was seen by medics and police.