Counsel assisting the inquest Kirsten Edwards outlined the details the night Theo went missing, including showing CCTV footage of Theo at Cheeky Monkeys bar and occasionally stumbling after he left.

A security guard who thought he was swaying had ejected him about 11pm.

However, the evidence he was actually intoxicated was ‘ambiguous, Ms Kirsten Edwards said.

The decision to kick him out on his own without any chance to tell his friends has caused Theo’s family ‘great distress, Ms Edwards told the inquest.

She said despite looking up directions to his hostel on Google Maps, Theo walked in the opposite direction to the route.

His subsequent decisions would be hard to believe if investigators didn’t have Google data obtained by his family, Ms Edwards said.

Despite looking up directions to his hostel on Google Maps after being ejected from Cheeky Monkey’s, Theo walked in the opposite direction to the route

Theo’s Queensland-based cousin Lisa Hayez gives evidence that she retraced the steps he took towards Tallow Beach and Cosy Corner on the night he disappeared, and that Theo would never take that route alone.

‘It was scary,’ she told the inquest.

‘I could see him starting the walk but he would probably have stopped once he started to go into the deep bush land and be like, that’s not safe for me to do by myself.’

Ms Hayez, who had travelled with Theo in Australia, insisted the engineering student-to-be was an expert user in Google Maps and would never have got lost.

She confirmed he was not a big drinker, and when in the company of others, he would sometimes dilute cask wine with orange juice to make it taste better.

Ms Hayez and Theo’s cousin Michael Dorkham told the inquest how they managed to trace Theo’s final movements by hacking into his online accounts.

They traced his tragic last steps on the night he disappeared by accessing his social media, email and Google accounts immediately after he vanished.

It was revealed information which could reveal if Theo was alone or not still remains inaccessible because Google has blocked the release of crucial search query data.

CCTV footage is played at the inquest showing Theo sitting in a bar booth at Cheeky Monkeys nightclub in deep conversation with Dutch backpacker, Sander Stadegaard.

Google search data on his phone reveals that during the chat, he looked up information on a tiny little-known town an hour away from Byron called Coraki.

The Dutchman had only met the Belgian for the first time earlier that night and discussed European politics over beers in the bar while sitting next to each other.

The lawyer for Theo’s family, David Evenden told the inquest Theo googled Coraki on his phone shortly after he sat down beside Mr Stadegaard – but the backpacker said he had no idea why.

Mr Stadegaard insisted he had no knowledge of the town or any memory of looking at maps on Theo’s phone.

He said he spent about 20 minutes talking to Theo in the bar before deciding to move on to a different bar, as he was disappointed by Cheeky Monkey’s.

Mr Stadegaard said Theo at no stage looked or sounded drunk, and only had one beer with him while he was there. He said there was no suggestion of any drinking games.

Security guard Shannon Mackie, who kicked Belgian backpacker Theo Hayez out of a Byron Bay nightclub before he went missing, answered ‘it’s possible’ he wasn’t drunk on the night he went missing.

Mackie had removed the 18-year-old from Cheeky Monkey’s in Byron Bay after deciding he was ‘approaching intoxication’.

Asked whether Theo appeared intoxicated in CCTV shown to him, Mr Mackie replied: ‘Not in that footage.’

Counsel assisting Ms Edwards asked if Mr Mackie was confident of his assessment that Theo was approaching intoxication. 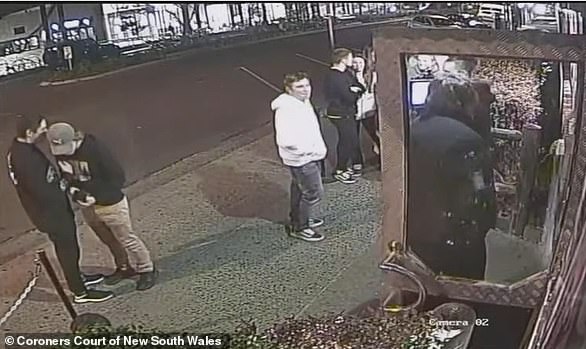 The moment security guard Shannon Mackie (left) tells Theo Hayez (with cap on) he will not be allowed back into Cheeky Monkey’s on the night of May 31, 2019

Head of security at the club Bradley Hill was standing at the entrance of the club as Mr Mackie conducted the assessment of Theo.

He agreed he was not paying full attention to the scene because he trusted Mr Mackie and it ‘wasn’t my eviction’.

Asked about his police statement on Theo’s speech being slurred, Mr Hill said: ‘At this point in time, and looking at that footage, when he was talking to Shannon I must have overheard it.’

‘Is it possible you’re mistaken about hearing his speech? Ms Edwards asked.

‘It could be, it could have been a different eviction,’ Mr Hill replied. ‘I could be remembering another removal.’

He agreed the footage did not suggest Theo was drunk.

At one stage during Mr Mackie’s evidence when discussing how Cheeky Monkey’s looked after intoxicated people once they were removed from the premises, Theo’s father Laurent shook his head, waved his hand and walked out of the courtroom.

Theo’s childhood friend Lou Gymorey testified about the messages she exchanged on Facebook Messenger on the day he disappeared. She had sent him a message alerting him to the fact Irish band U2, one of Theo’s favourite acts, were touring Australia in September.

‘Do you know when they’re coming? Where?’ he replied.

Ms Gymorey responded a few hours later telling him the date was September but that she wasn’t sure exactly.

Theo responded around 12.30am from Byron Bay. ‘Well, in September, what?’

Ms Gymorey then sent three messages to Theo at 2.33am Byron Bay time.

‘He didn’t get these messages,’ Ms Gymorey told the inquest. 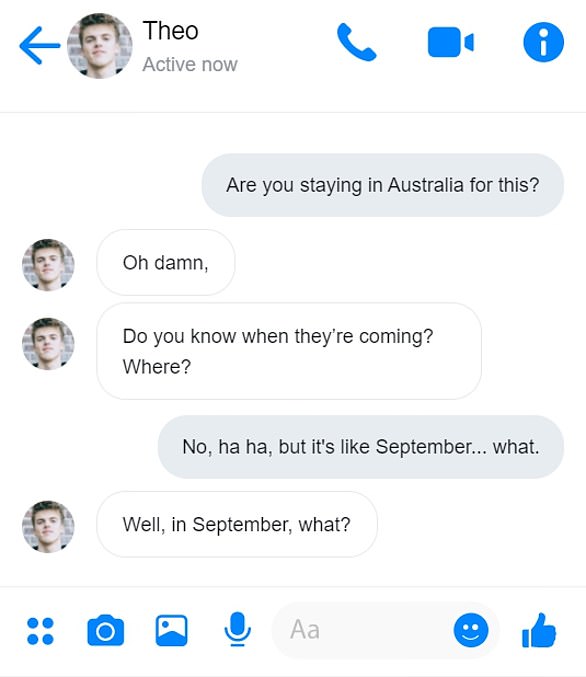 Childhood friend Lou Gymorey testified on day five about messages she exchanged on Facebook Messenger with Theo on the day he disappeared. She had sent him a message alerting him to the fact Irish band U2, one of Theo’s favourite acts, were touring Australia in September

She said the messages now show as having been opened, she thought by the police accessing his Facebook account.

The second witness was Tom Phillips, former manager of the WakeUp! hostel in Byron Bay where Theo stayed.

He admitted that in hindsight, Theo’s absence from the hostel should have been brought to the notice of police earlier.

Theo checked in May 29 and was due to check out in June 3, but the alarm was only raised in June 6 after his passport was fond with his belongings in his room.

Evidence was led that the hostel called Theo’s phone three times and emailed his Hotmail account between June 3 and 6 to find out when he was checking out, before alerting police.

‘In hindsight it would have been great to have done it [earlier],’ Mr Phillips said.