Rugby fans visiting Japan for the World Cup are in for a treat if they use the country’s bullet trains to reach the stadiums.

The fleet contains some of the most advanced high-speed trains in the world, with jaw-dropping top speeds and unmatched punctuality.

Here we map out the network, pick out which types of bullet train – or ‘Shinkansen’ – serve which World Cup stadiums, reveal their top speeds and much more…

Rugby fans visiting Japan for the World Cup are in for a treat if they use the country’s bullet trains to reach the stadiums. This map shows which trains serve which lines and where the Rugby World Cup stadiums are in relation to them. Note that some lines share the same track. The map shows the locations of the stadiums and not the precise stadium name 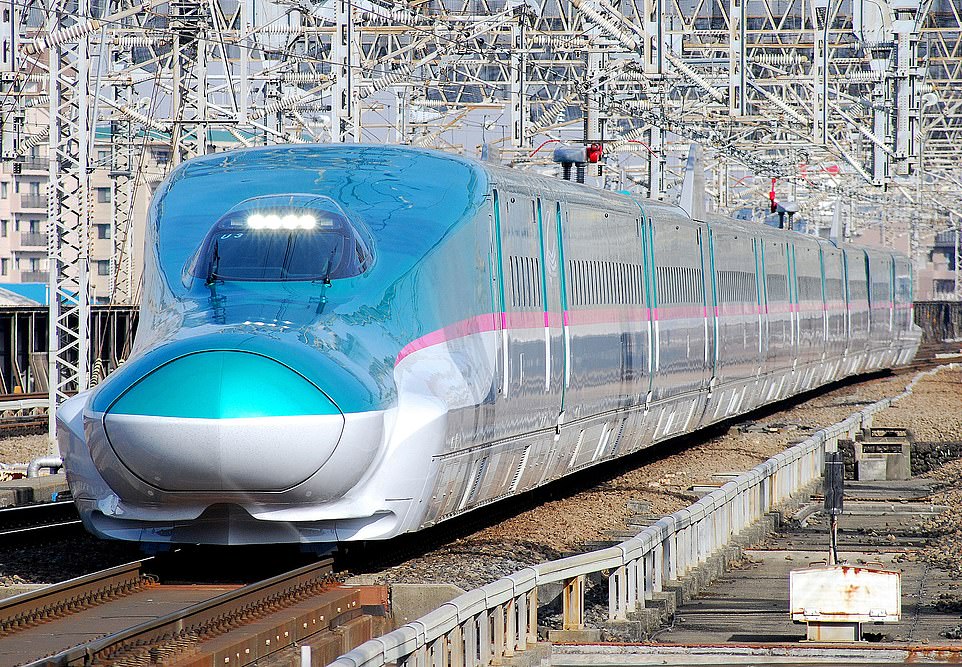 The H5 bullet train (pictured) is the joint fastest on the network, with a maximum operating speed of 199mph

If you want to see the landscape in Japan rushing past at maximum speed, then hop on the Hokkaido or Tohoku Lines, because the H5 and E5 bullet trains operating on them are the joint fastest on the network.

They reach speeds of up to 199mph on the Tohoku Line. (Click here to see one passing at speed through a station.)

The two lines share the same track until Shin-Aomori at the top of the mainland, then the Hokkaido Line services carry on and zip through one of the world’s longest undersea tunnels, the Seikan Tunnel, which runs for 53.85km (33.4 miles) – that’s 3.4km longer than the Channel Tunnel.

The Hokkaido Line will connect directly with Hokkaido’s capital, Sapporo, by 2030.

East Japan Railway is currently testing the newest Shinkansen, the Alfa-X, which it hopes to operate on the new line at speeds of up to 224mph/360kph, which would be the fastest train in service in Japan. 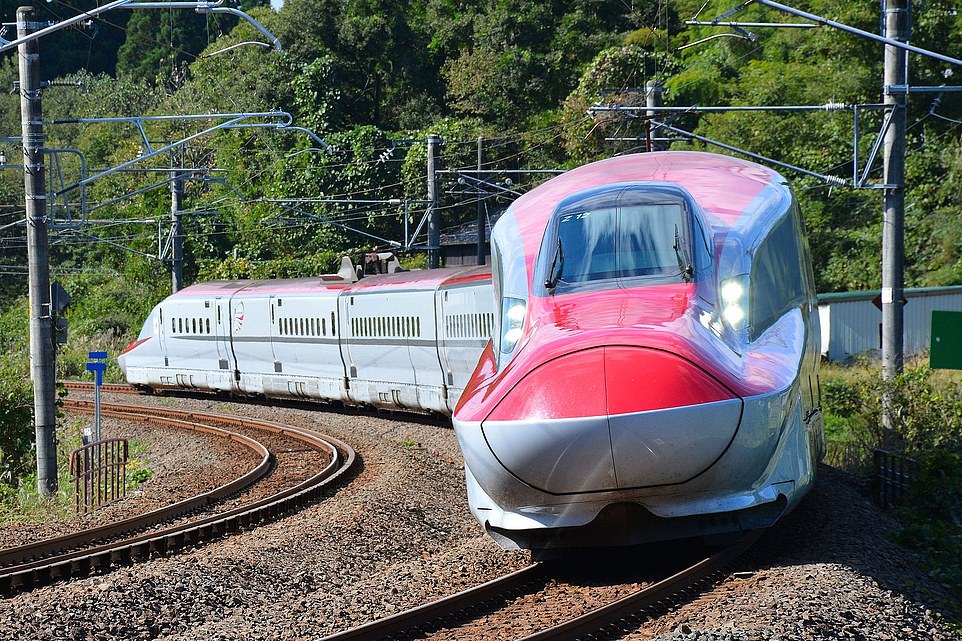 The E6 Series runs to Akita, which is a mini-shinkansen line with a top speed of just 80mph. Though the train travels at 199mph before it branches off

The Akita Line is a spur known as a ‘mini-shinkansen’ – a bullet train branch line – that runs off the Tohoku Line and is operated by the blindingly quick E6 Series.

However, once it branches off west to Akita the maximum line speed drops from 199mph to 80mph. 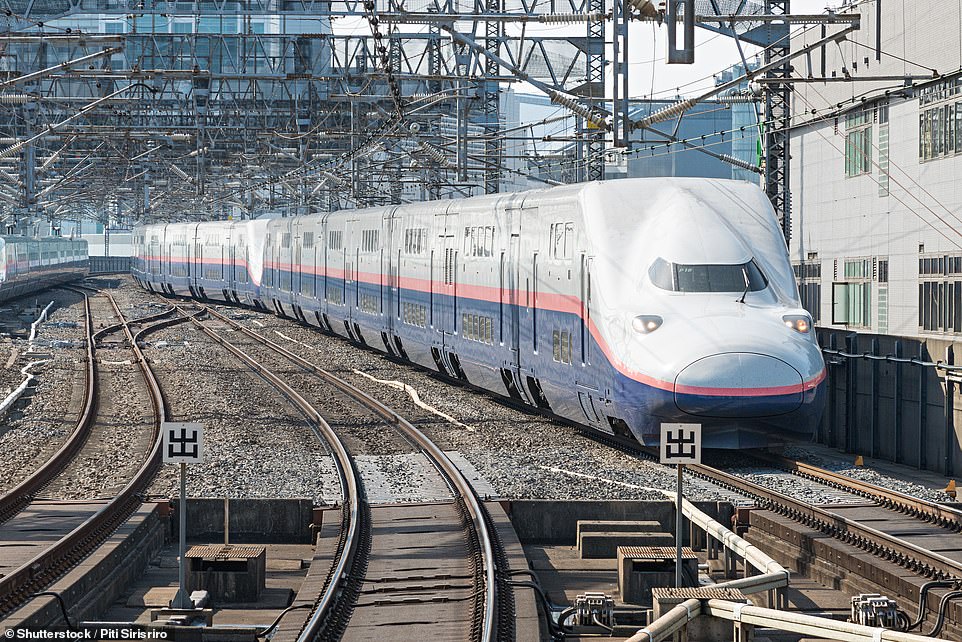 The E7 and E4 Series bullet trains are no slouches, but are the slowest in the fleet with maximum service speeds of 160mph and 150mph respectively.

However, the E4 Series is unique in the Japanese fleet because it’s a double-decker.

It operates as an eight-car set that can be joined together to provide a one-train capacity of 1,634 seated passengers. 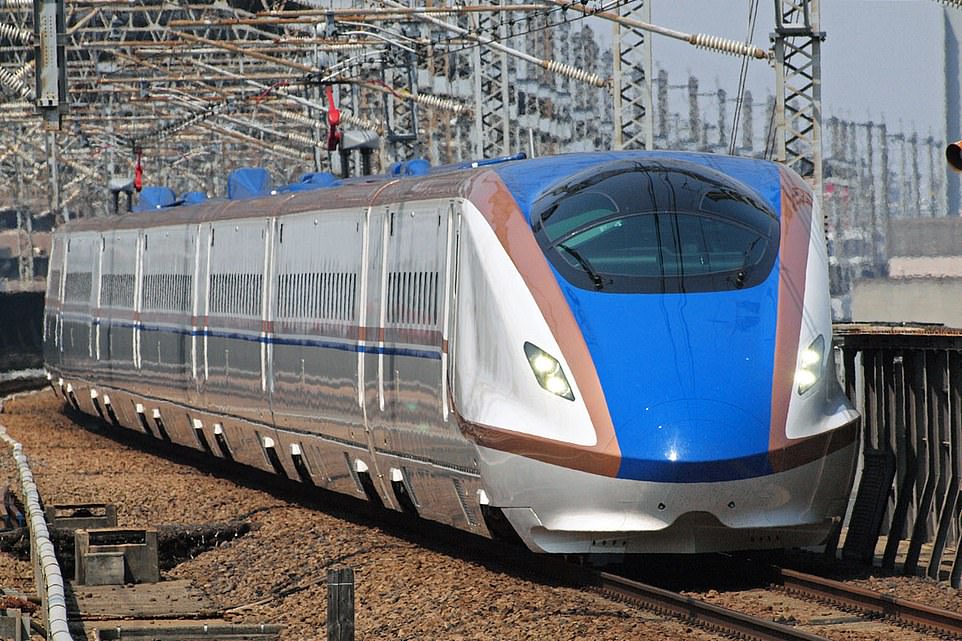 The E7 Series is a relative bullet train slow-coach, with a top operating speed of ‘only’ 161mph

The E7 Series also serves the Hokuriku Line, which ends in Kanazawa, but will continue to Tsuruga by 2022.

The Line opened in 1997 just in time for the Winter Olympics in Nagano, one of the stops along the way. 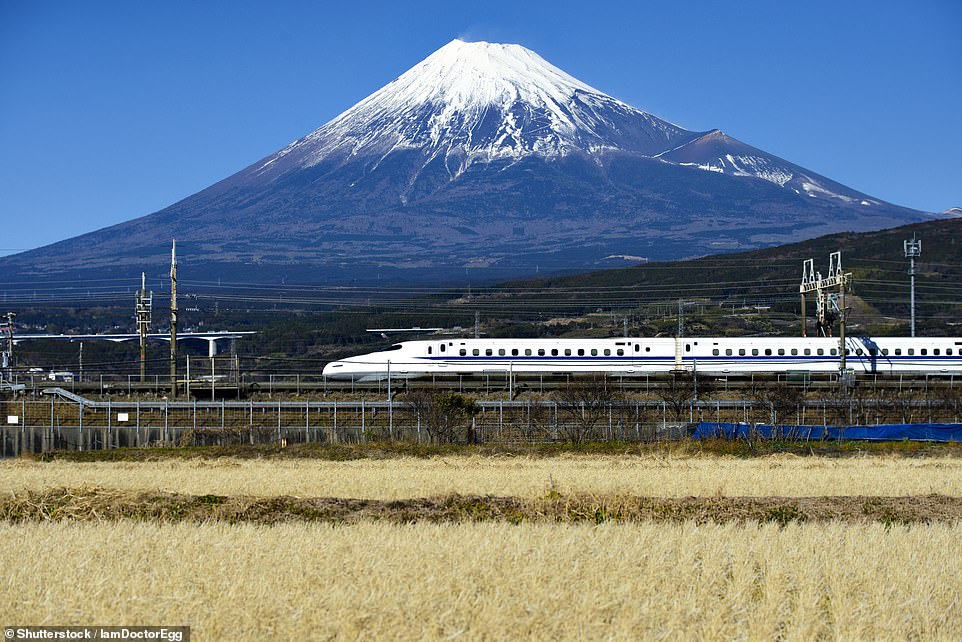 An N700A bullet train passes in front of the mighty Mt Fuji, which comes into view 44 minutes after departure from Tokyo

The trains on these two lines are among the most-photographed in Japan – because they pass Mount Fuji as they hurtle westwards.

For views of the 12,400ft volcano, which is around 62 miles from Tokyo, sit on the right-hand side travelling westwards, and obviously the left-hand side coming back. It’ll come into view 44 minutes after leaving Tokyo.

The ‘A’ in the series name stands for ‘advanced’.

Both the N700 and N700A have a one-degree tilt capability, which permits greater speed around curves. But the N700A can accelerate faster.

However many of the older sets have now been retrofitted with ‘A’-grade technology. 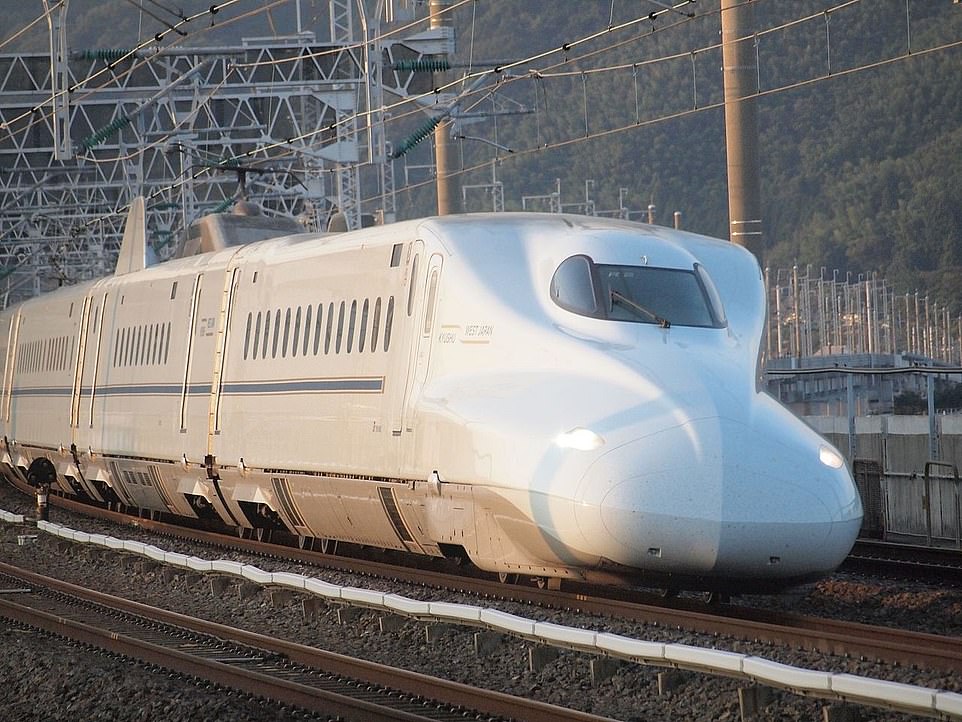 A Sanyo Line N700-7000 whizzes along. These are operated by the West Japan Railway Co and go to Kyushu island

The N700 plies its trade all the way to the island of Kyushu via the Sanyo and Kyushu lines.

The Sanyo Line, which ends at Hakata station in Fukuoka on the island, was the second to be built and opened in 1975.

The N700-8000 Series bullet train is run by the Kyushu Railway Company to Kagoshima-Chūō – the southern terminus on the Kyushu Line and for now the southernmost stop on the network – and has the same external livery as the N700-7000. The line is currently being extended to Nagasaki, with services due to start running in 2022. 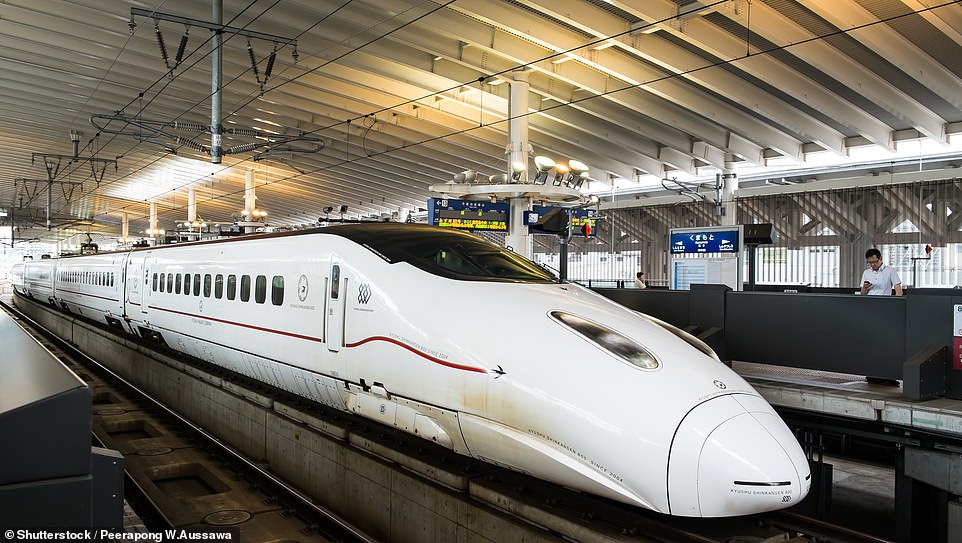 The 800 Series spends a lot of its time in tunnels on the Kyushu Line – but it has a homely interior, with wooden seats and floors

Its maximum operating speed is 161mph, but it’s designed to reach 177mph.

Large portions of the Kyushu Line are in tunnels, so the designers of the Series 800 made the interior as pleasant as possible, with wooden seats and floors for a more homely vibe. 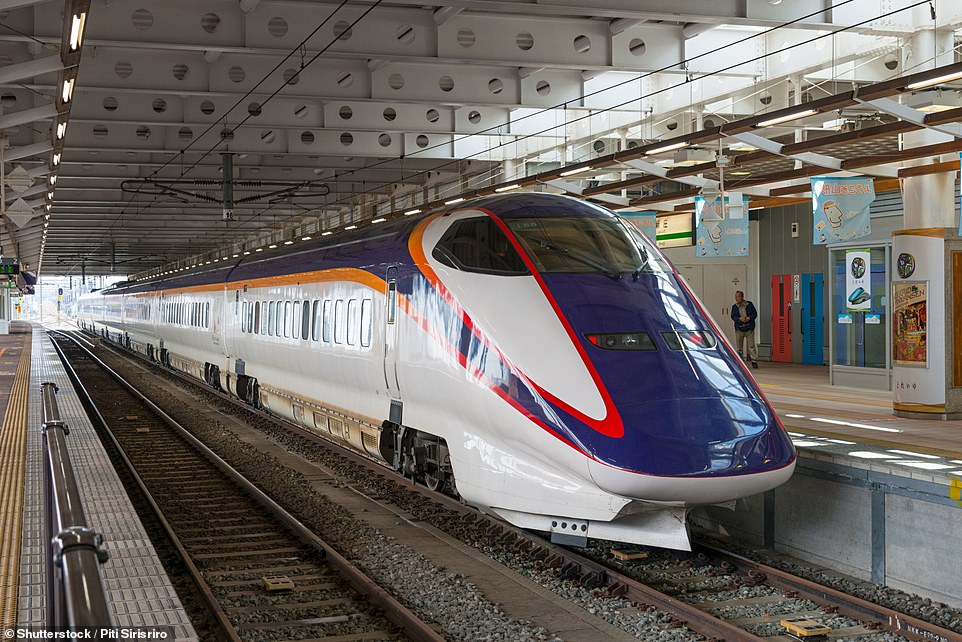 This is another mini-shinkansen line, like the Akita Line, and is operated by the slightly narrower E3 Series.

These can hit 171mph, but once they branch off on the line to terminus station Shinjo, the limit is 80mph.

The first bullet train, built by Hitachi, began operating on October 1, 1964, between Tokyo and Osaka.

If bullet trains are more than one minute behind schedule they are considered officially ‘late’.

If bullet trains are more than five minutes behind schedule, the company operating them must explain themselves to the government. 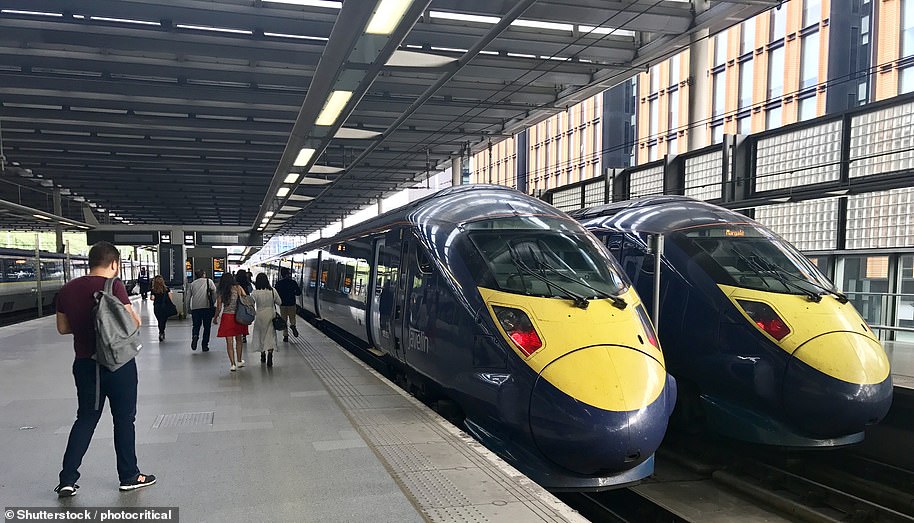 Hitachi, which has been building bullet trains since the 1960s, brought bullet train technology to the UK. In 2009 it introduced the country’s fastest domestic train – the Javelin (pictured at St Pancras) – which runs at 140mph

The average bullet train delay is around 30 seconds.

The bullet train network passenger fatality record – in 55 years of operation – is zero.

Hitachi, which has been building bullet trains since the 1960s, brought bullet train technology to the UK. In 2009 it introduced the country’s fastest domestic train – the Javelin – which runs at 140mph between London St Pancras International and Kent. Hitachi Rail is currently bidding with Bombardier for the contract to build the new fleet of trains for the UK’s High Speed 2 line.

Bullet trains aren’t just quiet for passengers on the inside – they’re quiet when they speed past for people on the outside too. They never exceed 75 decibels while running. For comparison, a passenger car travelling at 65mph, 25 feet away makes 77 dB of noise.

East Japan Railway is currently testing the newest Shinkansen, the Alfa-X, which it hopes to operate on the new line at speeds of up to 224mph/360kph, which would be the fastest train in service in Japan. 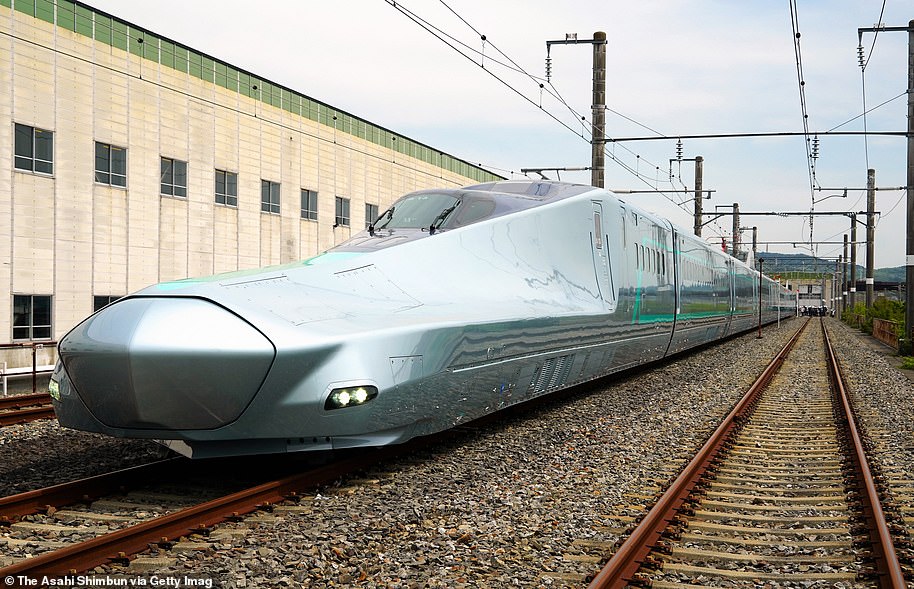 Shinkansen carriages are 0.3metres wider than high-speed trains in Europe.

The latest bullet trains use about half the electricity that a Eurostar uses.

The network is wired up to earthquake sensors. If a tremor is detected, the bullet trains stop automatically.

The summit of Mt Fuji has been considered sacred since ancient times and bullet train staff have been known to bow to it as the train passes.

Thank you to Hitachi and Koji Agatsuma, Hitachi Rail’s Engineering Director, for their help in producing this feature.

For more information on the Rugby World Cup visit www.rugbyworldcup.com.