Everything you need to know about the coronavirus app

From privacy concerns to battery issues, Australia’s coronavirus app isn’t without its faults.

The government wants 40 per cent of Australians to download its COVIDSafe program even though privacy safeguards are yet to be passed into law.

Two million people had downloaded the app 24 hours after it was unveiled on Sunday, even though legislation banning police from accessing the data won’t be presented to Parliament for another two weeks.

The government wants 40 per cent of Australians to download its COVIDSafe program even though privacy safeguards are yet to be passed into law. Pictured are Sydney grocery shoppers 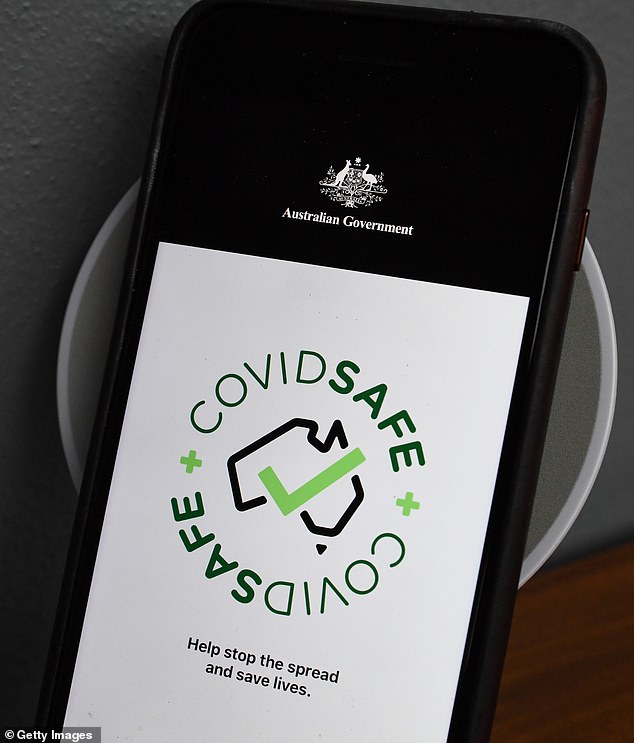 From privacy concerns to battery issues, Australia’s coronavirus app isn’t without its faults

At this rate, the government would achieve its goal of 10million users in just five days.

Like the Singapore government’s TraceTogether program it is based on, COVIDSafe uses Bluetooth technology to determine if someone has come into close contact with a coronavirus case.

The new CovidSafe app which uses bluetooth technology to trace coronavirus contacts with encrypted data has far less invasive permission setting requests than Facebook, which most people have on their phones.

*  Record audio with the microphone and change your audio settings

* Connect and disconnect from Wi-Fi and view Wi-Fi connections

* Prevent your phone from sleeping

* Receive data from the internet

Prime Minister Scott Morrison and Australia’s Chief Medical Officer Brendan Murphy have promised it will be a major tool to unwind COVID-19 restrictions in coming weeks – and stop a potential future outbreak.

Australians would be more likely to be allowed to leave home for purposes other than buying groceries and medicine, or travelling to work, should close to half the population download it.

Individual app users receive notifications, urging them to get tested, if it detects they have been within 1.5 metres of a disease carrier for more than 15 minutes.

It also saves health officials from having to ask a coronavirus sufferer to list every person they remember coming into contact with, before a public servant then phones each person individually.

The Australian Council for Civil Liberties, unusually for them, favours the app, provided police are barred from accessing the data, as the government has promised.

‘It does have the potential to aid significantly in controlling this pandemic – we support it but only with significant privacy protections.’

COVIDSafe data is meant to be deleted after 21 days and destroyed once the COVID-19 pandemic is over.

Australians who sign on to the app receive a screen message promising their privacy will be protected.

‘These provisions will be enshrined in legislation when parliament returns in May.’

Parliament, however, isn’t sitting against until May 12, which means COVIDSafe users will be using the app without any legislated privacy protections in place for at least two weeks.

Health Minister Greg Hunt announced an app determination on Anzac Day – a day before telling a media conference the app would use encrypted data and only be available to health officials.

Instead, a sub-section of this ministerial directive said an official was entitled to collect the data if it was to prosecute someone for breaching the Biosecurity Act of 2015. 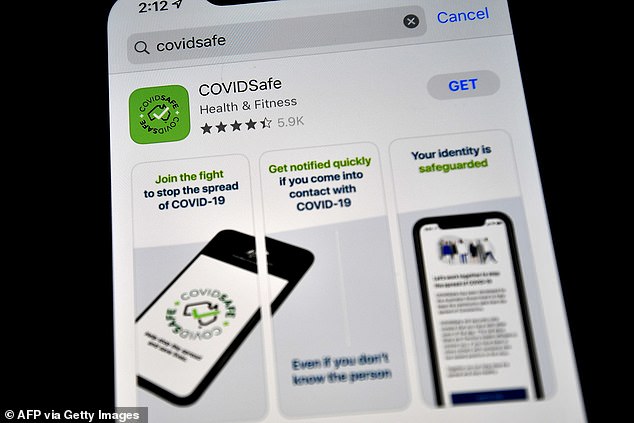 Parliament, however, isn’t sitting against until May 12, which means COVIDSafe users will be using the app without any legislated privacy protections in place for at least two weeks 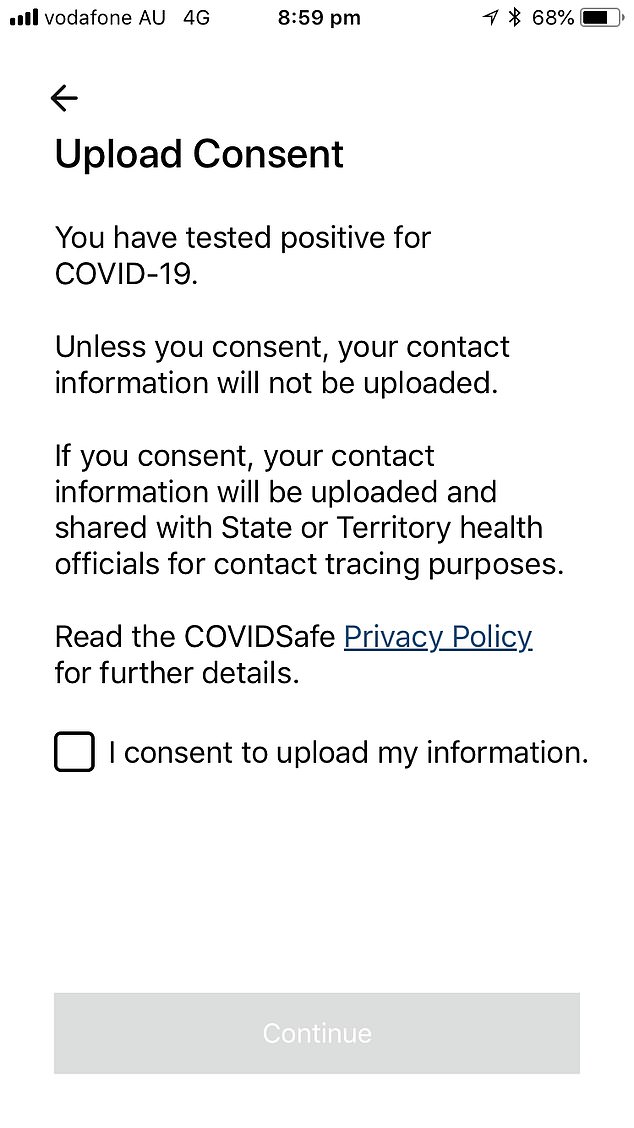 Individual app users receive notifications, urging them to get tested, if it detects they have been within 1.5 metres of a disease carrier for more than 15 minutes

Attorney-General Christian Porter last week promised there would be legislation banning police and law enforcing agencies from accessing the app, addressing a key concern of the Australian Council for Civil Liberties.

His spokesman on Monday, however, conceded the health minister and not him was more likely to bring forward new legislation when Parliament returned from May 12 to 14.

Labor’s health spokesman Chris Bowen is reserving judgement until he sees the legislation, his spokeswoman said. 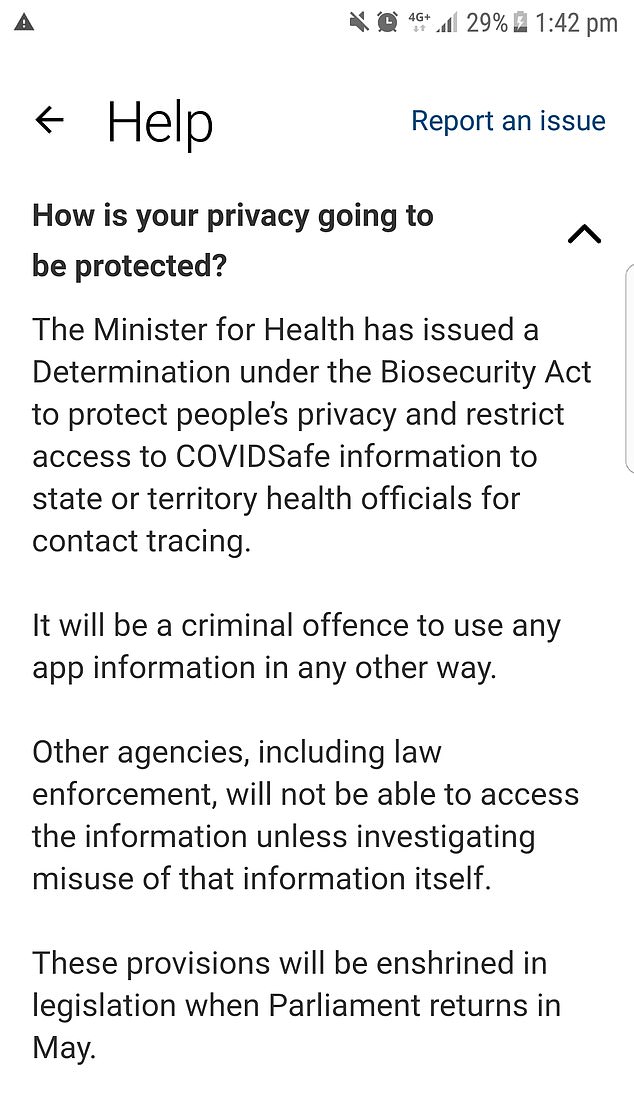 Australians who sign on to the app receive a screen message promising their privacy will be protected. Pictured is a sign-in message

One Nation leader Pauline Hanson has declared she won’t be either for the same reason.

‘I am not prepared to download the app. I don’t want to,’ she told Sky News on Monday.

Like any Bluetooth app, COVIDSafe could also use a lot of battery power, a key concern during natural disasters with Australia’s far north near the end of its cyclone season.

Australians who use music download apps like Spotify would be familiar with how one program on their phone can drain a lot of battery power – a major issue during blackouts.

Apple iPhone users could compromise the app’s tracing ability if they put it in low power mode in a bid to save battery.

Android phones owners are prompted to disable ‘battery optimisation’, as the app needs devices to be running at full capacity.

The flaws mean a user cannot try and save battery, even if you’re running low. 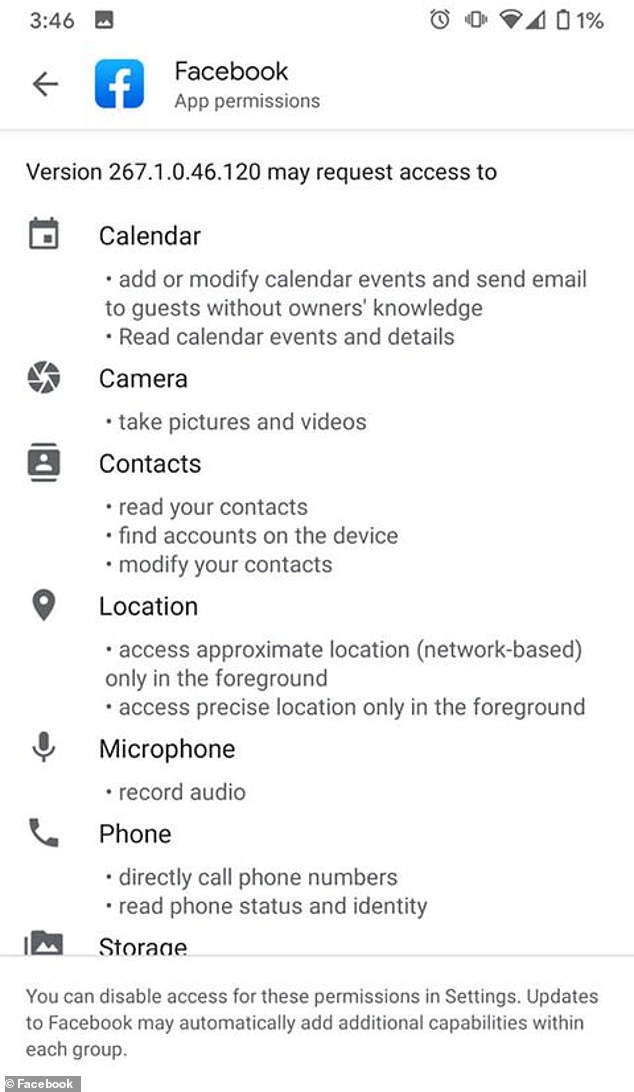 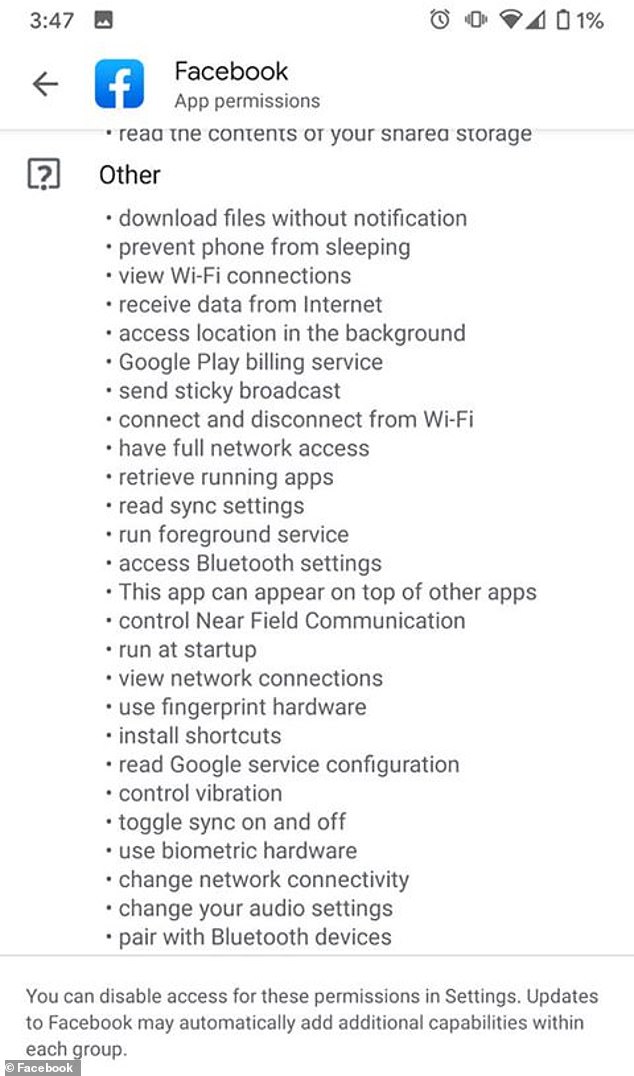 Facebook app settings (pictured) are extensive, invasive, can be changed without you knowing 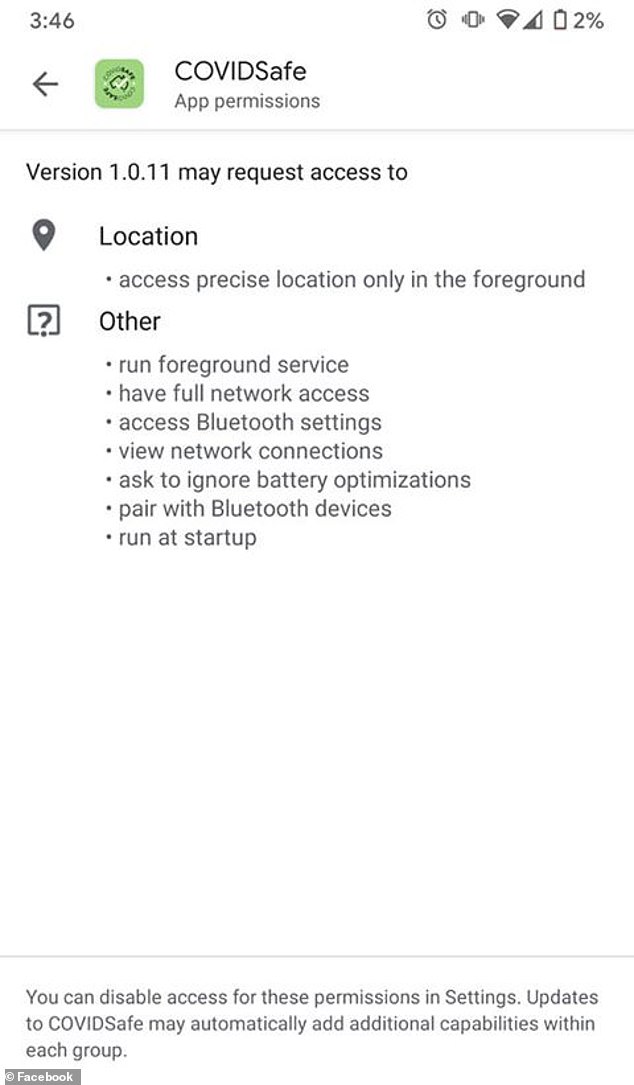 CovidSafe has relatively few settings, is not invasive and is not changed without your knowledge – unlike Facebook