The attacks have usually come at night. Many victims say they never noticed anything amiss. Others insist they have definitely felt or heard something — either vibrations or any number of odd sounds including a loud ringing, a scraping noise and a high-pitched chirping like the noise made by crickets or cicadas. Several said the noises came in minute-long bursts.

One diplomat described being jolted awake in a Havana hotel room by a grinding, blaring cacophony. When he moved a few feet across the room, the noise stopped. When he got back into bed, the agonising sound hit him again — as if, he told doctors, he had walked through some invisible wall cutting straight down the middle of his room.

Whether they heard anything or not, the consequences have been unmistakable — symptoms ranging from nose bleeds, nausea, dizziness and severe headaches to mild brain damage and permanent hearing or memory loss. Oddly, as soon as some of the victims left Cuba, they stopped hearing noises.

One diplomat described being jolted awake in a Havana hotel room by a grinding, blaring cacophony. When he moved a few feet across the room, the noise stopped (stock photo)

Or maybe it wasn’t so odd, given the astonishing explanation that has surfaced as to why at least 21 U.S. diplomats, as well as others from Canada, have been brought low while serving in Communist Havana. Although America hasn’t pointed any finger at the likely culprit, Washington believes they were victims of a secret sonic weapon.

Frankly, it’s difficult to think of a more bizarre case of Cold War-style skulduggery since Bulgarian dissident Georgi Markov was assassinated in a London street with a poison-tipped umbrella in 1978.

While no one has lost their life, the effects have been dramatic. Months later, some of the victims are still struggling to concentrate or even recall common words — evidence of long-term mental damage that has hardened the U.S. attitude against Cuba.

Now, the repercussions are being felt in diplomatic shockwaves powering across the Caribbean sea in the direction of the Communist state.

The scandal threatens to derail the historic resumption — after a 50-year hiatus — of relations between the two old foes when their respective embassies reopened in 2015.

At the weekend, the U.S. Secretary of State, Rex Tillerson, revealed the Trump administration was taking the controversy so seriously that it was considering closing its embassy in Havana. Some U.S. senators have gone further, demanding that the government also kicks out every Cuban diplomat in America (the U.S. expelled two in May as a protest over the scandal).

Meanwhile, other countries have become concerned, and now France has tested its own Havana staff for potential sonic injuries.

The controversy certainly helped sour President Trump’s speech to the UN General Assembly, in which he accused Cuba of delivering only ‘anguish and failure’ to its people. How long before he’s ranting about ‘totally destroying’ Cuba as he did about North Korea this week?

The trouble for the Americans is that — like a plot from a sci-fi film when an alien weapon completely outfoxes humanity — scientists, doctors and intelligence experts remain utterly baffled.

So far, investigations involving the FBI, CIA, U.S. State Department and even the Canadian Mounties have found nothing.

‘None of this has a reasonable explanation,’ says Fulton Armstrong, an ex-CIA official who served in Havana before it reopened its embassy there. ‘It’s just mystery after mystery after mystery.’ U.S. officials say the episodes were first reported last November, while the latest incident emerged as recently as late last month.

Most diplomats were affected in their homes — which were provided by the Cuban government. But at least one incident occurred on an upper floor of the Hotel Capri, a historic high-rise building popular with tourists, where two diplomats were living.

Nobody else at the hotel made a similar complaint. The targeting, if indeed a weapon is involved, is so specific that it affected only certain parts of certain rooms.

Colleagues of the diplomat in the Hotel Capri experienced a similar effect — waking with a ringing in their ears and reaching mistakenly for their alarm clocks, then getting up, only to discover the ringing stopped when they moved away from their beds. 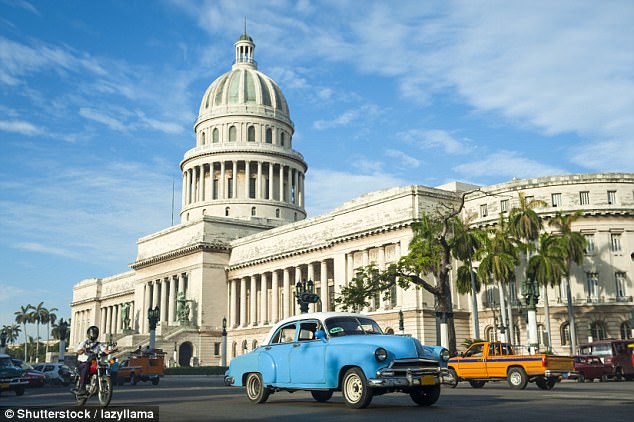 At the weekend, the U.S. Secretary of State, Rex Tillerson, revealed the Trump administration was taking the controversy so seriously that it was considering closing its embassy in Havana (stock photo)

Two officials said the sonic attacks made a ‘deafeningly loud sound similar to the buzzing created by insects or metal scraping across the floor’. Sending out the sort of targeted, localised beam of sound that could hit someone as they sleep is possible, but fiendishly tricky.

The fact that many of the victims never heard anything indicates the sound was outside the human hearing range.

If so, it would have to be emitting either a very high frequency — called ultrasound — or a very low one, infrasound.

Of those, experts say the most likely is ultrasound — which is employed, for example, in dog whistles — because it’s far simpler to channel into a tight beam of energy. It has also been proved to produce some of the symptoms — such as hearing loss and disorientation — reported by the diplomats. It can even be fatal.

Ultrasound waves are usually generated by an electrically charged crystal that converts electrical energy into sound waves. And Tim Leighton, professor of ultrasonics at Southampton University, estimates the sonic attackers would need a transmitter the size of a car to generate hearing loss from 50 yards away.

If a sonic weapon is scientifically possible, then who might have been using it?

President Raul Castro — the late Fidel’s brother — has reportedly given his personal assurance to the U.S. Charge d’Affaires in Havana that his government was not behind the attacks.

The government — which many believe genuinely wants to improve relations with America — says it launched an ‘exhaustive, high-priority, urgent investigation’ . . . which, like the others, appears to have drawn a complete blank.

U.S. investigators have reportedly examined at least two other possibilities. The first is that the perpetrator could be some rogue Cuban government faction, or even Cuban intelligence, which may fear it will lose its influence if the country is not at daggers drawn with America.

The alternative is that it’s the Russians, who still hold great sway over Cuba, its long-time Cold War ally. Cuba’s secret service, the Intelligence Directorate, has close ties with the FSB, Russia’s successor to the KGB. It’s possible Russia carried out the sonic attacks to ruin relations between the U.S. and Cuba.

Russia certainly has form. At the height of the Cold War, beams of microwaves were aimed at the U.S. embassy in Moscow, and America has never revealed what the effects were on its staff.

Vince Houghton, an intelligence expert, says of the injuries sustained this year that the Cubans or even the Russians could have been carrying out an intelligence operation that went wrong. Alternatively, he says, it could be part of a campaign of intimidation.

‘It could be new technology that has had a side-effect that no one expected,’ he says.

‘On the other hand, it could have been designed to harass and make people feel uncomfortable.’

Sceptics cling to ‘simpler’ explanations, such as lead and mercury poisoning, or a mass outbreak of measles — all of which can damage hearing. But these don’t even begin to account for those weird screeching sounds in the night.

For now, the fog shows no sign of lifting. But given the CIA famously tried out booby-trapped cigars, poisoned wetsuits and exploding seashells as ways of killing Uncle Fidel, is it really that far-fetched that the Cubans might have blasted back with a sonic weapon against Uncle Sam?