Three brothers subjected to years of beatings at the hands of their evil mother have spoken out to reveal the extent of her abuse.

Anne Brown, 63, regularly beat Michael Keane, 30, and his brothers Connor, 22, and Blair, 20, all over their bodies with a belt she kept in her handbag.

Brown also held their ‘heads under water’ and ‘pushed pillows onto their faces’ to restrict their breathing.

Michael – the eldest of the boys – only found the courage to share his horrific upbringing when he met his wife Jennifer, 30, in 2010.

Abuse victim Michael Keane, 30, from Cumbernauld, Scotland has spoken out about his mother’s crimes 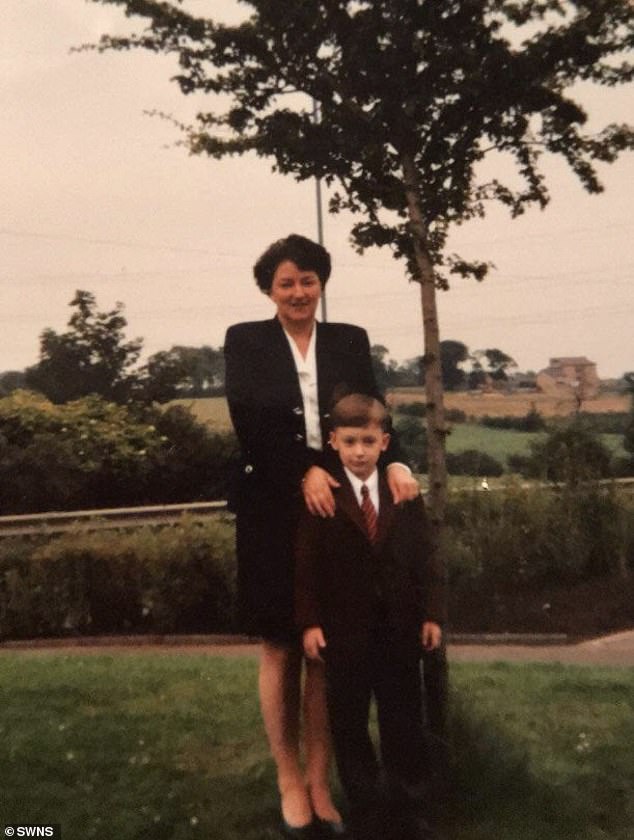 Michael with his mother Anne Brown, in Cumbernauld, on his first day of school when he was five

After confiding in her, Michael – and Blair – finally reported their mother to the police.

Brown was found guilty of assault against each of her sons between May 1994 and October 2010.

She was sentenced to five years in jail at Airdrie Sheriff Court, Lanarkshire, earlier this year.

Dad-of-three Michael has vowed to give them the loving upbringing he said he was denied, knowing Brown is behind bars.

Michael from Cumbernauld, Lanarkshire, said: ‘There is no other way to describe my mother than pure evil.

‘She raised us to live in fear and on every day that we were in her care, pain and terror was inflicted upon us. 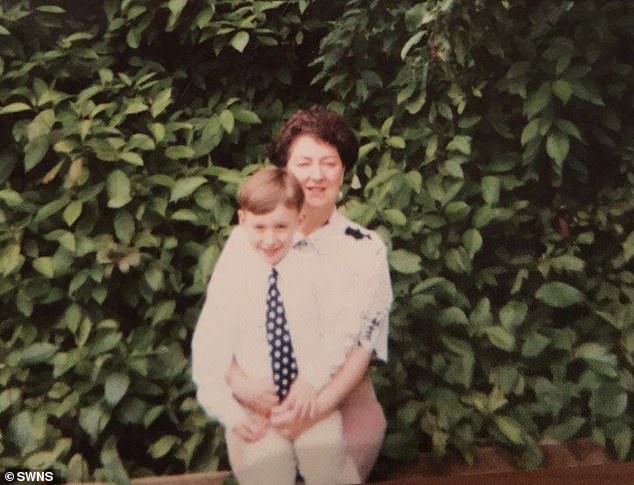 Michael with his mother Anne Brown when he was ten. He only found the courage to share his horrific upbringing when he met his wife Jennifer in 2010

‘It’s drastically impacted how I’ve raised my own children, and will be something that lives with me forever.’

From the age of four, Michael was subjected to extreme child abuse from his mother, who was ‘big on physical punishment’.

Mum-of-three Brown would carry a leather belt in her handbag, alongside her lipstick and house keys, so that wherever they went she could punish her sons, they claimed.

‘We were petrified all of the time,’ Michael said.

‘She could snap at the smallest of things which meant we were constantly on edge.

‘I was so scared of doing something wrong that my nerves caused me to knock over a glass of water while we were out for dinner at a restaurant once.

‘That was enough for her to drag me out of sight of the other customers, and belt me viciously across the back.

‘She would always use the metal buckle end to administer her beatings, but the abuse would increase even more when we were at home and away from prying eyes.

‘She’d use the belt buckle on the backs of my knees, or worse, my genitals and buttocks, if I ‘stepped out of line’ while at home.

‘It could be for the smallest of things, mostly because she ‘didn’t like my tone’.

‘It made it impossible to know when she was going to flip – we were constantly on edge.’ 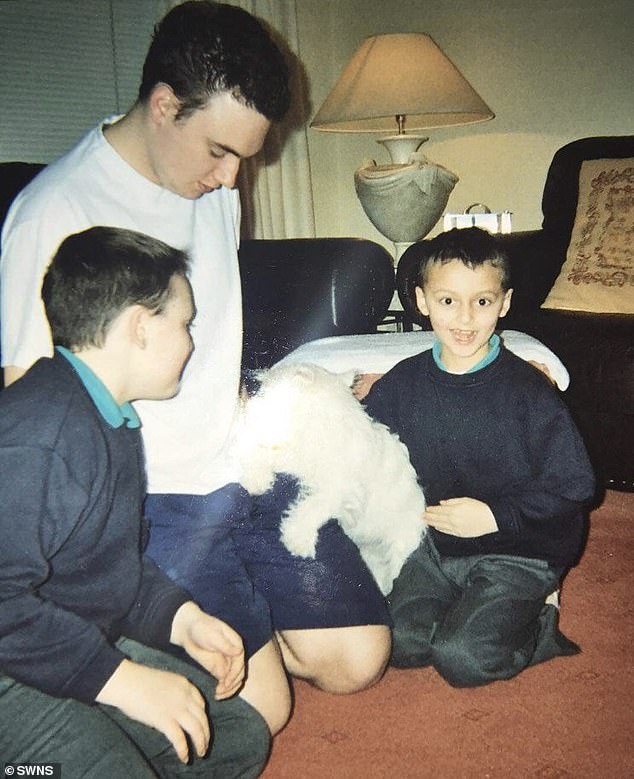 Michael at 16 with his younger brothers, Connor and Blair. All three boys were subjected to her abuse

Michael claims the child abuse was mainly confined to Monday, Tuesday and Wednesday’s when the boy’s father, Michael Snr, 56, was working away as a display rep.

On those days, Brown’s true colours would show, leaving the boys praying for the return of their dad so the violence would calm down for a day or two.

Michael’s only respite was when he was in the care of his two aunts Marion and Lily.

Brown would allow them to take care of the boys when it suited her, and soon a maternal bond was formed between them as they gave Michael the love he had never received from his mother.

‘My aunts were such a vital part in my upbringing, and I don’t think I’d be here if it wasn’t for them,’ Michael said.

As Michael grew up he says Brown also began to use her fists and drag him about by his hair, often pulling out large chunks in her aggression.

‘She might have been a small 5ft 5ins, but she would throw us about with ease and land punches without any trouble at all,’ Michael said.

‘It wasn’t long before I was bigger than her, but I was so terrified I wouldn’t dare try to fight back – she had us right where she wanted us.’

In 2005, Brown told Michael that she was separating from their father – the news he hoped he would never hear.

Michael added: ‘I tried to stand up for myself and tell her I wouldn’t be living with her after the separation. It was then that she told me should would kill me – and I knew she wasn’t joking.

‘I’d always been scared of her, but it wasn’t until that day that I knew she had the potential to kill us. Looking back now, I should have gone to the police then, but I felt helpless.’

Their cruel mother that moved out, leaving the boys with their father, and the assaults ended when Michael was 17. 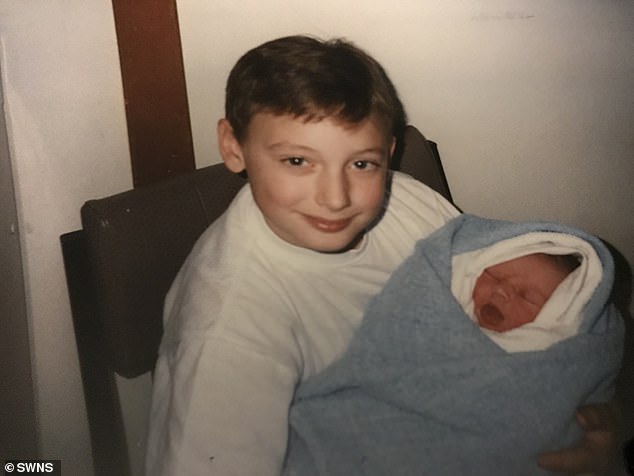 Michael and his brother Blair, when he was born. In 2016, Michael and Blair reported their mother to the police, before standing before the court

The pair married in June 2011, but not before Michael had opened up about what his evil mother had subjected him to as a child.

It was the first time he had ever spoken to anyone about what happened other than Connor or Blair.

In November 2016, Michael and younger brother Blair reported their mother to the police, before standing before the court.

Giving evidence in court, Blair, 20, told jurors he had been abused from the age of six to when he was nine.

Like Michael, he was struck repeatedly on the head and body with the belt buckle, as well as shoes, clothes hangers and toys.

Horrifyingly, Blair detailed how both he and middle brother, Connor, 22, were even held under the bathwater, as well as having pillows pushed against their faces.

‘The rest of our family couldn’t believe it when they found out what mum put us through,’ Michael said. 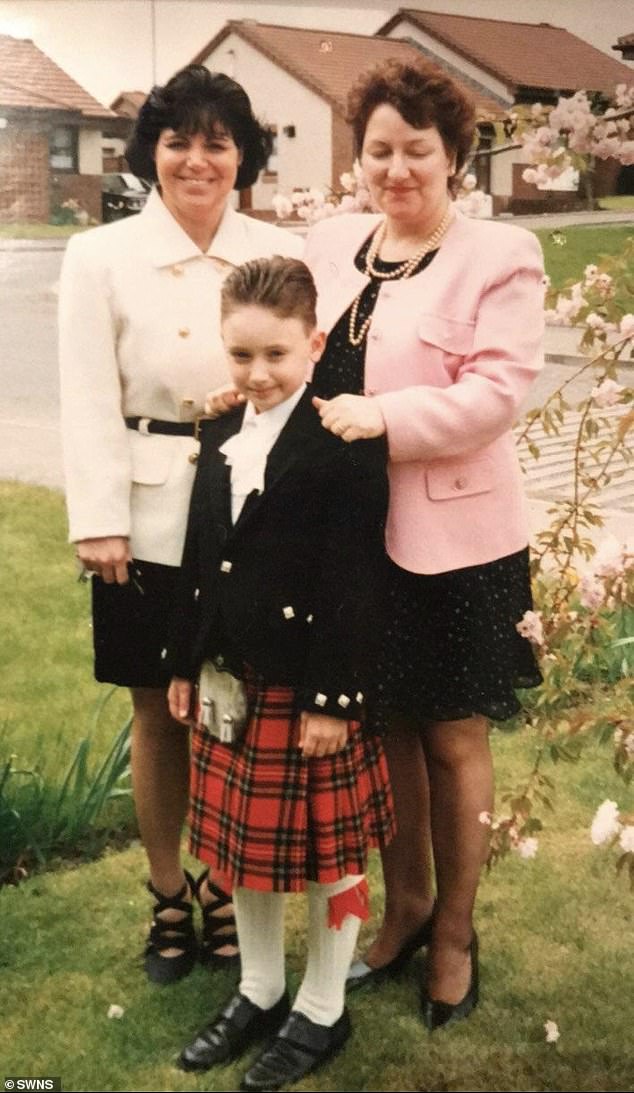 *Michael aged 10, with his mother Anne Brown and her sister in law Elizabeth Keane

‘There were times when Blair thought she would kill him too, the scariest being when she held him under the water.’

Anne Brown was found guilty of three charges of assault – one for each son.

She was sentenced to a five-year custodial sentence for each – which she will serve concurrently – at Airdrie Sheriff Court, Lanarkshire, on February 6.

At sentencing, Sheriff Morag Shankland said: ‘You have been convicted of the most appalling of crimes against your own sons.

‘The abuse persisted for years. The harm you have caused is, to my mind, simply incalculable.’

Michael now has three children of his own but admits it is difficult to trust others around them, and will never let them meet his mother..

‘We will never forget what we went through, but I’ll do my best to make sure I love my children in a way I never was so that at least one positive comes out of our experiences,’ he said. 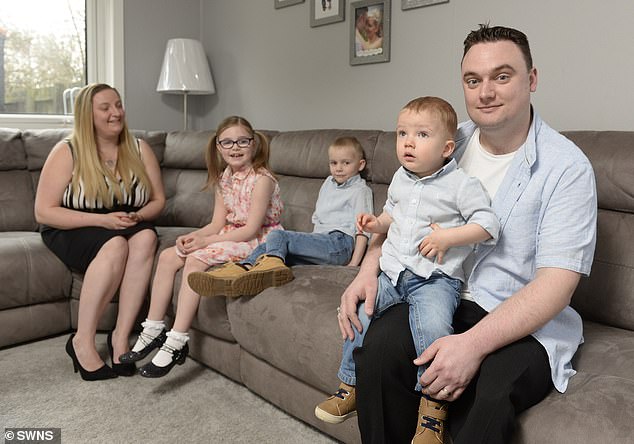 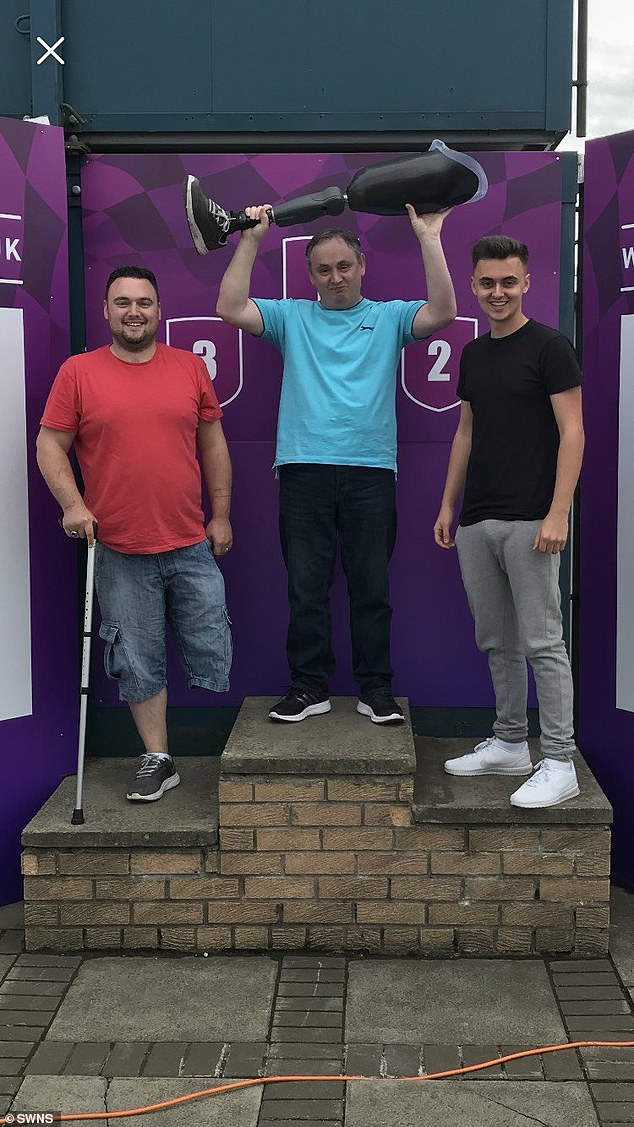 Left to right; Michael, his dad Michael Keane senior, and his brother Blair, in a photo taken in 2018