Sir Philip Green will not be disqualified from serving as a company director following the BHS fiasco, it has been announced.

The Insolvency Service said it intends to ban Dominic Chappell and three other former BHS directors from taking up similar roles at other firms for up to 15 years.

It follows an investigation into the British high street chain’s collapse in 2016, with the loss of around 11,000 jobs and a pension blackhole of £571million. Former BHS owner Sir Philip Green (left) is not set to have disqualification proceedings brought against him, while Dominic Chappell (right) could be banned for 15 years

A spokesman said: ‘We can confirm the Insolvency Service has written to Dominic Chappell and three other former directors of BHS and connected companies informing them that we intend to bring proceedings to have them disqualified from running or controlling companies for periods up to 15 years.

‘We can also confirm that we have written to Sir Philip Green, also a former director of BHS, informing him that we do not currently intend bring disqualification proceedings against him.

‘As this matter may now be tested in the court it is not appropriate to comment further.’

A statement from Sir Philip said: ‘On March 15, the Insolvency Service informed Sir Philip Green that it had concluded its investigation into BHS and confirmed that he will not be the subject of any proceedings under the Company Directors Disqualification Act 1986.

‘Identical confirmations have also been sent to a number of other individuals who were BHS directors in the period prior to its acquisition by Retail Acquisitions Limited.

‘Sir Philip and his fellow directors have cooperated fully with the Insolvency Service since its investigation commenced in May 2016, and welcome this decision.’ 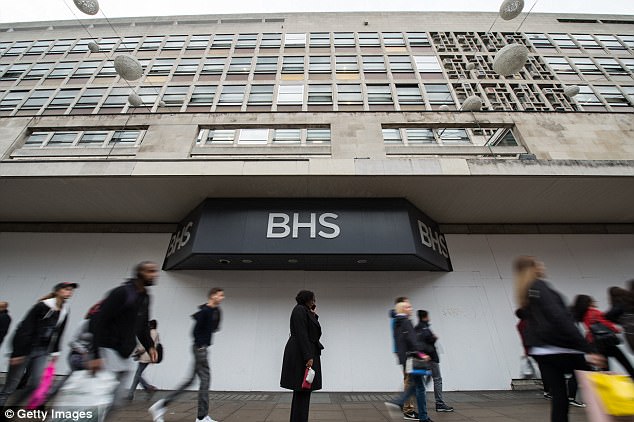 An investigation was launched into the BHS’s collapse in 2016, with the loss of around 11,000 jobs and a pension blackhole of £571million