The former Catalan president will be held in Germany until a decision can be made on whether or not to extradite him to Spain.

Carles Puigdemont was detained in Germany on Sunday after he crossed the border from Denmark on his way back to Belgium.

He is facing rebellion charges over the region’s campaign for independence and was detained under a European warrant.

A court in Germany today said it would likely take several days to decide whether to extradite him.

It is understood he appeared in front of a judge behind closed doors to confirm his identity.

Germany has 60 days to decide whether to return him and he will remain in custody pending a decision.

Meanwhile, protests broke out across the Spanish region of Catalonia after his detention.

At least 89 people are believed to have been injured following brutal clashes between the police and protestors.

It is understood four people were arrested.

A sister protest erupted in the northern city of Girona, where Puigdemont was mayor before he became regional president in 2016.

Mr Puigdemont went on the run almost five months ago after Spanish prosecutors sought to charge him with sedition and rebellion in the wake of a vote by the Catalan parliament to declare independence. 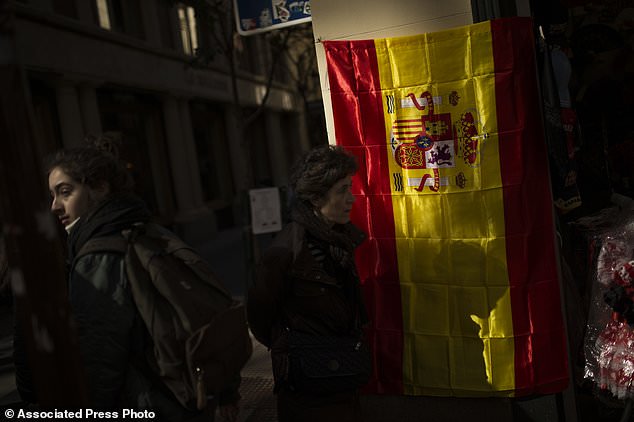 People walk past a Spanish flag displayed in a souvenir shop in Madrid, Monday, March 26, 2018. Carles Puigdemont, fugitive ex-leader of Catalonia and ardent separatist, was arrested Sunday by German police on an international warrant as he tried to enter the country from Denmark. (AP Photo/Francisco Seco)

Spain has been gripped by its most severe political crisis in four decades since Puigdemont’s Barcelona-based government disobeyed a court ban and held a referendum on independence for the northeastern region in October.

That prompted the Spanish government to strip away Catalonia’s large degree of self-government and impose direct rule from Madrid.

Independence has long been a divisive issue in Spain’s most prosperous region.

But seldom has the tension between Spanish and Catalan authorities built to such a fever pitch, with dozens injured in clashes with police in Catalonia following Puigdemont’s capture.

His capture, facilitated by Spanish intelligence services, came as he entered Germany from Denmark by car.

He had been visiting Finland and was returning to Brussels, where he has been living for the past four months to avoid arrest in Spain. 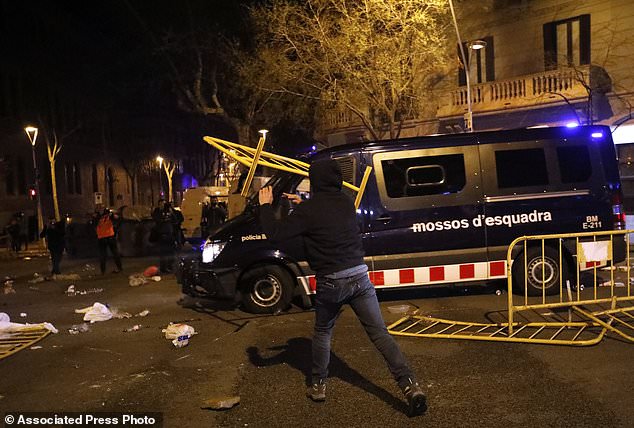 A man throws a metal barrier at a van of the Catalan Mossos d’Esquadra regional police blocking the way of pro-independence supporters trying to reach the Spanish government office in Barcelona, Spain, Sunday, March 25, 2018. Grassroots groups both for and against Catalan secession called for protests Sunday in Barcelona after Carles Puigdemont, the fugitive ex-leader of Catalonia and ardent separatist, was arrested Sunday by German police on an international warrant. (AP Photo/Emilio_Morenatti

Spain wants Puigdemont to answer for his efforts to bring about Catalonia’s independence.

Spain’s Constitution says the country is ‘indivisible,’ and Puigdemont could stand trial on charges of rebellion, which carries a maximum sentence of 30 years.

There are very limited grounds for extradition to be refused, and European Union countries cooperate closely on criminal issues.

Spain has also issued five warrants for other Catalan separatists who fled the country. 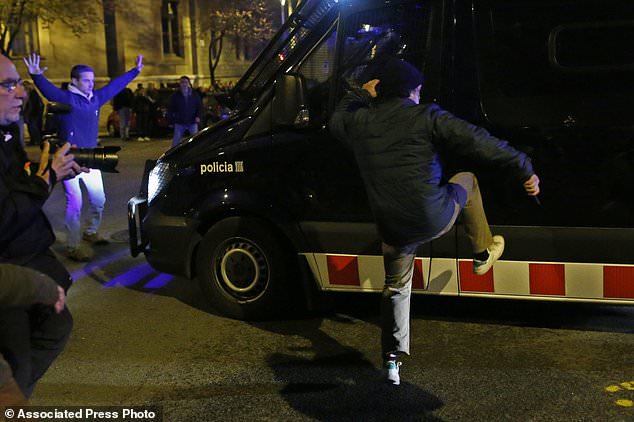 A man kicks a police van during a protest after the detention of deposed leader of Catalonia’s pro-independence party Carles Puigdemont in Barcelona, Spain, Sunday, March 25, 2018. Puigdemont was arrested Sunday by German police on an international warrant as he tried to enter the country from Denmark. (AP Photo/Manu Fernandez)

Catalonia has been without a president or government since December’s regional election, which produced a slim majority of pro-independence lawmakers in the Catalan parliament.

The Spanish government says it won’t relinquish its control over Catalonia until the region elects a new government that respects Spain’s Constitution and a president who isn’t facing legal proceedings.

The separatist majority failed for a third time to elect one of its own as regional president during a vote on Thursday.

Jordi Turull, a former minister in the previous Catalan government, fell short of the parliamentary votes he needed because of a split within the three parties who seek independence.

The separatist movement has long been dogged by quarreling.

Turull’s failure started a two-month countdown to another election being called if no president is elected to form a government. A ballot could be held in the summer.

A Spanish Supreme Court judge’s decision on Friday to charge 13 Catalan separatist politicians with rebellion could snatch away the secessionist movement’s political leadership and leave its ambitions in disarray. 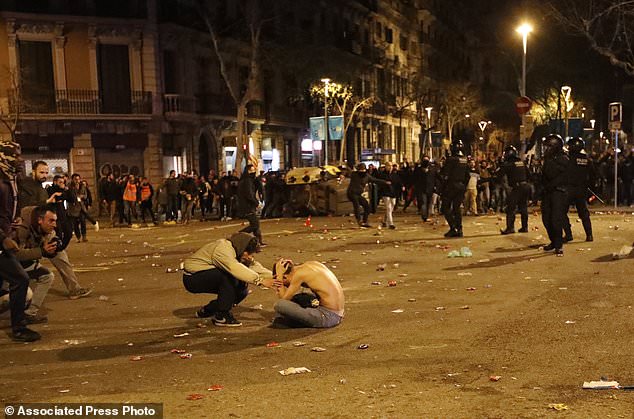 A man sits on the ground holding his head as Catalan Mossos d’Esquadra regional police officers clash with pro-independence supporters trying to reach the Spanish government office in Barcelona, Spain, Sunday, March 25, 2018. Grassroots groups both for and against Catalan secession called for protests Sunday in Barcelona after Carles Puigdemont, the fugitive ex-leader of Catalonia and ardent separatist, was arrested Sunday by German police on an international warrant. (AP Photo/Emilio_Morenatti)

Puigdemont’s arrest stung the separatists, who were still smarting from the imposition of direct rule.

Annual pro-independence demonstrations in Barcelona have routinely drawn around 1million people, but they have been notably nonviolent. With hostility increasing, however, Catalonia is a potential powder keg.

The secession issue has deeply divided the region, splitting families and friends. Polls show Catalonia’s 7.5million residents are equally divided over secession, although a majority support holding a legal referendum on the issue.

Pro-Spain parties in the Catalan parliament say their secessionist rivals are single-issue parties and have neglected the region.