Ex-chief prosecutor Nazir Afzal says coronavirus fatalities are under-reported as he reveals death of brother, 71, adding: ‘Praying for your loved one wearing masks and gloves is what nightmares feel like’

Ex-chief prosecutor Nazir Afzal said that coronavirus fatalities are under-reported as he revealed the death of his brother.

His 71-year-old brother, ex-Home Office translator Umar, died at home today, leaving the legal expert saying that praying for a loved one wearing masks and gloves is what nightmares feel like.

Mr Afzal announced the devastating loss on social media as he raised concerns about the way deaths are being recorded. 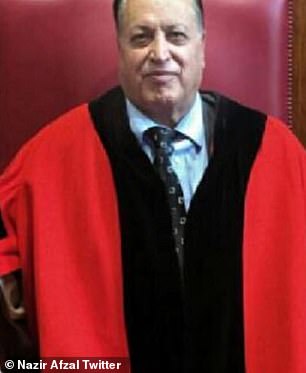 Nazir Afzal (pictured, left) has revealed that his brother Umar (right) has died and says the UK is under-reporting deaths due to the virus

He said: ‘Following my brother’s death from Covid-19 I learnt: 1. We are substantially under-reporting deaths by not including home & care

‘2. Praying for your loved one wearing masks and gloves is what nightmares feel like.

In another tweet, he explained his concerns about the way in which deaths are recorded.

He wrote: ‘My dear eldest brother Umar has passed away at home today. The certificate will say “Natural Causes” but he tested + for coronavirus.

‘Let him be remembered for the joy he gave us all, not the way he died. May he rest in peace. I miss him terribly.’

And Mr Afzal revealed that his heartbroken 91-year-old mother was forced to see her son for the last time through a window.

‘My 91yr old mum, herself attached to an oxygen tank, asked to see her first born son’s face one last time through the window as he lay in a body bag,’ he said.

‘The zip was opened to allow this. It’s these moments of humanity & compassion that COVID19 cannot take away from you.’ 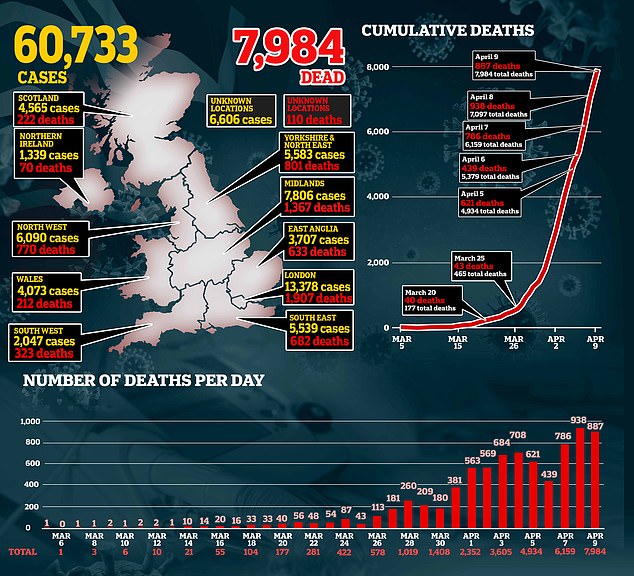 NHS England announced 765 more fatalities in its hospitals among patients aged between 24 and 103, taking England’s total to 7,248.

The Scottish Government announced this afternoon that 81 more people had died there, taking the national total to 447, and Wales confirmed a further 41 fatalities, increasing its own number of victims to 286.