A former colonel has launched a £2million compensation bid over claims she was hounded out of her job after turning whistleblower to expose a medical scandal in the Armed Forces.

Mary Roohan was treated appallingly following her decision to highlight ‘serious concerns’ about failings in health records for Britain’s 147,000 full-time soldiers, sailors and RAF personnel, it is alleged.

Her case has emerged three months after military doctors warned that service personnel are in danger of being given the wrong drugs and missing life-saving vaccinations because their GPs are routinely locked out of patient records stored on forces IT systems.

After trying to raise the alarm about the issue, Colonel Roohan is said to have been subjected to a campaign of sex discrimination, harassment and victimisation.

Mary in Iraq in 2003. Army chiefs are engulfed in an explosive #MeToo scandal amid claims a senior Army officer suffered sex discrimination after she turned whistle-blower

Her case could lift the lid on the sexist culture in the military and could prompt #MeToo complaints from other women who have suffered ‘gender prejudice’ while serving their country.

The £92,000-a-year Army officer was allegedly referred to as ‘the skirt’ by one senior colleague, while another commented that she ‘looked hot’. A third is said to have made an extremely distasteful sexual remark about her.

Details of how she suffered sexual harassment in the officers’ mess at a military base could also be laid bare in her legal action against the Ministry of Defence, as well as the claim that some female Army officers insist on wearing wedding rings on overseas operations in a bid to deter unwanted sexual advances from colleagues.

Colonel Roohan, who is in her 50s, is one of the most senior female Army officers to have brought a sex discrimination claim against the MoD, and three senior military figures – all men who have served as a general, an air marshal and a rear admiral – face the prospect of being called to give evidence.

Her alleged ordeal plunged her into a stress-related illness, anxiety and major depressive episode before she was given a medical discharge from the Army last month after two years on sick leave.

How GPs warned of IT meltdown danger

Colonel Mary Roohan was not alone in believing that failings in the military’s IT healthcare systems jeopardised the care of members of the Armed Forces.

Doctors warned three months ago that service personnel are at serious risk because of chronic computer failures at military surgeries.

Patients are in danger of being given the wrong drugs and missing life-saving vaccinations because GPs are often locked out of patient records, they said. Their concerns included claims that GPs’ computer screens freeze almost daily, patient records disappear, appointments are lost and notes on one patient pop up on a doctor’s screen during another patient’s consultation.

According to legal papers, Colonel Roohan sent an email to senior officers in March 2015 saying that she had uncovered failings concerning ‘a serious risk to patient safety caused by the inability to access the healthcare records’ and ‘loss of patient data’. But her call for an investigation was ignored.

Colonel Roohan, a vet who joined the Royal Army Veterinary Corps in 2001, says she became concerned about the system for storing and accessing healthcare records after being promoted to colonel in 2013 and appointed assistant head of medical information systems delivery in the Armed Forces.

During her military career, she served in Iraq – where in 2003 she met Tony Blair during a visit by the then prime minister – Afghanistan and the Balkans. 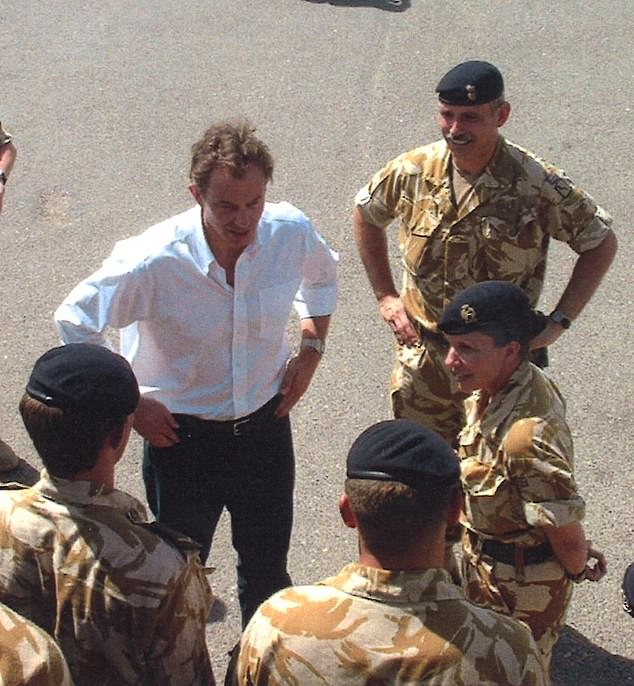 During operations in 2003 at Umm Qasr port in southern Iraq, Mary introduced the then-PM Tony Blair to the soldiers

According to legal papers, Colonel Roohan should have been given protection after complaining about the ‘parlous’ system for storing medical records in the military.

But instead she was treated differently because she was a ‘female whistleblower’ in an ‘extremely male-dominated environment’.

Colonel Roohan’s £1million damages claim at an employment tribunal is for sex discrimination, harassment and victimisation.

In the High Court, she is also seeking a minimum of £958,000 compensation for ‘psychiatric injury’, bringing the total payout to around £2million.

Last night she declined to comment on her legal action. But a spokesman told the Mail: ‘Mary Roohan feels she had no choice but to bring this action to protect other female whistleblowers at the MoD from suffering the same treatment for doing the right thing.

‘By revealing the institutional sexism female whistleblowers face, this case will highlight the wider issues of gender prejudice in the military despite the progress being made in the civilian sphere.’

The MoD said: ‘Anyone who suspects wrongdoing should feel safe to raise their concerns, which is why we have a robust framework in place that includes a dedicated, confidential hotline. As legal proceedings are ongoing, we are unable to comment on this case.’