Robert Woodbridge, 59, claimed he was in such pain that he could not even use a TV remote or switch on his computer

A disgraced Labour councillor was exposed as a disability benefits cheat after he was caught building a shed – while claiming he could walk ‘zero metres for zero minutes’.

Robert Woodbridge, 59, claimed to be in such pain that he could hardly move.

But the former deputy leader of Swanley Town Council in Kent was caught carrying items to his car, driving and even building a shed during a probe by the Department of Work and Pensions.

Woodbridge, who later stood in elections for the Green Party and Liberal Democrats, denied dishonestly failing to notify a change of circumstances.

He claimed he had good and bad days, but was convicted by a jury at Maidstone Crown Court today in just 20 minutes.

Edmund Fowler, prosecuting, said Woodbridge initially made a legitimate claim for the allowance in 1997.

But after he renewed his claim in December 2013 he received a higher rate ‘care component’ paid on the basis he needed help both day and night care.

Woodbridge, of Swanley, also got more taxpayers’ cash for a higher rate mobility component payable on the basis he was virtually unable to walk. 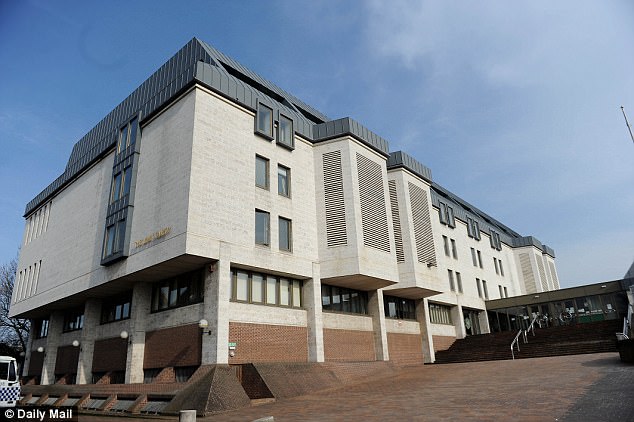 Despite claiming he could not walk,surveillance footage showed Woodbridge pushing a wheelbarrow and sawing a plank of wood near his home in Swanley, Kent, Maidstone Crown Court heard

Mr Fowler said: ‘We are not questioning the basis of his initial application. This case is about what happened subsequently, because it came to light that his mobility and care needs had improved.

‘He failed to declare a change of circumstances to the DWP, as required.’

Mr Fowler added: ‘He said he could walk zero meters for zero minutes before feeling severe pain. The pain started as soon as he got up and started walking. He used sticks to walk. He stumbled, tripped and fell often.

‘His days were mostly the same as the pain was always there.  He suffered pain in his knees and ankles when he walked and was unable to stand for long. The Crown say there was a change in those circumstances.

‘He talks of aids, handrails on stairs, pain and discomfort in his wrists and knees, walking sticks to help walk in and out of doors.’

Woodbridge said: ‘Pain and discomfort starts when I start walking as soon as I get up. Walking is extremely poor. I can only walk with the support of sticks. I have sharp pain in my knees and ankles which cause me to fall.’

Woodbridge, who attended council meetings twice a week, said he was so bad he could not even use the TV remote control.

Mr Fowler said when surveillance was carried out investigators saw Woodbridge appear to walk without a stick, crossing roads, climbing up to particular places and spending time apparently independently.

In a film clip he was shown putting his walking stick into a wheelbarrow.

He said: ‘It appears he was able to build a shed sawing and hammering while at his allotment, using his foot to steady a plank as he was sawing.

‘The duty is to give a prompt notification for any change. The Crown say the defendant acted dishonestly in all this.’

Woodbridge was granted bail until sentencing next month on November 27.