A former military analyst for Fox News says he was kept off-air because he refused to unconditionally support president Donald Trump.

Ralph Peters, a retired U.S. Army officer, wrote an essay for the Washington Post where he lays out the reasons he quit the network.

He alleges that beginning in the Fall of 2016, he was increasingly blocked from speaking on his issues of expertise: Russian affairs and the intelligence community.

The essay, published on Friday, reads: ‘I did not hide my views at Fox and, as word spread that I would not unswervingly support President Trump and, worse, that I believed an investigation into Russian interference was essential to our national security, I was excluded from segments that touched on Vladimir Putin’s possible influence on an American president.

Over and out: Ralph Peters, a retired U.S. Army officer, says he was kept off-air because he refused to unconditionally support president Donald Trump

If he had been allowed to speak on the matters, Peters says he would have given his expert opinion that Trump’s behavior patterns and weaknesses such as ‘financial entanglements, lack of self-control and sense of sexual entitlement’ make him an ‘ideal blackmail target.’

The former serviceman argues that the ‘best sailors’ in the network have been ‘driven overboard by the rodents’ and the oath he took ‘support and defend the Constitution’ never expires.

‘As Fox’s assault on our constitutional order intensified, spearheaded by its after-dinner demagogues, I had no choice but to leave. ‘

However, he clarified: ‘Fox never tried to put words in my mouth, nor was I told explicitly that I was taboo on Trump-Putin matters. I simply was no longer called on for topics central to my expertise.’

Peters had previously said he quit the network because he believed it had turned into a propaganda machine for the Trump administration. 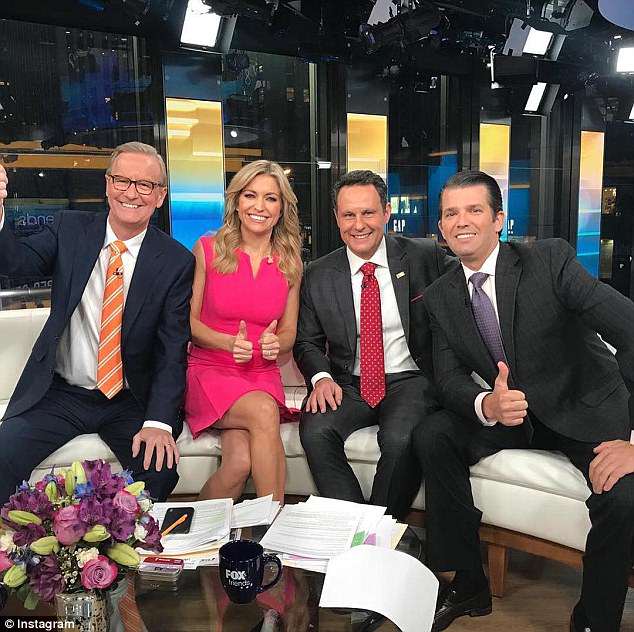 Don and Friends: He also claimed the network had ‘degenerated’ into a ‘propaganda machine for a destructive and ethically ruinous administration’ (Don Jr with the hosts of Fox & Friends)

He said on Tuesday he told Fox at the beginning of the month that he did not want his contributor contract renewed.

‘Over my decade at Fox, I was long proud of the association,’ Peters wrote in an email that was distributed to colleagues at Fox News, and first reported by BuzzFeed.

On Friday’s essay, Peters admits he stayed longer at the network than he believes he should have because the chance to speak to millions of Americans is ‘seductive’ and he thought he could make a difference from the inside.

He also took issue with what he called the network’s assault on our intelligence community’ and that his attempts to defend the system were blocked.

‘Trump idolaters and the merrily hypocritical prime-time hosts are destroying the network — no matter how profitable it may remain,’ Peters explained.

Fox News said in a statement:  ‘There is no truth to the notion that Ralph Peters was “blocked” from appearing on the network to talk about the major headlines, including discussing Russia, North Korea and even gun control recently. In fact, he appeared across both networks multiple times in just the past three weeks.’ 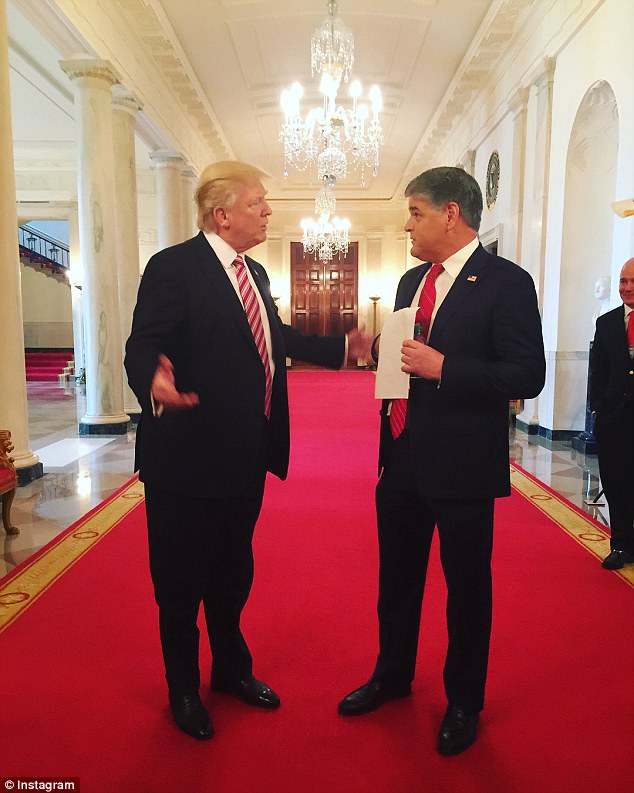 Buds: ‘Over my decade at Fox, I was long proud of the association. Now I am ashamed,’ wrote Peters (President Trump and Hannity above)

Peters has said he believes Fox News had ‘degenerated from providing a legitimate and much-needed outlet for conservative voices to a mere propaganda machine for a destructive and ethically ruinous administration.’

He criticized prime-time hosts for ‘profoundly dishonest assaults’ on the FBI, the Justice Department, the courts, the intelligence community and special counsel Robert Mueller, who is conducting an investigation into the Trump administration’s dealings with Russia.

He accused the network of ‘scaremongering’ with lurid warnings of deep-state machinations.

Peters did not mention any names, but Fox’s leading prime-time host, Sean Hannity, has been the most vocal defender of the president while talking of a ‘deep state’ and casting doubt on justice officials. 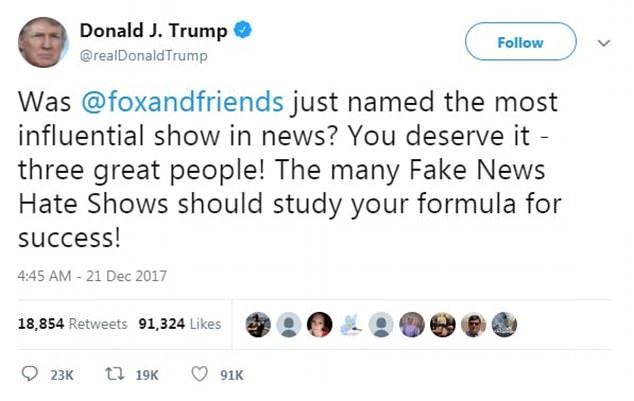 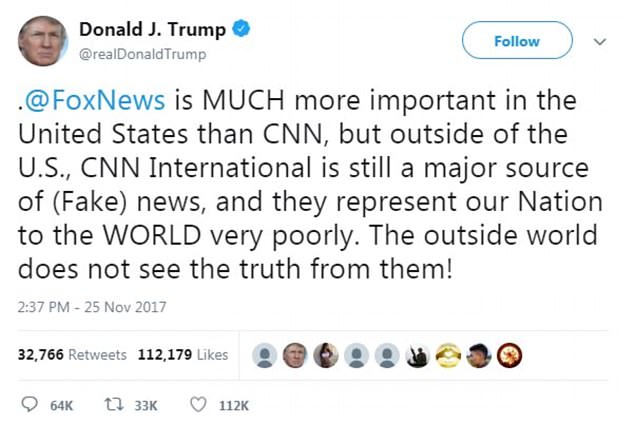 Trump has been an avid watcher of Fox News, most notably its morning Fox & Friends program

Trump has been an avid watcher of Fox News, most notably its morning Fox & Friends program.

Fox News had an intramural debate of its own last week when news anchor Shepard Smith, who just renewed his contract, said in an interview with Time magazine that Fox’s opinion hosts ‘don’t really have rules’ and can say whatever they want.

He said the opinion lineup is there primarily as entertainment.

That led Hannity and Ingraham to fire back, saying their shows have made news.

Peters said it appalled him that ‘hosts who made their reputations as super-patriots’ now advance the agenda of Russian President Vladimir Putin by making light of Russian involvement in the 2016 U.S. presidential election.

Peters was suspended by Fox News for two weeks in 2015 for using a crude word to describe then-President Barack Obama during an appearance on the Fox Business Network.

Peters also made headlines recently when he called for a ban on all assault weapons.

RALPH PETERS QUITS FOX NEWS AND SAYS HE IS ASHAMED

On March 1st, I informed Fox that I would not renew my contract. The purpose of this message to all of you is twofold: First, I must thank each of you for the cooperation and support you’ve shown me over the years. Those working off-camera, the bookers and producers, don’t often get the recognition you deserve, but I want you to know that I have always appreciated the challenges you face and the skill with which you master them.

Second, I feel compelled to explain why I have to leave. Four decades ago, I took an oath as a newly commissioned officer. I swore to “support and defend the Constitution,” and that oath did not expire when I took off my uniform. Today, I feel that Fox News is assaulting our constitutional order and the rule of law, while fostering corrosive and unjustified paranoia among viewers. Over my decade with Fox, I long was proud of the association. Now I am ashamed.

In my view, Fox has degenerated from providing a legitimate and much-needed outlet for conservative voices to a mere propaganda machine for a destructive and ethically ruinous administration. When prime-time hosts–who have never served our country in any capacity–dismiss facts and empirical reality to launch profoundly dishonest assaults on the FBI, the Justice Department, the courts, the intelligence community (in which I served) and, not least, a model public servant and genuine war hero such as Robert Mueller–all the while scaremongering with lurid warnings of “deep-state” machinations– I cannot be part of the same organization, even at a remove. To me, Fox News is now wittingly harming our system of government for profit.

As a Russia analyst for many years, it also has appalled me that hosts who made their reputations as super-patriots and who, justifiably, savaged President Obama for his duplicitous folly with Putin, now advance Putin’s agenda by making light of Russian penetration of our elections and the Trump campaign. Despite increasingly pathetic denials, it turns out that the “nothing-burger” has been covered with Russian dressing all along. And by the way: As an intelligence professional, I can tell you that the Steele dossier rings true–that’s how the Russians do things.. The result is that we have an American president who is terrified of his counterpart in Moscow.

I do not apply the above criticisms in full to Fox Business, where numerous hosts retain a respect for facts and maintain a measure of integrity (nor is every host at Fox News a propaganda mouthpiece–some have shown courage). I have enjoyed and valued my relationship with Fox Business, and I will miss a number of hosts and staff members. You’re the grown-ups.

Also, I deeply respect the hard-news reporters at Fox, who continue to do their best as talented professionals in a poisoned environment. These are some of the best men and women in the business..

So, to all of you: Thanks, and, as our president’s favorite world leader would say, ‘Das vidanya.’