After transferring out of Louisville and South Carolina, Brian Bowen II now plays professionally for the Sidney Kings of Australia’s National Basketball League

Brian Bowen II, the 20-year-old basketball player at the center of the federal investigation into bribery and corruption within NCAA recruiting circles, is suing Adidas and other individuals, alleging that that they violated the Racketeer Influenced and Corrupt Organizations (RICO) Act.

In a lawsuit that accuses apparel companies of ‘exploitation’ and using collegiate players as ‘slave labor,’ Monday’s filing seeks to ban Adidas from sponsoring Division I Men’s basketball programs.

Under the ‘Relief Requested’ section of the filing, Bowen’s attorneys ask that: ‘Enjoining Defendant Adidas and its employees, officers, directors, agents, successors, assignees, merged or acquired predecessors, parent or controlling entities, subsidiaries, and all other persons acting in concert or participation with it from engaging in sponsorship of NCAA Division I men’s basketball programs.’ 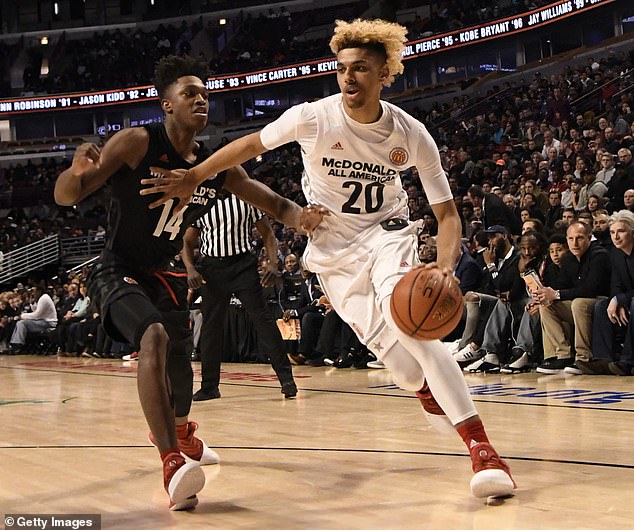 A McDonald’s All-American in high school, Brian Bowen II surprised insiders when he chose to go to Louisville – a school that had not recruited him, but one that was sponsored by Adidas

‘Adidas has thus far infiltrated college basketball with complete impunity,’ said lead attorney Mullins McLeod in a statement. ‘It is now time for them to answer for what they have done and to suffer the consequences of their corporate misconduct. Brian is an exceptional young man who is determined to right this wrong and to do his part to help free other student athletes from corporate corruption that has no place in college basketball.’

An Adidas spokesperson did not immediately respond to a request for comment.

A McDonald’s All-American while playing high school ball in Indiana and Michigan, Bowen surprised college basketball insiders in 2017 when he committed to Louisville – a school that had not previously recruited him.

In October, a federal jury in Manhattan found former Adidas executive James Gatto, business manager Christian Dawkins and amateur league director Merl Code guilty of fraud charges, and prosecutors claimed that the three were involved in a plot to bribe Bowen’s family $100,000 in exchange for his commitment to Louisville – a school that was sponsored by Adidas.

Bowen was later declared ineligible by the school and transferred to South Carolina before signing to play professionally in Australia. 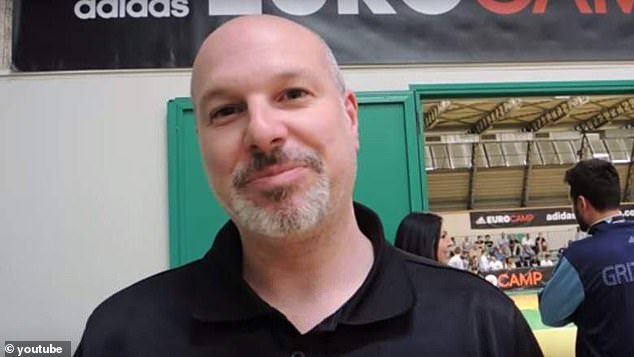 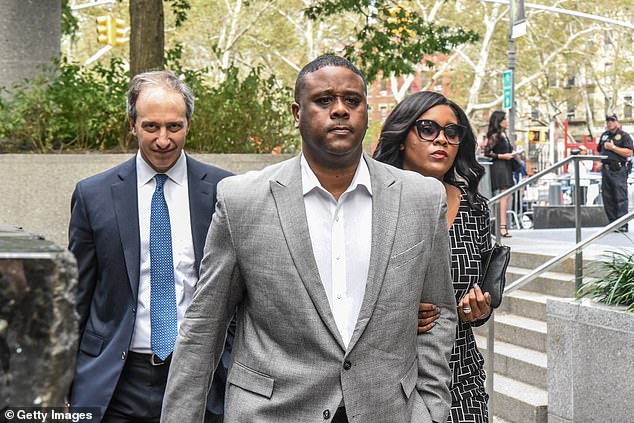 Merl Code, a former Adidas consultant, was also convicted of fraud in the first of what should be several trials involving corruption and bribery within college basketball recruiting circles 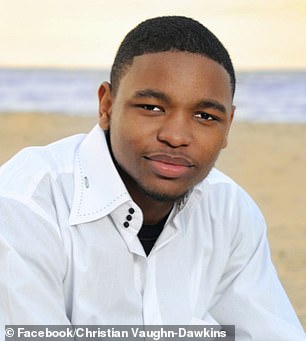 A former sports agency employee, Christian Dawkins was accused of arranging bribes for the family of Brian Bowen II in exchange for his commitment to Louisville

According to a press release by Bowen’s attorneys, the McLeod Law Group, Bowen was unaware of the plot to bribe his family for his commitment to Louisville.

‘Plaintiff is informed and believes many responsible, for-profit corporations would classify Adidas’s infiltration of amateur athletics and use of an individual athlete without compensating him as nothing more than exploitation,’ read the filing. ‘For Adidas, however, it was business as usual. Perhaps the profits were so lucrative Adidas and its executives convinced themselves that exploiting amateur athletes like Brian for profit is acceptable much the same way plantation owners convinced themselves that slave labor was acceptable.’

At the time, acting U.S. attorney in Manhattan Joon H. Kim announced that the investigation, launched in 2015, focuses on ‘the criminal influence of money on coaches and student-athletes who participate in intercollegiate basketball governed by the N.C.A.A.’ Kim referred to the underground economy as the ‘dark underbelly’ of college athletics.

Two separate schemes have been investigated: One in which recruits and their families allegedly received bribes in exchange for commitments to specific universities, and another in which player advisers were supposedly paid to persuade the athletes to sign with certain managers, agents, and financial advisers.

The ensuing scandal ultimately led to the firing of Hall of Fame coach Rick Pitino, although he has not been charged with any crime. Pitino has continued to deny any involvement in the scheme to pay players. 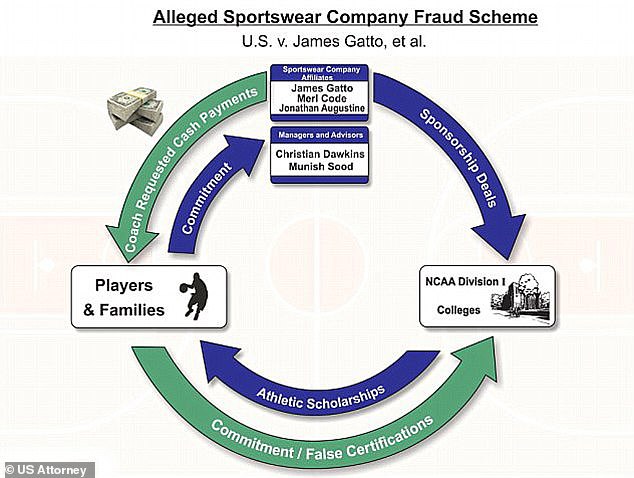 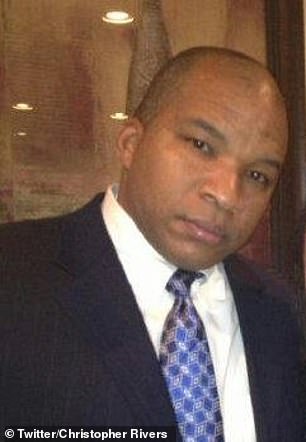 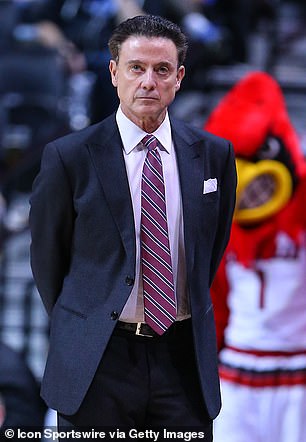 Adidas player relations manager Christopher Rivers was also named in Bowen’s lawsuit. Coach Rick Pitino (right) would have been Bowen’s coach at Louisville last season, but was fired in the wake of the scandal as Bowen transferred to South Carolina before leaving the college ranks 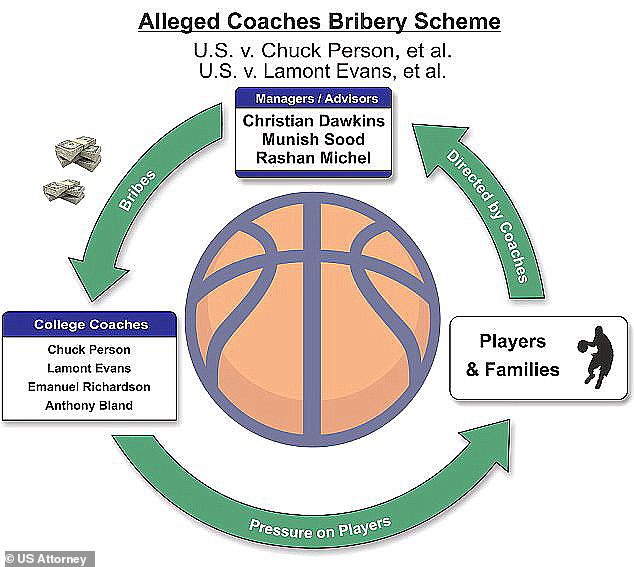 One of the two schemes investigated by federal authorities involves player advisers allegedly paying assistant coaches to persuade the athletes to sign with certain managers, agents, and financial advisers when they went to the professional ranks

In 2019, another trial is expected to start involving four assistant basketball coaches, including former NBA star and Auburn assistant Chuck Person, who is accused of soliciting bribes and honest services fraud.

In response to the federal investigation, the NCAA started its own committee on college basketball, headed by former Secretary of State Condoleezza Rice, and aimed ending corruption in recruiting circles.

The NCAA has since announced several major rule changes, the most significant of which allows college players to have a relationship with agents. However, only players identified as an elite prospect by USA Basketball beginning July 1 before their senior year would be eligible to do so.

NCAA president Mark Emmert has steadfastly refused to consider allowing players to be compensated, either by the schools or by sponsors.

In March, the NCAA reported that its 2017 revenue exceeded $1 billion.