Marcos Rojo must have dreamed of playing in the Superclasico against River Plate when he joined Boca Juniors earlier this year but his taste of Argentina’s biggest fixture in front of fans did not last long.

The former Manchester United defender was sent off in only the 16th minute of Sunday’s game at River’s Monumental stadium after picking up two yellow cards in two minutes.

The red card cost his team dear as Julian Alvarez struck twice for River in the first half. 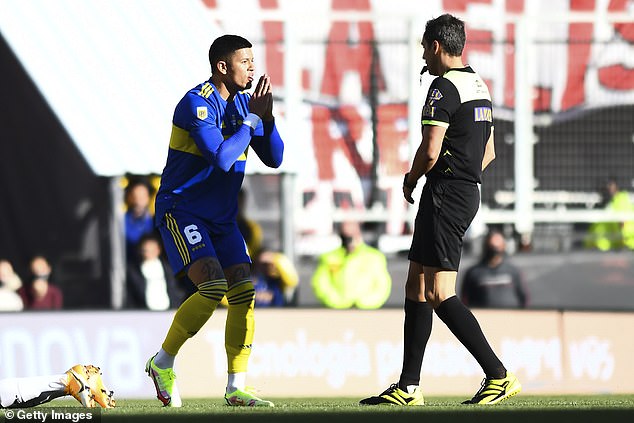 Boca managed to avoid a humiliating result and managed to pull goal back in added time through Carlos Zambrano but still lost 2-1 as some 50,000 River fans celebrated victory in the first Superclasico to take place in front of fans since 2019.

Rojo earned his first yellow for a wild lunge on Braian Romero in the middle of the park and remonstrated with the referee after he was shown the card.

The booking did little to calm him down though and less than 60 seconds later he clattered into Agustin Palavecino on the edge of the area and was shown a second yellow, to the delight of the baying home supporters. 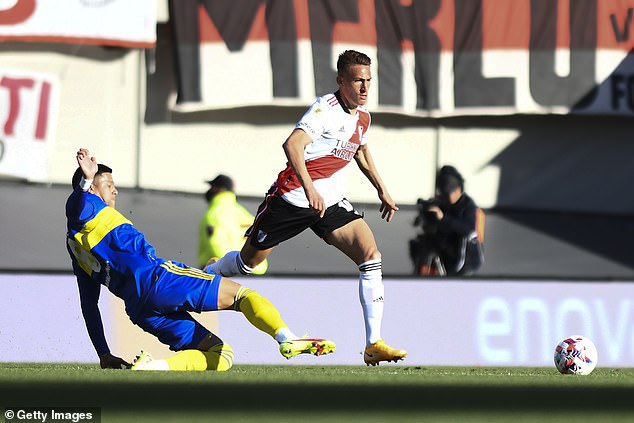 It is not the first time Rojo has run into trouble since returning to Argentina.

Three months ago he and several Boca team-mates were caught up in a huge brawl during a Copa Libertadores game away to Brazilian side Atletico Mineiro which led to Rojo punching a security guard.

Boca were left incensed after a goal from Marcelo Weigandt was controversially ruled out by VAR in the second-leg of their round of 16 tie against Brazilian side Atletico Mineiro. 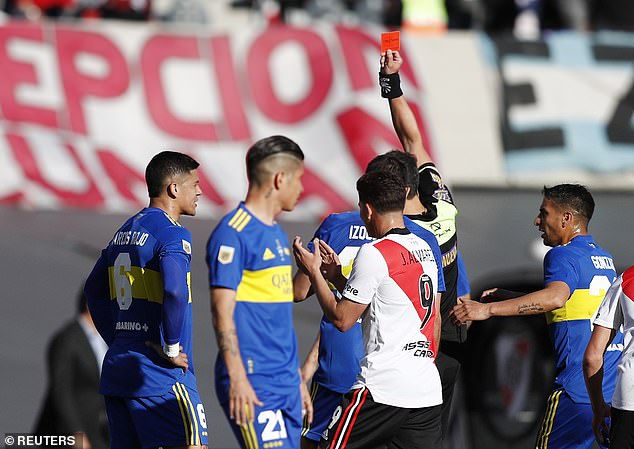 The match went to penalties where Boca were defeated 3-1 and the evening soon descended into chaos as the Argentine side tried to break into the Mineiro dressing room before later clashing with police, who used tear gas in response.

Rojo’s red card in such a crucial game will be of little surprise to Manchester United fans who remember his time at the club.

Remarkably, the Argentine was never sent off in his six years in the Premier League although he had more than a few near misses.

Watford’s then boss Marco Silva complained that Rojo was not sent off in a 4-2 home defeat to United in November 2017 after fouling Roberto Pereyra and conceding a penalty, having already been shown a yellow card.

Rojo was also fortunate to not see red in a 1-1 draw at Everton in December 2016 following a reckless foul on Idrissa Gueye, while he could also have been sent off on two separate occasions against Chelsea. 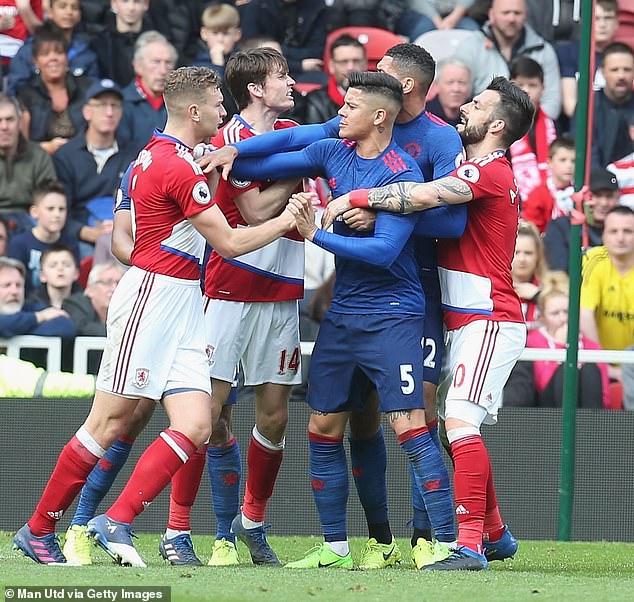 The Argentine appeared to stamp on Eden Hazard in a 1-0 FA Cup defeat at Stamford Bridge in 2017 while Chelsea’s then boss Maurizio Sarri felt he should have been dismissed in a 1-1 draw at Old Trafford in April 2019.

Sunday’s quick-fire double booking against River was the fifth time Rojo had been sent off in his career.

He received three red cards while a Sporting Lisbon player – all for double bookings – and was sent off early on in the 2016 Copa America final between Argentina and Chile for a straight red card.