A former Stormont minister who spoke out about a botched green energy scheme contributed to the collapse of the powersharing institutions, Arlene Foster has claimed.

Northern Ireland’s former first minister also told a public inquiry into the scheme that she regrets she did not sack Jonathan Bell as enterprise minister.

The Renewable Heat Incentive (RHI) scheme hit the headlines in 2016 after it emerged the late introduction of cost control tariffs saw the taxpayer bill spike dramatically.

At one stage it was feared the scheme could cost the public purse hundreds of millions of pounds.

Mrs Foster had been minister at the Department of Enterprise, Trade and Investment when the RHI scheme was introduced in 2012.

Mr Bell was minister at the department from May 2015 to May 2016, over a period when costs spiked.

He has insisted he was hampered trying to introduce cost control tariffs and later to close the scheme by DUP special advisers (spads).

Mrs Foster and the spads have contested that claim. 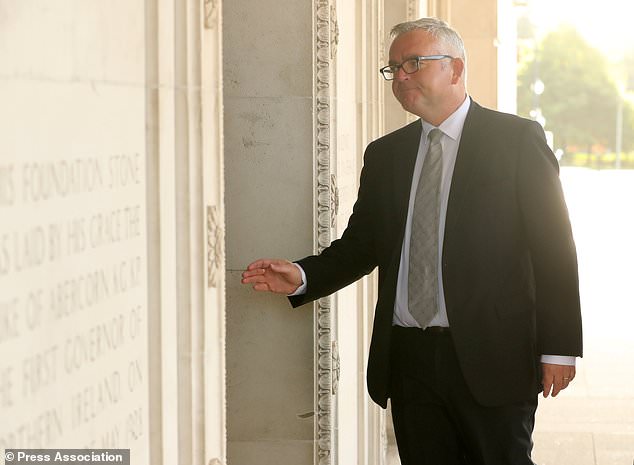 Mrs Foster claimed Mr Bell “pressed the nuclear button” by giving an interview to the BBC’s The Nolan Show about the RHI scheme.

“(Mr Bell) spoke to Nolan in a fashion that contributed to the breakdown of the Assembly,” she told the inquiry.

The DUP leader claimed that Mr Bell had “painted himself as the victim” in his interview with The Nolan Show, but this was not the case.

“Jonathan had to take what was coming to him in terms of the reaction it caused,” she said.

“We (the DUP and Sinn Fein) had agreed a plan, a way forward to deal with this issue.”

Mrs Foster said that plan had included an inquiry, a cost control plan, and her making a statement to the Assembly.

Instead, Stormont descended into crisis in December 2016 following Mr Bell’s interview with The Nolan Show.

On December 19, MLAs from every party other than the DUP walked out of the Assembly chamber when Mrs Foster rose to give a statement on the RHI scheme.

Mrs Foster said Sinn Fein took a dim view of the interview and withdrew from their plan to tackle the issue.

She received a phone call from the deputy first minister Martin McGuinness asking her to step aside.

“We were then on a trajectory to the Assembly collapsing and the Executive collapsing,” she told the inquiry.

On January 10 2017, Mr McGuinness resigned as deputy first minister and the Assembly collapsed.

Mr Bell appeared at the inquiry earlier in September and claimed the DUP was trying to “fit him up” over the RHI debacle.

Mrs Foster dismissed that, telling the inquiry that “paranoia had set in” with Mr Bell claiming the DUP was trying to blame him.

She insisted that was “not the case”.

Mrs Foster earlier on Tuesday told the inquiry with hindsight she wishes she had removed Mr Bell as a minister in January 2016.

“I didn’t think he acted in an appropriate way as a minister,” she told the inquiry.

“He saw it as a role where he was to be served rather than to serve.

“Clearly with hindsight I shouldn’t have left him there, the view was expressed to me, how much harm can he do in three months.”