Ex-model whose rosacea worsened when she fell pregnant praises a £19.95 miracle cream

A mother whose rosacea worsened when she fell pregnant with her first child has revealed an over-the-counter cream improved her skin in just four weeks.

Rebecca Morrison, 33, who lives with her husband Danny, 31, in Windsor, described how her skin flared up and became a ‘furious’ mess while she was expecting their daughter Violet, now six months old.

It was so bad she claims people noticed her skin condition before they noticed her – and she was often told she looked like she’d had ‘too much sun.’

After being advised by a midwife to stop using the antibiotics she had previously relied on, she found an unlikely alternative in the form of a £19.95 cream.

‘I saw the best results in my skin after twelve weeks of using the product,’ she said. ‘But even after just four weeks my skin stopped flaking and hurting.’

Rebecca Morrison, 33, who lives with her husband Danny, 31, in Windsor, described how her rosacea, pictured, flared up and became a ‘furious’ mess while she was expecting their daughter Violet, now six months old. Pictured, Rebecca before she started using the cream 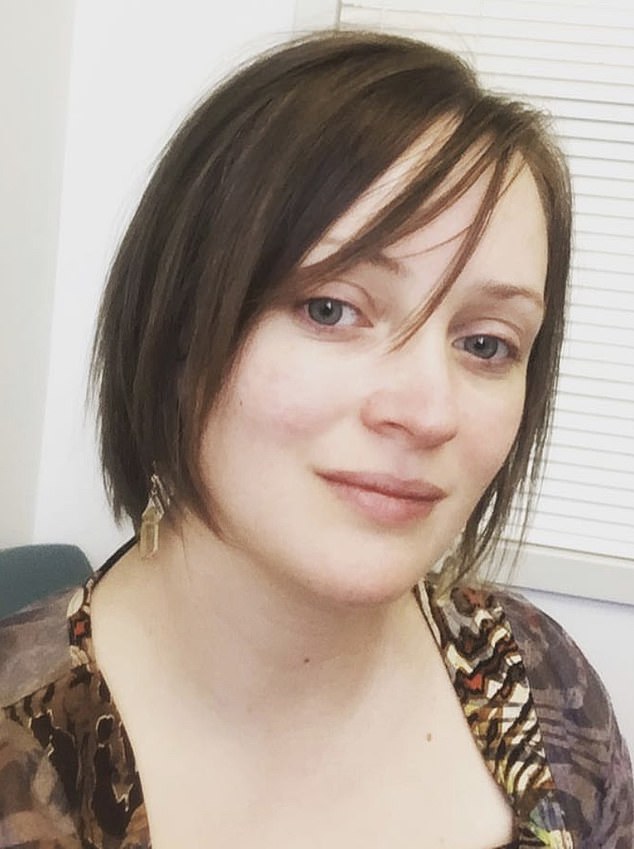 After being advised by a midwife to stop using the antibiotics she had previously relied on, she found an unlikely alternative in the form of a £19.95 cream. She saw the results in just four weeks. Above, Rebecca 12 months after she started using the product

‘As a young woman I did a lot of modelling and I was always told I have amazing skin,’ explained Rebecca. ‘But a visit to my doctor over some eye problems when I was a teenager was my first warning sign of what was to come later.

‘My doctor told me I had blepharitis and that it was a precursor to rosacea. At the time I didn’t take much notice as I felt young, beautiful and invincible. However, my blepharitis got gradually worse and then my rosacea first emerged when I was 25.’

Around that time, Rebecca had finished college, started working in HR and was trying to make new friends and get into the dating scene. 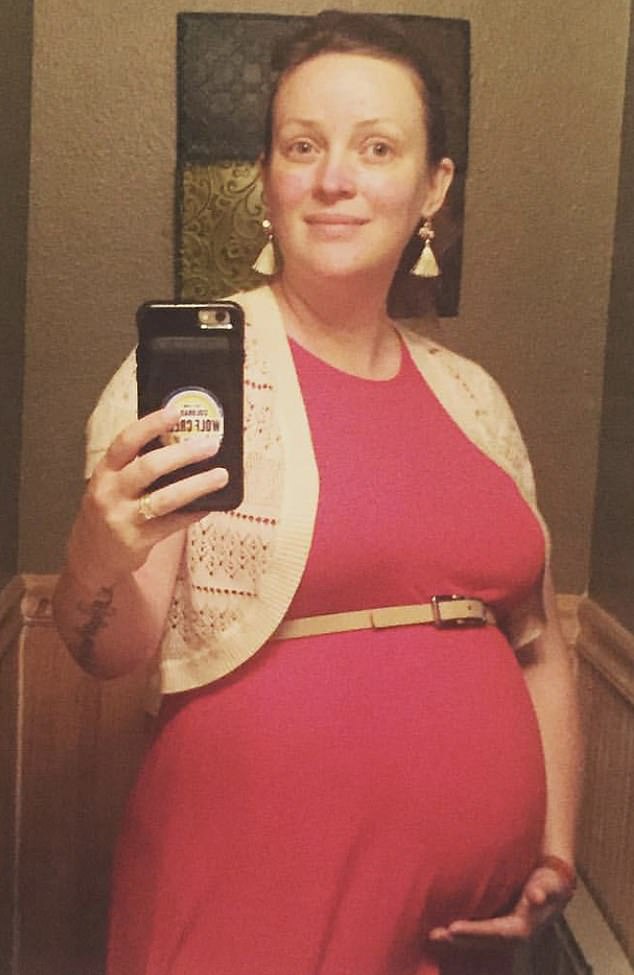 While pregnant with daughter Violet, pictured, Rebecca was told she would have to stop using the anti-biotics she had come to rely on for keeping her condition under control

‘It was very hard,’ she explained. ‘I wore loads of makeup but still felt like everyone was starring at my red bumpy skin. My confidence became very fragile because of the state of it.’ 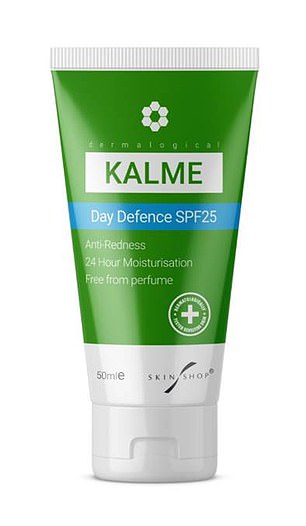 ‘Not only did my skin look awful it also really hurt. It was itchy and painful and at times it was cracked and raw.’

Over the years the mother-of-one tried everything to try and reduce her rosacea – including antibiotics, creams, lotions and cleansers.

‘I saw a lot of different doctors and was referred to a dermatologist,’ she said. ‘I was prescribed topical and oral antibiotics and even while taking them diligently my skin still flared regularly.’

She added: ‘My skin seemed to have a life of its own. I felt like me on the inside but looking in a mirror or at pictures, it was like looking at someone else. Inside I was beautiful, strong, and confident; on the outside, I was a red furious mess.’

Feeling self-conscious, Rebecca found her social life started to suffer as she didn’t want to be seen.

‘I didn’t want to go out, I avoided sun and I can’t tell you how many times I heard, “Oh! Got a little sun this weekend?” To which I would smile and say “something like that” while inside cringing that, yet again, someone noticed my rosacea before they noticed me. 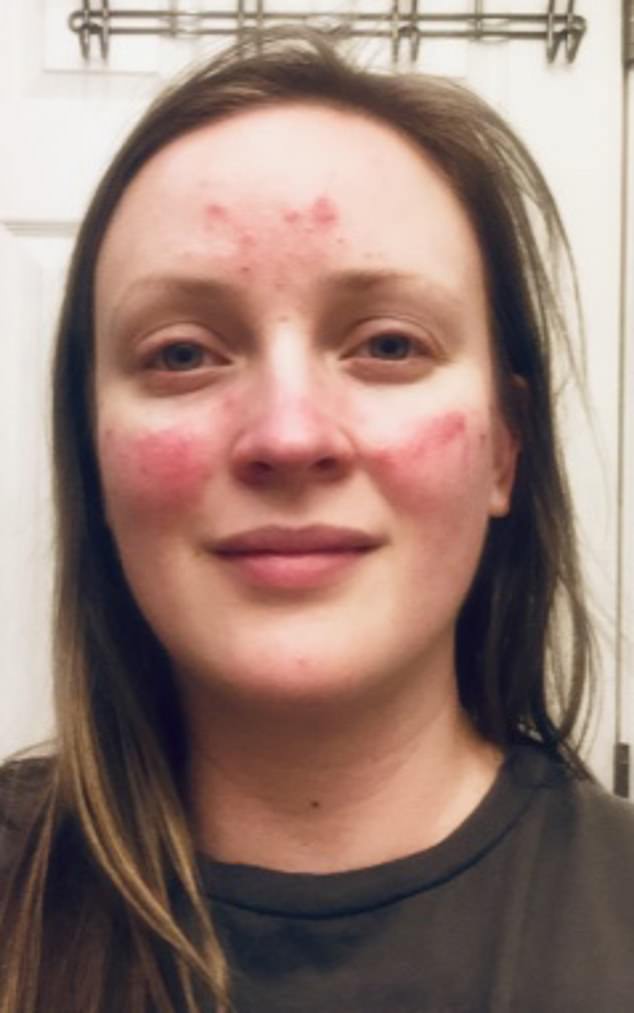 Rebecca described dealing with her skin condition as ‘very hard.’ She would try and hide it underneath lots of make up but would still feel like everyone was staring at her red bumpy skin. Above, six months before using Kalme

Speaking of another occasion, she revealed: ‘I was walking into the dermatologist’s office and she said, “Ooh, looks like that hurts…” and I burst into tears; because it did hurt. It hurt my skin and my pride.’

After meeting Danny four years ago, she claims he helped her through the darkest days when her rosacea was at its worst.

‘Despite his assurance about how much he loved me, I didn’t ever feel pretty,’ she said. 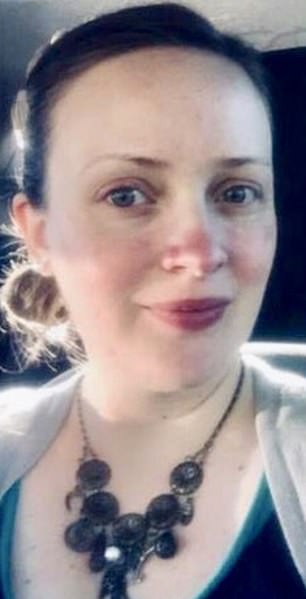 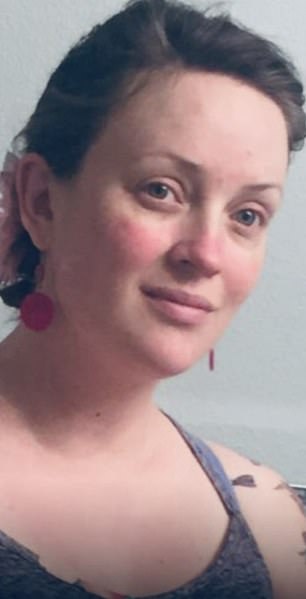 After meeting Danny four years ago, Rebecca claims he helped her through the darkest days when her rosacea was at its worst. Pictured, two months after using the product (left) 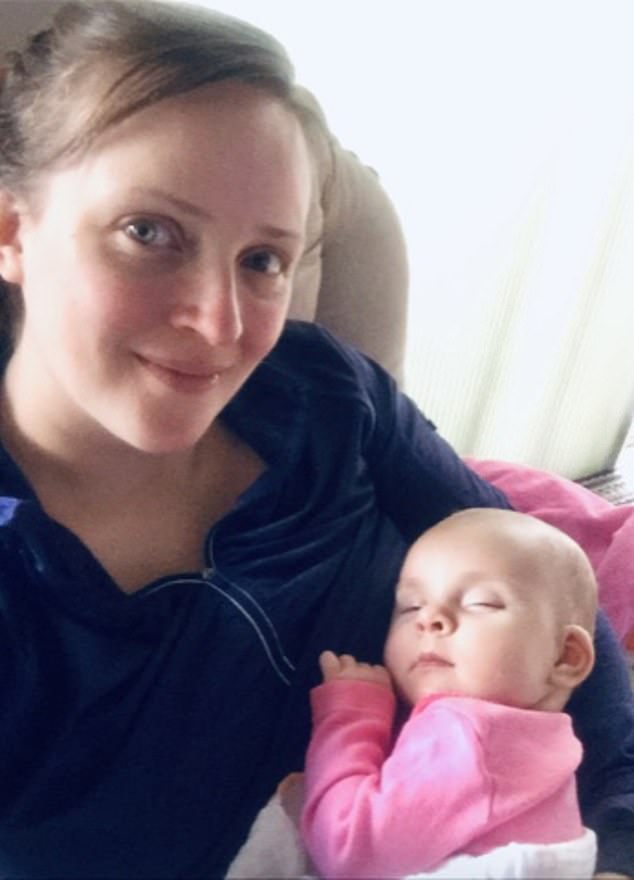 When she was pregnant and advised against stopping all medications for her rosacea, Rebecca hid away from everyone. Above, pictured with Violet, eight months after applying the product

‘I felt like all people saw was my rosacea, the redness, the bumps, the flaky skin.’

‘I wanted to be seen underneath all that and felt like I would never find someone who could see past it. I eventually did when I met Danny and he would hold me when I was crying about my skin and tell me how beautiful I was, but I still never really believed it.’

After getting married to Danny two years ago, Rebecca fell pregnant – but when she was advised not to use oral or topical antibiotics by the midwife, she was distraught. 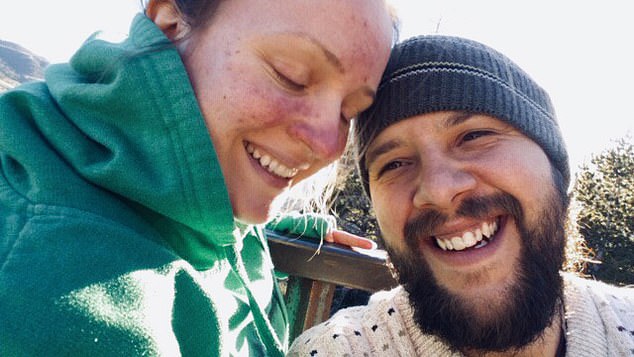 Rebecca revealed that Danny would hold her when she was crying about her skin and would her how beautiful she was. Pictured, 12 months prior to using the cream

‘I resigned myself to stopping all medications for my rosacea and decided to literally hide away from everyone while I was pregnant as I knew my skin would flare instantly as soon as I stopped taking antibiotics,’ said Rebecca.

‘But when my skin flared up like it never had before I started desperately searching for anything new for rosacea that could be used during pregnancy.’

– It can be controlled to some degree with long-term treatment, but sometimes the changes in physical appearance can have a significant psychological impact

– Rosacea is a relapsing condition, meaning there are periods when symptoms are particularly bad, but less severe at others

Then Rebecca came across the bargain product.

‘I had been spending almost double the cost of the products on medicated products and tablets so I felt I had nothing to lose in trying them,’ she reveals.

‘Besides there aren’t a lot of options for rosacea which are safe for use during pregnancy and breastfeeding.’

And after seeing improvements within four weeks, the delighted mum still follows her new skincare regime.

‘I’ve now been using Kalme for a year and have been more or less free from all the symptoms for the majority of that time,’ she says.

‘Since using product I’ve seen almost 100 per cent improvement in my skin.’

‘I still get a few pimples now and then when I’m especially stressed and get a little flush if I’m out in the sun but zero flaking skin, painful irritation or furious redness! It has truly changed my life!’ 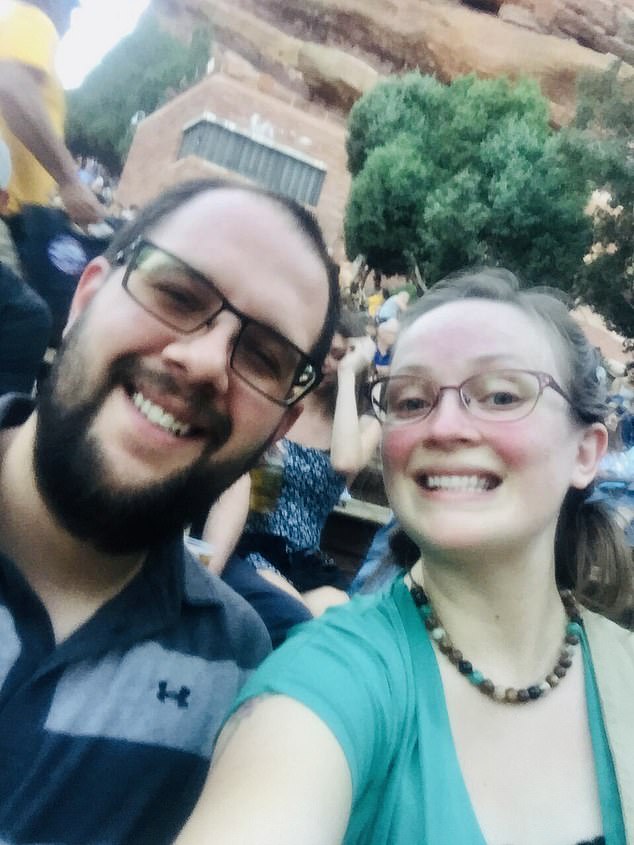 She praised him for helping her through the darkest days when her rosacea was at its worst. Above, three months after using the miracle cream