Ex-NFL star Marshawn Lynch is arrested and charged with DUI

Popular former NFL running back Marshawn Lynch was arrested for driving under the influence early Tuesday morning in Las Vegas.

‘The LVMPD conducted a vehicle stop at Fairfield Avenue and West Utah Avenue (near Wyoming and Las Vegas Blvd) on a driver, later identified as Marshawn Lynch, for suspected driver impairment,’ read the department tweet. ‘Through the course of the investigation, officers determined that Lynch was impaired and conducted an arrest. Lynch was transported to the Las Vegas City Jail and booked for driving under the influence.’

Sources told TMZ that Lynch was driving into curbs before being pulled over. The website reports that he refused a breathalyzer, but did have blood drawn.

This is not be the 36-year-old’s first driving-related arrest. In 2008, as a second-year player with the Buffalo Bills, Lynch was accused of hitting a woman with his Porsche Cayenne at 3:30am. When questioned, the former Cal Bears star said: ‘I didn’t know my car had hit anyone or anything.’

He pled guilty to a hit-and-run charge and subsequently had his driver’s license revoked.

The Oakland native was also arrested for DUI by the California Highway Patrol in 2012 after he was seen driving erratically. He ultimately registered a 0.1 in a Breathalyzer test, which is above the limit of 0.08. 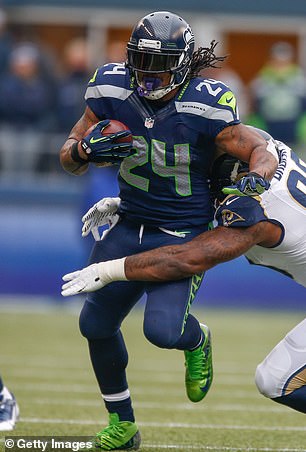 He ultimately pleaded guilty to a lesser charge of reckless driving and received two years’ probation and a $1,000 fine. However, his license was not suspended.

Lynch has also gone viral for some behind-the-wheel exploits, such as his notorious 2006 on-field cart ride when he celebrated a Cal victory by speeding around the turf in Berkeley, narrowly missing players and staff.

He recreated the moment in 2016 with his mother in the cart, much to the delight of Cal fans.

Lynch, who won a Super Bowl as a member of the Seattle Seahawks at the end of the 2013 season, has enjoyed a successful post-playing career.

He was a member of the Seattle Seahawks from 2010-15 and 2019, and was part of the first team in franchise history to win the Super Bowl. He’s a beloved figure among sports fans in the area and last year ventured into sports ownership with an investment in the Oakland Roots SC, which plays in the USL Championship, the second tier of men’s soccer in the United States.

In addition to making cameo appearances in HBO’s Westworld, he has co-owned the Beasts of the Fan Controlled Football league and the Bay Area Panthers in Indoor Football League. He’s also a minority owner of the NHL’s expansion Seattle Kraken.