A former prison officer has narrowly avoided being sent to jail herself after she looked after her boyfriend’s drug-dealing empire when he was put behind bars.

Emma Leeman, 27, was guided by her boyfriend Christopher Sirrs, 44, when he was caught in Hull, east Yorkshire and recalled to prison.

After police found £2,500-worth of amphetamine and cocaine in a raid on their home, Leeman was herself brought before court and faced a possible jail term.

But she wept at Hull Crown Court this week as she avoided imprisonment after a judge heard there could be a ‘bounty on her head’ because she is a former prison officer, the Hull Daily Mail reported.

Prosecutor Richard Woolfall said the couple were caught after police intercepted phone calls between them when Sirrs was recalled to prison.

The phone calls showed Leeman was ‘guided’ by Sirrs as she remained at home with the huge haul of drugs, prosecutor Richard Woolfall told the court.

When police moved in, amphetamines were found in the freezer and cocaine was found in a BMW car parked outside. Leeman claimed the car belonged to a ‘friend’ who she refused to name. 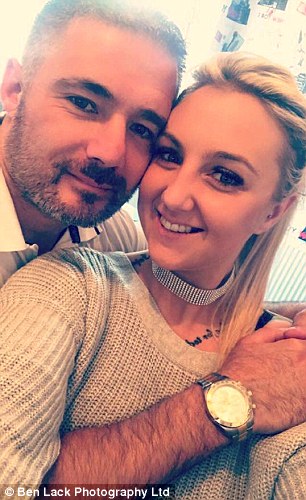 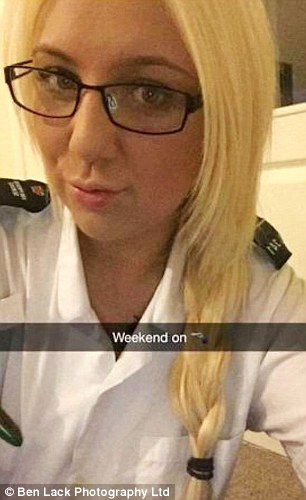 They have both now admitted drug dealing offences. Sirrs was jailed but his ex-girlfriend, a former prison offence, avoided a jail sentence

The couple claimed in court they have since split up, although their Facebook pages state they are in a relationship.

Sirrs admitted possession of amphetamine with intent to supply and possessing criminal property and was jailed for two years.

Leeman admitted possession of cocaine and amphetamine with intent to supply and possessing criminal property on the basis that she only suspected £300 to £400 of the money found was from crime.

She received a 16-month sentence, suspended for two years, and was ordered to do 140 hours of unpaid work.

Not guilty verdicts were entered on a further charge faced by both defendants of keeping a brothel after prosecutors offered no evidence. Emma Leeman wept in the dock of Hull Crown Court, pictured, as her jail term was suspended

Leeman’s lawyer Victoria Smith-Swain insisted Leeman had ‘performed a limited function under the direction of a prolific offender’.

The court heard the couple’s home had been shot at by someone who had a dispute with Sirrs.

Sirr’s lawyer, Dale Brook, told the court Sirrs had got into debt after his release from his initial prison term in 2016.

Mr Brook said: ‘He was in significant debt, his partner had been put in significant danger, and he wanted to do what he could to try and change the situation… in those difficult circumstances with debt he reverted to his old ways.’

Recorder Tahir Khan QC said he accepted Sirrs was acting out of desperation to try to raise money at the time.