Ex-policeman, 88, will die behind bars after he’s jailed for 23 years over sex attacks on girls

A former police officer will die behind bars after he was jailed for 23 years for a string of sex attacks against two young girls in the 1970s.

James Glendenning, 88, from Reddish, Greater Manchester, committed some of his offences during his 17 year career at West Midlands Police.

Mr Glendenning, who appeared in court using a Zimmer frame, was described as ‘utterly depraved and utterly wicked’ by a judge.

A court heard how Glendenning, who also served with the Royal Artillery, threatened one of his victims with the cane if they told anyone about the abuse.

During another attack, one of the girls screamed in pain and begged Glendenning to stop, jurors were told.

Jailing him for 23 years, Crown Court judge David Stockdale, sitting at Manchester and Salford Magistrates’ Court, told the defendant he didn’t have to stand in the dock because of his physical condition.

One of his victims wept as he handed down his sentence, after he was found guilty of one charge of rape, 10 counts  of indecent assault, and four counts of indecency with a child.

He told Glendenning, who denied all the charges against him: ‘You committed grave offences of sexual assault, at a time when they were young girls.

‘Your offences were utterly depraved and utterly wicked.’

The judge added: ‘The girls submitted to you because they had no choice. 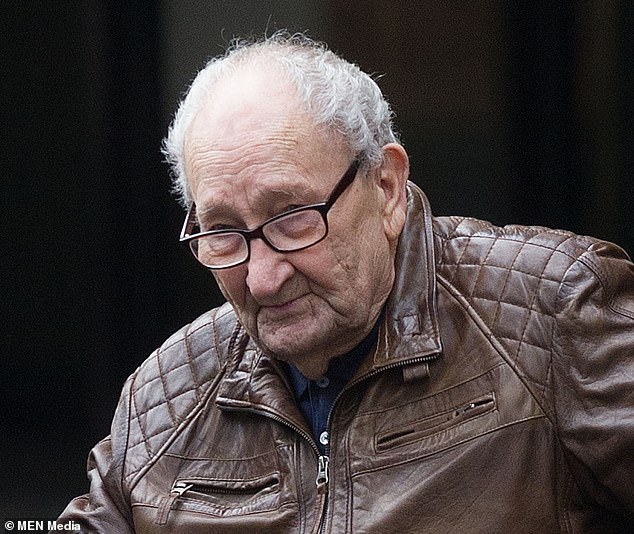 ‘You now bring disgrace to your former profession as a serving police officer. It’s difficult to imagine a more gross betrayal of trust placed in you by innocent young girls.’

Glendenning’s two victims were forced to live with the memory of the abuse for 40 years, although one of them went to police in the 1980s.

The judge said: ‘She went to the police but her account was not believed. That was devastating for her.’

An investigation was ‘relaunched’ after another complaint in 2015, the court heard.

Speaking directly to Glendenning, the judge continued: ‘You meanwhile have lied and lied again.

‘You lied to the jury over several days in the witness box. Your lies have now been exposed and the accounts of the two complainants dismissed by you as fabrication have been roundly accepted by the jury by their verdicts.’

Praising the woman for their ‘courage, stoicism and dignity’, the judge said: ‘This is long-term damage which abuse of young children inevitably causes,’

‘It’s to be hoped after all these years they may now find a degree of closure.’

Earlier, Keith Harrison, defending, referred to the ‘extreme old age’ of his client and ‘diminished life-expectancy’ because of ill-health and infirmity as mitigation.

Mr Harrison said: ‘He does not suffer from an immediate life-threatening condition, but as you have observed during the trial, he has real health problems which diminishes his quality of life.

‘He’s lost all he had in the outside world, accommodation, finances, where his life is one of life in prison. That’s the sad reality of his situation.’

Glendenning showed no reaction as he was helped from the dock down to the cells to begin his sentence.

An NSPCC spokesperson said: ‘Glendenning has shown no remorse for his actions which have had a devastating impact on the lives of his victims.

‘But because of their bravery in speaking out, Glendenning’s appalling crimes against children have finally caught up with him.

‘We hope the survivors are now receiving the support they need. At the NSPCC, our Letting the Future In service works with children who have experienced sexual abuse to overcome the experience and rebuild their lives.’