Karlie Brooks, 26, from Kentucky, alleged in a since-deleted TikTok video – which The Sun first reported was reposted on the YouTube account Tuff Talks – that she had several ‘meetups’ with Duggar, 34, around the same time that he was exposed for having multiple Ashley Madison accounts back in August 2015.

‘Speaking of Josh Duggar, I am ashamed to say this but I have slept with him,’ Brooks claims in the clip, which she appears to have filmed while sitting in her car.

‘A few years ago when the whole Ashley Madison scandal came out, I was one of the women that slept with Josh during that time.’

Duggar was originally outed as an Ashley Madison user in the summer of 2015 after the website was hacked and millions of user details were exposed to the world. He later admitted to cheating on his wife Anna, now 33, with women he met via the website, on which he had multiple accounts. 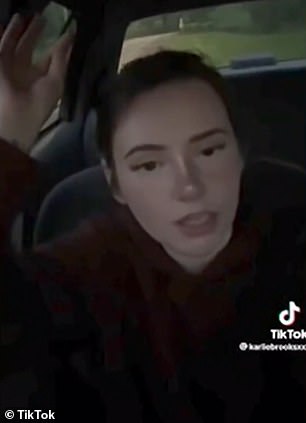 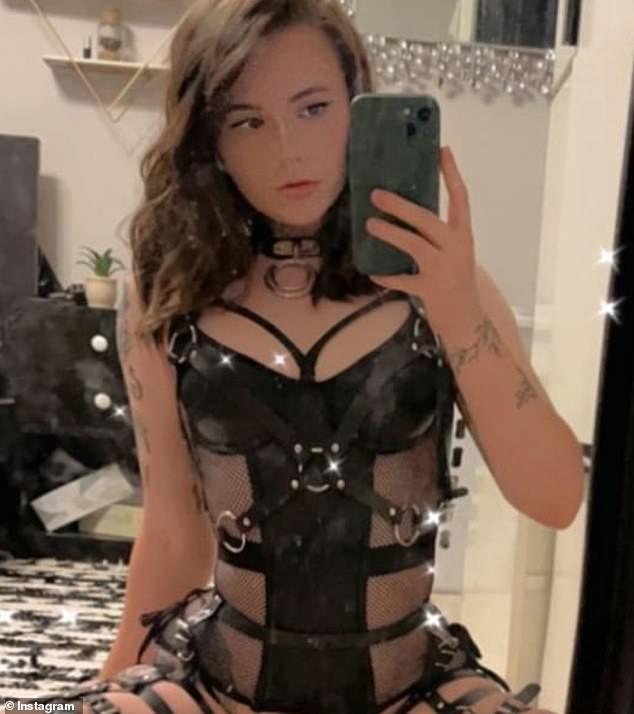 Karlie Brooks, 26, from Kentucky, alleged that Duggar, now 34, ‘paid her a generous amount’ for their ‘meetups’ in a series of since-deleted TikTok videos and comments 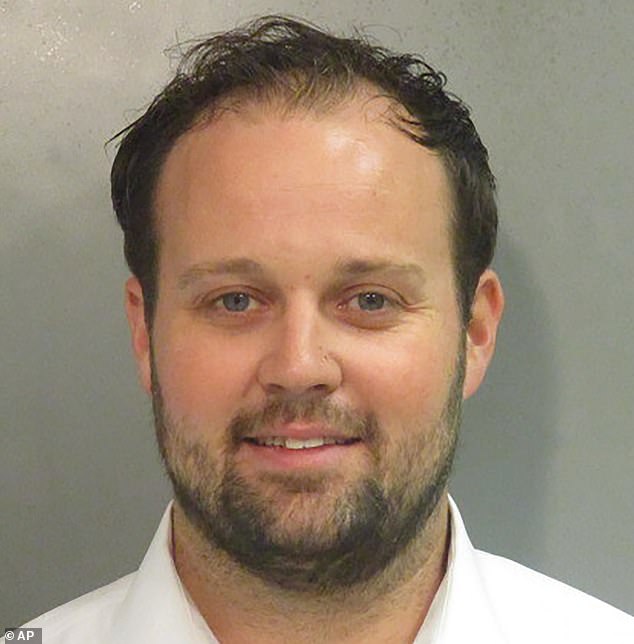 Brooks said she is ‘ashamed’ and ‘disgusted’ to have slept with Duggar (seen in his mugshot) in light of his child pornography conviction; last month he was sentenced to 12 years in jail

At the same time, he confessed to having a pornography addiction.

Information that was found in the leaked user account data was reported to have listed Duggar’s full name and address, as well as some of his alleged sexual preferences, including that he was looking for ‘conventional sex, experimenting with sex toys, one-night stands, sharing fantasies, and sex talk’.

The Ashley Madison scandal came just over six years before Duggar was arrested and then convicted on charges of downloading child pornography; in May, he was jailed for 12 years by a judge who described the images and videos found on the father-of-seven’s computer as being among the ‘worst’ he had ever seen.

Brooks’ claims about Duggar appear to have been made in response to his conviction and sentencing, with the OnlyFans star stating in her video: ‘Just hearing everything that has gone down with him makes me absolutely sick.

‘I am so disgusted that I’ve been with him.’

She went on to allege that the former reality star – who rose to infamy while starring in the TLC series 19 Kids and Counting alongside his 17 siblings and his parents, Jim Bob and Michelle – paid her ‘a generous amount’ to have sex with him.

‘He paid me a generous, a really good amount of money, I’m not going to disclose that on here… But yeah, I slept with Josh Duggar,’ she concluded.

According to the gossip-based YouTube account that reposted Brooks’ video, the adult film star went on to share more alleged details about her so-called ‘meetups’ with Duggar in a follow-up video and in the comments section. 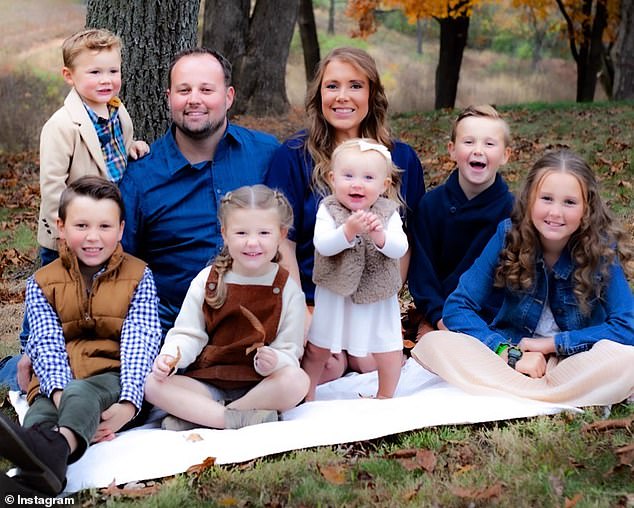 In 2015, Duggar was outed as an Ashley Madison user after the website was hacked and millions of users were exposed. He later admitted to using the site to cheat on his wife Anna 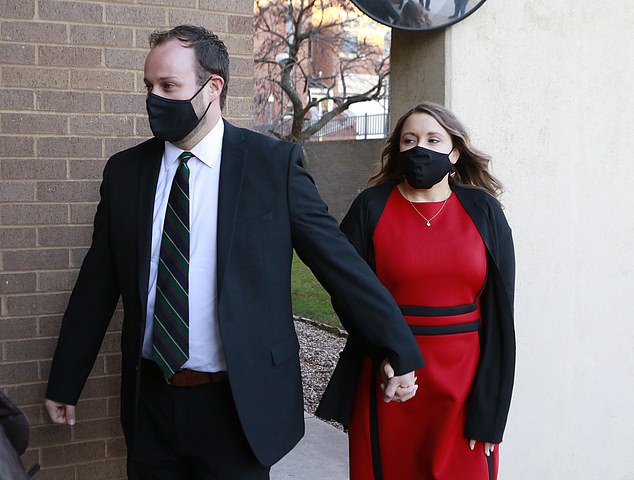 Brooks claimed that the convicted pedophile, seen arriving at court with wife Anna, 33, with whom he shares seven children, made her follow several ‘bizarre “rules”‘ for their ‘meetups’

In one screenshot that the YouTube user claims she took from one of Brooks’ posts, the OnlyFans star alleges that Duggar ‘had a bunch of weird “rules” she had to do before meetups’.

The YouTube user then summarized some of the ‘rules’ that she says Brooks listed while replying to comments from other TikTok users.

‘This woman, Karlie, answered questions from people [who] were curious as to why she continued with a person that was placing such bizarre requests for her, like putting her hair in pigtails, shaving everything on her body, [and] covering up all her tattoos,’ the YouTube user claims.

‘She also said that Josh picked out panties from the kids’ section for her to wear when they would meet up, which is so sick.

‘But she claims that she didn’t raise any red flags because, for her, being in the industry, it’s very common that people would make those requests [so] she didn’t think anything of it.’

DailyMail.com has contacted Brooks and a spokesperson for Duggar for comment.

In her lawsuit, Dillon claimed she met Duggar in March 2015 at a Philadelphia strip club where he allegedly paid $600 for lap dances from her.

Duggar’s wife Anna was six-months pregnant at the time and was at home with their three children.

Dillon dropped her case against Duggar in 2016 as part of a settlement reached out of court. 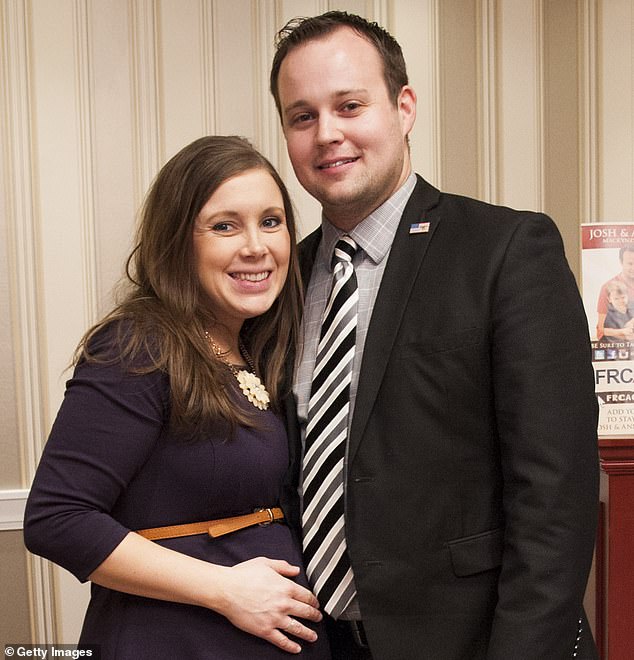 The OnlyFans star alleges that Duggar (seen with Anna in 2015) made her wear her hair in pigtails and cover her tattoos, and claims he bought her children’s underwear to wear

Speaking to DailyMailTV about the alleged ordeal in 2021, Dillon claimed that she repeatedly refused to let Duggar come back to her hotel room after meeting him at the strip club, but eventually agreed – which is when she says he turned on her.

‘There was no intimacy, it was, “Get naked now, get down on your knees,”‘ Dillon told DailyMailTV.

‘There was no warning, the back of my head was grabbed, his d**k was shoved into my throat and it was hard, hard, hard, with no remorse, no nothing. Almost as if the look in his eyes went black. It was terrifying.

‘I was thrown up on the bed, put in multiple different positions, his hands around my throat. At one point I tried pushing off and his entire body was on top of me with his penis in my mouth and I couldn’t breathe. I couldn’t even gasp for help.’ 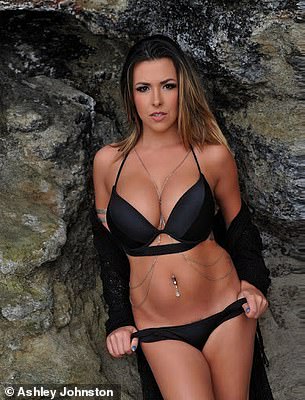 Johnston said she feared she might choke to death during the alleged rape.

‘It was just so intense. It was one of the worst encounters in my life I’ve had sexually,’ she said.

The latest claims about Duggar were posted on TikTok by Brooks just days before his legal team filed notice to appeal his child pornography conviction after he was sentenced to 12 years behind bars.

When sentencing Duggar, the judge in his case stated that he was giving the convicted pedophile a harsher sentence because of the sexual abuse that he had subjected his own sisters to when he was a teenager.

Duggar has been in custody since December when a federal jury found the 19 Kids and Counting alum guilty of possession and receipt of child pornography.

The possession charge was dropped at his sentencing.

‘The images were some of the worst that this court has ever encountered,’ Judge Brooks told Duggar, as his wife Anna sat a few yards behind him in the public gallery during his hearing.

The court heard in December how the dad-of-seven used the desktop computer at his car dealership to trawl the dark web for hundreds of warped films and photos.

One notorious movie, ‘Daisy’s Destruction’, featured the abuse and torture of an infant. Another sequence of images depicted a girl being whipped with a cat o’ nine tails, tied up and locked in a dog cage.