A former RAF electrical engineer, 95, has finally been honoured with her War Medal 73 years after she helped keep the planes flying during World War Two.

Vera Clachers, who was one of the first women to serve in the role, simply forgot she was entitled to the award and never applied for it.

It was not until her daughter, 58-year-old Lorraine MacLeod, contacted the Ministry of Defence earlier this year that she was handed the medal in a special ceremony. 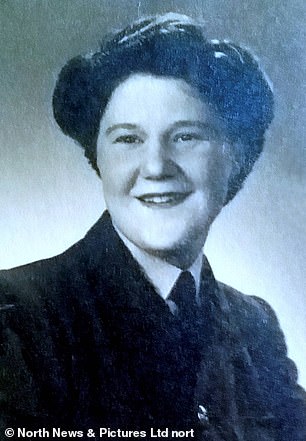 Vera Clachers was finally awarded a medal for her service in World War Two 73 years after her service. She is pictured left, at Edinburgh Castle after the medal ceremony on November 12; and right, wearing her RAF uniform in 1942

It is believed to be the longest period of time that has elapsed between the honour being awarded and it being received.

‘I was only doing my duty. My husband had been presented with his war medals before we met and I just thought nothing of it.

‘But now, I am very pleased to have received it. I am so happy and so proud. The presentation of the medal was a complete surprise to me.’

Mrs MacLeod, who is her mother’s carer, was prompted into action when the pair, from Edinburgh, attended an air show in Glasgow to mark the 70th Anniversary of World War Two.

Mrs Clachers pointed out at a plane and told her daughter she had worked on it – at which point Mrs McLeod realised how important her mother’s contribution to the war effort had been.

After speaking to other veterans, she discovered her mother was entitled to the War Medal and it was suggested she apply via the RAF Benevolent Fund.

And just two months later, on November 1, Mrs Clachers was finally presented with the medal during a reception at Edinburgh Castle.

Mrs McLeod arranged for her mother to be handed the medal by the youngest cadet at the ceremony – 17-year-old Samantha Terry.

‘I had to hide it from my mother for two weeks, it was so difficult. She did not have a clue until the cadet was standing in front of her with the medal,’ she said.

‘Samantha saluted mum and mum saluted back. That was the moment that moved every single person in the room. Everyone began clapping. I was very emotional.’ 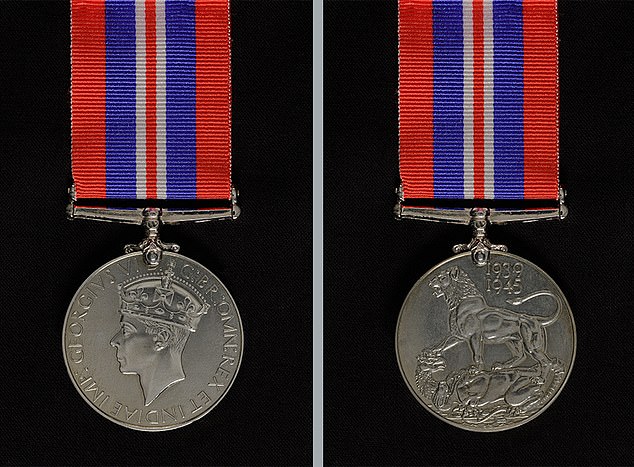 The War Medal was awarded to those who served at least 28 days between September 3, 1939 and September 2, 1945. Image undated

Air Vice-Marshal David Murray, Chief Executive at the RAF Benevolent Fund, said: ‘It was an absolute honour to be able to present Vera with her medal – an honour which was richly deserved even though it was decades late!

‘Vera’s humility is common among her generation of brave men and women who quietly answered their country’s call and did their duty without a second thought to the personal cost.

‘Which is why I am proud to lead a charity which ensures that that debt to society is repaid.

‘The RAF Benevolent Fund has stood side by side with RAF personnel, past and present, for almost 100 years, ensuring whenever they face hardship or suffering we are there with them.’

Mrs Clachers trained and worked at various RAF bases in England, including North Coates in Lincolnshire, to become an electrical engineer – one of just three or four females in the role at the time. 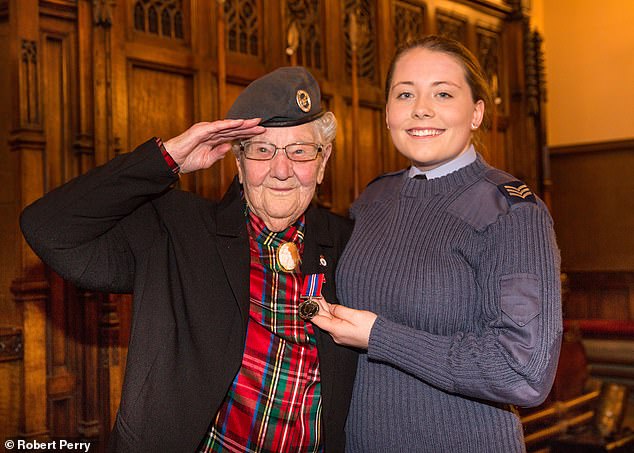 Mrs Clachers was handed her medal by the youngest cadet at the ceremony – 17-year-old Samantha Terry. They are pictured at Edinburgh Castle on November 11

She was posted out to Germany in 1948 to help with the post-war effort, working mainly on the bases in Varn and Sylt.

While based in Varn, Mrs Clachers met and fell in love with Thomas Clachers – a corporal and ‘leading aircraft man’. They were married in 1949.

Vera went on to work at Ethicon, the surgical suture company, and then a dressmakers in Edinburgh. Thomas passed away in 1991.

Mrs McLeod added: ‘I am so pleased with how this has all turned out. I just cannot believe it has taken 73 years. I am so happy and proud Mum’s contribution has been recognised.’