Alastair Gordon, 37, conned a woman he met through a dating site out of £12,000 and threatened she would be ‘got rid of’ by MI5

A former soldier who conned a woman he met through a dating site out of £12,000, then threatened she would be got rid of by MI5 if she reported him, has been hauled into court after only paying back £180 in two years.

Alastair Gordon, 37, has now been ordered to pay his victim back at £10 a fortnight – which will take 40 years.

The conman had been living with his wife and child at an army barracks when began an ‘intimate relationship’ with the woman after chatting her up on a dating site.

Gordon, who was a Royal Artillery gunner, claimed he was a retired army major who had served in Afghanistan and left due to an injury, but continued to work for the army as a fitness instructor.

He first persuaded his 38-year-old victim to hand over £6,000 by promising one of his family members would carry out cosmetic surgery on her stomach, but the surgery never happened.

And when he convinced her to sign up to a £6,000 credit agreement for a motorbike, he instead sold it and used the cash to pay off debts.

The woman did not suspect anything until Gordon went to Canada with the army and she received his £1,500 phone bill.

She called some of the numbers on the itemised bill and spoke to a number of Canadian women, who also believed they were in a relationship with Gordon.

His ‘hurt’ victim ended the love affair and demanded he return everything she had given him.

A court heard that he claimed he would pay her back but added that he was ‘in the process of moving to work for MI5 and as part of that he was going to be getting a new identity and then she would be ‘got rid of’.’

The woman, from Gosport, Hampshire, who does not want to be identified said this left her terrified.

Gordon, who earned £1,251 a month while in the army, admitted two charges of fraud in 2015 but denied the MI5 threat.

He was handed a two year jail term suspended for two years and 100 hours unpaid work.

He was also ordered to pay £12,491 compensation at £500 monthly installments but a hearing this week was told he had only paid back £180.

Gordon, now of Havant, Hampshire, claimed the case had ruined his life and that after being sacked by the army he had also been let go by a number of gyms following his attempts to forge a career as a personal trainer.

He even said he may only have two or three years left to live as he may have a lung condition similar to that which killed celebrity Keith Chegwin. 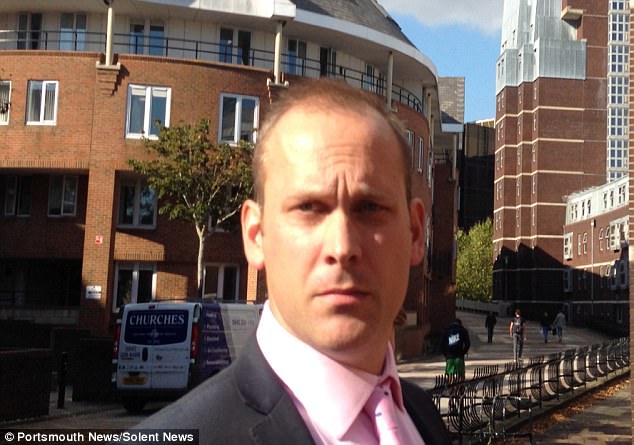 He said: ‘A few months ago I started struggling to breathe and have a notch on my lung that could be a Keith Chegwin-style condition.

‘I might only have two or three years left to live. This has not been confirmed by doctors but is something I’m aware of.’

A judge has now ordered Gordon pay his victim back at a rate of only £10 a fortnight.

The court heard the victim has now been contacted by a debt agency over the motorbike credit agreement.

After the case she said: ‘It’s a disappointing rate he has to pay the money back at – I think I’ll be dead before I get it all back as that will work out as about 40 years.’

Following the initial case, she had said: ‘It really hurt.

‘I had a good financial record and now I have a bad one because of his actions and that’s going to affect me for a long long time.

‘I won’t be able to obtain any credit. One of the most disgusting things is that he described himself as being an army major so I instantly trusted him.

‘We are all brought up to respect our armed forces and trust them. The majority are doing a great job and then we get someone like that who uses the army to gain for himself.’