Alex Salmond has been slammed for using a crowd funding campaign for his legal bills as an attempt to intimidate women who accused him of sexual harassment.

Scottish Labour said the ex-first minister was ‘independently wealthy’ and the only reason he called for cash from supporters was to send a ‘signal’ to the people who made complaints against him.

The Scottish Conservatives joined the attack, warning it was an ‘unprecedented’ situation for a politician to be asking for donations to challenge a Government he once led in court.

More than £70,000 has been pledged to Mr Salmond overnight after he sensationally quit the SNP to fight the claims against him, which he strenuously denies.

The ex-SNP leader, 63, is taking the Scottish Government to court over its handling of the claims against him. He asked supporters for £50,0000 to cover his judicial review at the Court of Session in Edinburgh. 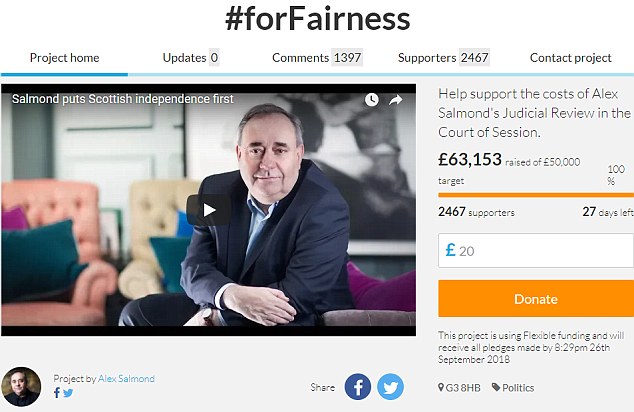 Scottish independence supporters have already raised more than £63,000 for Alex Salmond to cover his legal bills after he sensationally quit the SNP over groping claims 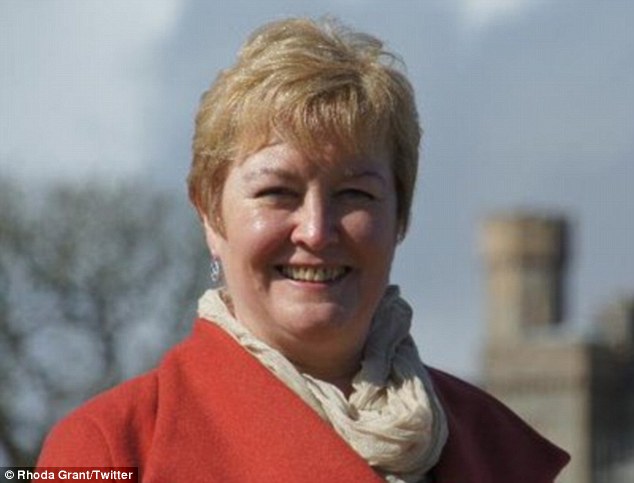 More than 2,700 supporters have already given more than £70,000, with more than a thousand people leaving comments supporting Mr Salmond.

Many claim it is a ‘smear campaign’ invented by the ‘Westminster establishment’ to undermine the independence cause.

First Minister Ms Sturgeon said last night she felt a ‘huge sadness about this whole situation’ but said she understood why her predecessor had chosen to step down.

She said: ‘That an independently wealthy man with his celebrity and political power is to raise legal fees through a crowdfunder for a case ultimately linked to sexual harassment is unbelievable.

‘It suggests that he is sending a signal to those who have made allegations that he has the upper hand.

‘Decent people will rightly be furious that he is to raise money to take the Scottish Government to court.

‘Alex Salmond is abusing his power, and dragging Scotland into the gutter.’

A Scottish Tory spokesman said: ‘Scotland now faces the incredible and unprecedented situation of its most famous former First Minister appealing to SNP supporters for cash to take legal action against the government he used to run.’

The claims about his conduct towards two staff members in 2013, while he was in office, have been handed to Police Scotland.

The former MP is crowdfunding for a court action against the Scottish Government to contest the complaints process activated against him.

One alleged incident is said to have happened late one evening at the First Minister’s official residence in Edinburgh, Bute House, in December 2013.

He is alleged to have told the complainant to move from a public room to the bedroom, repeatedly offered her alcohol – which she refused – and then told her to get into bed.

Mr Salmond then, reportedly, lay on top of her, kissed her, and touched her sexually on her breasts and bottom through her clothes.

He only stopped after she repeatedly asked him too, the Daily Record newspaper reported. Mr Salmond denies all the claims. 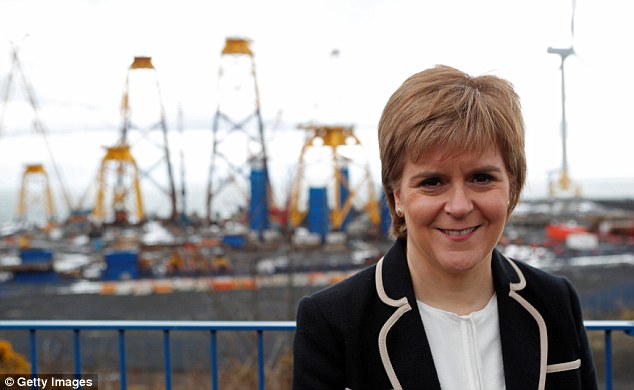 Mr Salmond, who strenuously denies the two sexual harrassment claims, said he was leaving the party to spare it from political attacks and to avoid his protege Nicola Sturgeon (file image) having to suspend him. 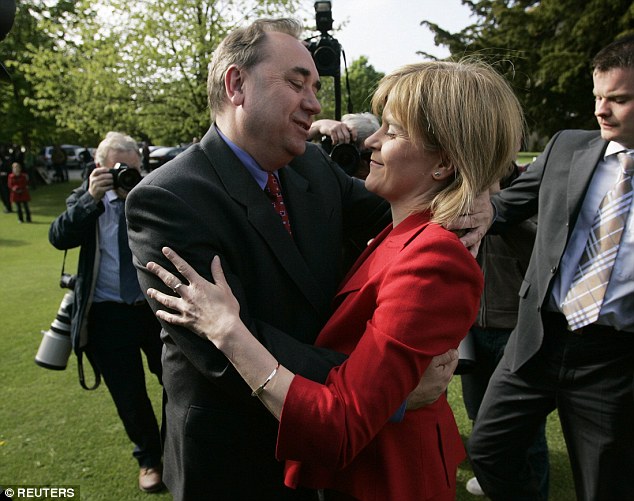 In his resignation statement last night he said: ‘I truly love the SNP and the wider independence movement in Scotland. They have been the defining commitment of my life.

‘But today I have written to the National Secretary of the Party resigning my membership.

‘I read carefully Nicola Sturgeon’s statement on Sunday and watched her television interview of a couple of days ago. She made it clear that the SNP have never received a single complaint about my personal conduct in my many decades of membership.

‘I refute these two complaints of harassment and I absolutely reject any suggestion of criminality.

‘Most of all I am conscious that if the Party felt forced into suspending me it would cause substantial internal division.

‘In my letter to the National Secretary I state that it is my absolute intention to reapply for SNP membership just as soon as I have had the opportunity to clear my name.’

‘In the meantime, I would urge no one else to relinquish their SNP membership,’ he added.

He also wrote to Scotland’s top civil servant calling for an inquiry into how sexual harassment allegations against him were made public. 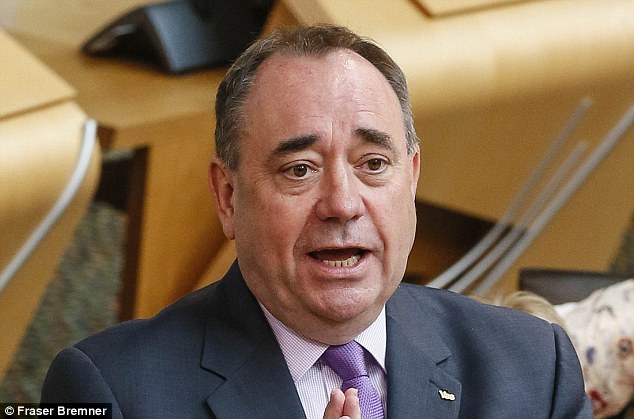 In a statement, Mr Salmond (pictured), who quit as first minister in 2014, said he was leaving the party to avoid ‘substantial internal division’ in the SNP

Last night Nicola Sturgeon said in a statement: ‘I feel a huge sadness about this whole situation.

‘Alex has been my friend and mentor for almost 30 years and his contribution to the SNP and the independence movement speaks for itself.

‘While the decision to resign has been Alex’s alone, I understand why he has chosen to separate the current questions he is facing from the day to day business of the SNP and the ongoing campaign for independence.’

In the statement posted on Twitter, the SNP leader continued: ‘I know party members will be upset by this news, just as I am. I also know there are many questions that can only be answered in the fullness of time. It is important now that any legal processes are allowed to take their course.’

The Government previously said its investigation into two complaints against Mr Salmond has been ‘entirely confidential throughout’.

Leslie Evans, Permanent Secretary at the Scottish Government, said the complaints were raised in January and Mr Salmond was notified in March about an investigation.

The Scottish Government this week confirmed there are no recorded complaints about Mr Salmond from before January this year.

Mr Salmond had first become SNP leader in 1990, and stayed in the role for 10 years, during which time the devolved Scottish Parliament was established.

After returning to the role he was elected First Minister in 2007 in the SNP’s first ever Holyrood election victory.

He stepped down seven years later in the wake of the 2014 independence referendum defeat.

After serving as a Westminster MP from 1987 to 2010, he returned to the House of Commons in the SNP’s landslide at the 2015 general election.

But he lost the Gordon seat to the Conservatives at last year’s snap election.

‘I have been a member of the Scottish National Party for 45 years, 20 of them as party leader and seven as First Minister of Scotland. I hope I have done the party and the broader cause of independence some service.

‘Apart from a political spat back in the 1980s, that has been a period of continuous membership. I truly love the SNP and the wider independence movement in Scotland.

‘They have been the defining commitment of my life. But today I have written to the National Secretary of the party resigning my membership.

‘I read carefully Nicola Sturgeon’s statement on Sunday and watched her television interview of a couple of days ago. She made it clear that the SNP have never received a single complaint about my personal conduct in my many decades of membership.

‘And the Scottish Government have confirmed that they did not have any such complaint before this January, more than three years after I left office as first minister.

‘That is the record of 30 years of public service.

‘So let me be clear again. I refute these two complaints of harassment and I absolutely reject any suggestion of criminality.

‘I believe that all such issues must be treated seriously, confidentially and through a fair process. In this case confidentiality has been broken greatly to my detriment and in a way which puts at serious risk the anonymity of both complainants.

‘It urgently needs to be established who breached that duty of confidence and why.

‘It seems obvious that Nicola feels under pressure from other political parties to suspend me from SNP membership, given recent party precedents.

‘For my part I have always thought it a very poor idea to suspend any party member on the basis of complaints and allegations. Innocent until proven guilty is central to our concept of justice.

‘However, I did not come into politics to facilitate opposition attacks on the SNP and, with Parliament returning next week, I have tendered my resignation to remove this line of opposition attack.

‘Most of all I am conscious that if the party felt forced into suspending me it would cause substantial internal division.

‘In my letter to the National Secretary I state that it is my absolute intention to reapply for SNP membership just as soon as I have had the opportunity to clear my name. I hope that is by the end of this year.

‘In the meantime I would urge no one else to relinquish their SNP membership.

‘My entire focus for the next few weeks is preparing for Judicial Review, against the Permanent Secretary to the Scottish Government, the initial stages of which began yesterday.

‘My intention is to secure fairness because that is necessary to clear my name. I am enormously grateful for the messages of support and encouragement I have received, including from people of other political persuasions.

‘I can assure them all that I will keep on going.

‘The costs of a Judicial Review in the highest court in the land are huge. Many have asked how they can help directly. Therefore I have established a crowd-funder to assist with costs.

‘All sums received will contribute exclusively to progressing the Judicial Review and any money left over will be used to support good causes in Scotland and beyond.

‘Finally, I will continue to serve the independence movement in whatever role and whatever capacity I can.

‘It is a rare thing to be devoted to a cause more important than any individual, it is a precious thing to cherish it and my intention now – as it has always been -is to protect and sustain that cause.’