Ex-servicemen win payouts of more than £10million over Afghanistan injuries

Three former servicemen have today been awarded more than £10 million in compensation each after ‘inadequate’ Ministry Of Defence vehicles failed to protect them from improvised explosives.

The veterans all suffered serious injuries when roadside improvised explosive devices (IEDs) hit their ‘inadequately-armoured’ vehicles in Afghanistan between 2008 and 2009.

Hilary Meredith Solicitors announced that it had secured the settlements for the veterans, with each of the three claimants receiving a ‘seven-figure’ sum.

They had been travelling in Pinzgauer troop carriers, nicknamed ‘coffins on wheels’ by UK troops because they provided inadequate blast protection from roadside explosives.

Rows upon row of Pinzgauer vehicles used and needed by British forces fighting in Afghanistan, pictured here parked at an M.O.D. storage area outside Ashchurch near Tewkesbury in Gloucestershire

Simon Quinn, partner and head of military at Hilary Meredith Solicitors, said: ‘After a hard-fought and lengthy battle for compensation in which there were very real risks of failure, particularly regarding combat immunity, it has been a privilege to represent these claimants who have shown resilience, perseverance and sheer grit in their determination to achieve justice and hold the Ministry of Defence (MoD) to account.

‘The seven-figure settlements we have reached in each case reflect the serious nature of the claimants’ injuries together with their subsequent medical discharge from the armed forces.

‘It is to be hoped that in any future conflict our troops will be provided with the best equipment available before death or serious injury occurs.’

A fleet of 166 Pinzgauer troop carriers, manufactured by BAE Systems, was introduced into combat operations in Afghanistan by the MoD in April 2007, Hilary Meredith said.

It said that a Royal Marine serving with 42 Commando suffered multiple severe injuries and fractures when the Pinzgauer Vector in which he was a front-seat passenger struck an IED in October 2008.

In August the following year, a Pinzgauer truck struck an IED, causing the driver to suffer an above-knee amputation of his right leg, and a Territorial Reserve officer in the front passenger seat to suffer severe psychological and physical injuries.

Hilary Meredith said in each case the claimants alleged that their injuries would have been avoided had they been travelling in ‘suitably-armoured vehicles’. 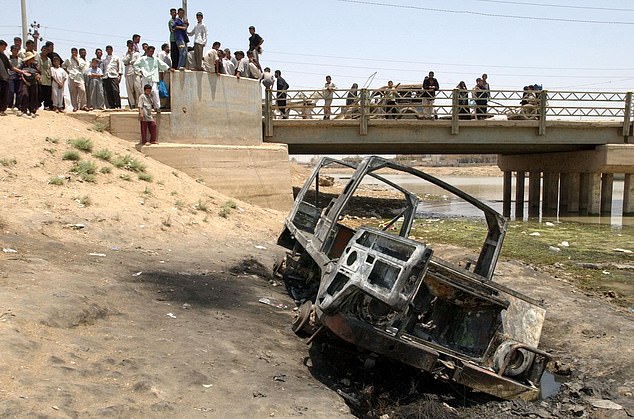 A British Army Pinzgauer troop carrier, burnt out by Iraqis after it was abandoned by fleeing British soldiers in Al Majar Al Kabir, 290 kms southeast of Baghdad, Iraq, June 25, 2003

Proceedings were launched against the MoD on the basis that the decision to supply the Pinzgauer vehicles to troops serving in Afghanistan was negligent, the law firm said.

But the MoD argued that, due to combat immunity, no duty of care was owed in circumstances where the injuries occurred during combat operations, it added.

However, after the Supreme Court decided not to strike out similar claims through reasoning that procurement decisions had not been taken in the heat of battle and might not fall within the scope of the combat immunity defence, the MoD agreed in 2016 that it would settle the claims relating to the Pinzgauer vehicles, without any admission of liability, Hilary Meredith said.

Following exchange of medical evidence, the awards were negotiated on behalf of each claimant at meetings held in Liverpool and London in December 2019 and January 2020, the law firm added.