Former Trump campaign adviser Carter Page has claimed that the FBI ruined his life by putting him under surveillance in a new interview.

Page has been at the center of ongoing investigations into Russian meddling and collusion with the Trump campaign in 2016 because of his alleged ties to the Kremlin.

The 46-year-old investment banker has now blamed the FBI’s surveillance for driving his girlfriend away and bringing his consulting business to grinding halt in an interview with the New York Post published Saturday.

Page was forced to step down from his role as foreign policy adviser to Trump in the summer of 2016 after it was revealed that he had links to Russia and Vladimir Putin.

Shortly after he resigned the FBI was granted a warrant to surveil Page’s communications based on suspicion that he had been contracted as a spy for the Russian government.

This week Page told the Post that he believes he had been spied on by paid FBI informant professor Stefan Halper.

He said Halper had ‘portrayed himself as someone offering help’ to Page and the campaign.

‘[He] expressed sympathy about what I had been put through with the defamation and smear campaign led by the DNC and the Clinton campaign,’ Page added.

Page also noted that Halper had contacted him in early July 2016, weeks before the FBI says the investigation was officially opened.

If the FBI was using Halper as an informant at the time, it raises the possibility that the investigation was politically motivated.

Trump himself has made similar allegations, referring to the scandal as ‘Spygate’.

‘It is particularly appropriate given recent developments,’ Page told the Post.

‘I wouldn’t be surprised if it turned out to be a trap.’ 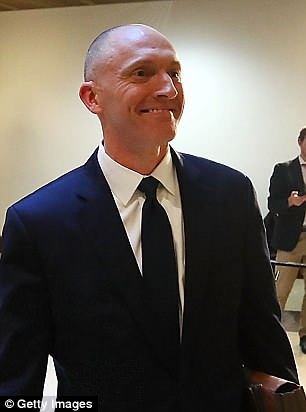 Page said he believes he was spied on by American professor Stefan Halper during the summer of 2016. Halper, right, was identified as  an FBI informant in news reports last week

Several months later Page was named in a memo by Republicans on the House Intelligence Committee accusing the Justice Department of abusing its power in the Russia investigation.

The four-page memo contended that the FBI relied excessively on information from an ex-British spy when applying for the warrant on Page.

That spy, former MI6 operative Christopher Steele, had alleged Page took a trip to Moscow in July 2016, based on opposition research that was funded by Democrats.

During that trip Page was said to have met with a senior Kremlin official to discuss ways to help Trump and hurt Hillary Clinton.

In the interview published Saturday Page claims that the media circus surrounding the the memo caused his girlfriend at the time to ‘freak out’.

‘Talking with her later in the evening after dinner, she told me that she didn’t want me staying there anymore, and that our relationship was over,’ he said.

‘So late that night I booked a last-minute hotel reservation as part of this early chapter of the redefinition of my life.’

In the wake of the breakup and the decline of his consulting business Page has been very vocal about his experience, claiming that the FBI had no basis to spy on him.

He even went as far as to say that the scandal was even worse than Watergate.

‘The crimes that have already been committed against President Trump, myself and the entire Trump movement are much worse,’ he said.

Trump made similar remarks earlier this week, tweeting that Democrats had planted spies ‘all over my campaign’.

His claims gained new momentum after Halper was identified as the FBI’s informant last week.