Ex-West Bromwich Albion youth footballer, 26, who raped a woman he met on Tinder is jailed

Ex-West Bromwich Albion youth footballer, 26, who raped a woman in car park after meeting her on Tinder is jailed for five years

Akil Grier, 26, pictured, has been jailed for five years after raping a woman he met on Tinder in a Worcester car park in 2016

A former West Bromwich Albion youth team footballer has been jailed for raping a woman he met on Tinder in a car park.

Personal trainer Akil Grier, 26, was sentenced to five years in prison following the attack on a young mother on March 16, 2016.

Grier raped his victim after meeting her on the dating app Tinder and travelling from his home in Sutton Coldfield to Worcester.

He left West Brom in 2012 before playing for a host of non-league clubs including Halesowen Town, Stourbridge, Coleshill Town, Radcliffe.

Grier was most recently on the books of Newcastle Town but in 2011-12 won three senior caps for Saint Kitts and Nevis, including two appearances for the Caribbean nation in World Cup qualifiers.

The attack on the single mother happened in the car park of a vets in Worcester, at around 11pm after the pair, who had been speaking for a month, went on a first date to Nando’s.

Following Grier’s conviction at Birmingham Crown Court, the victim said: ‘What I want from all of this is to help others. 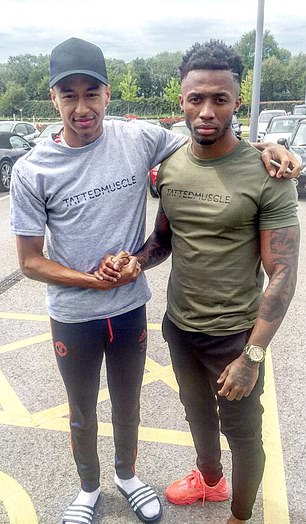 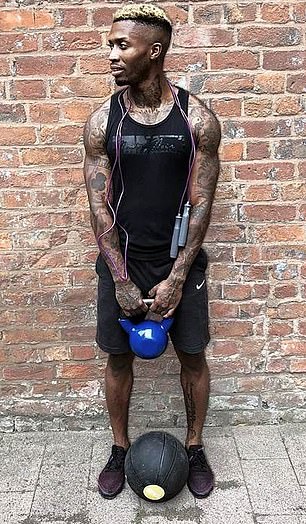 Ex-West Bromwich Albion youth player Grier, pictured right and left with Manchester United player Jesse Lingard, had been speaking to his victim for a month before they met in Worcester

‘It has dragged on for so long but my message to others is to never give up. It’s a long, hard road and a lot of interviews and going to court but never stop.

‘We spoke on Tinder and, this one time, he became really aggressive. He came across as really arrogant and that night he flipped and attacked me.’

The rape victim, who cannot be named, spoke out after Grier was sentenced on January 24.

She said: ‘I get flashbacks every day. It’s worse of a night. I can’t sleep. I always ask myself what I would have done differently.

‘I can’t get it out of my head. It’s scarred me for life. I just don’t feel safe out in the street now, even knowing he’s in jail.

‘It’s left me petrified and I’m hoping I can get back to being myself. I’m constantly looking over my shoulder.’

The pair hadn’t met in person before and, after chatting via Tinder for a month, the woman has issued a warning to others about dating sites.

She said: ‘Girls who are thinking of meeting strangers; make sure it’s in public.

‘Don’t get into cars for lifts until you’re sure. Make sure you’re in busy places. I will never use [Tinder] again.’

He was placed on the sex offenders’ register for 10 years and ordered to pay a victim surcharge of £120.