As her ex-husband, Michelin-starred chef Albert Roux, knows only too well, Cheryl Roux is nobody’s fool. When they first met, the chef had seven other girlfriends — all of whom he jettisoned after Cheryl declared she would not be part of his ‘harem’.

A successful businesswoman with an estimated worth of £30 million, blonde and elegant Cheryl may have been 21 years Albert’s junior when she agreed to marry him, but she was no trophy wife.

Furious to discover, seven years into their marriage, that he was having an affair with a cloakroom girl at one of his restaurants, she divorced him. Few, it seems, pull the wool over Cheryl’s eyes and get away with it.

And so it was with a sense of utter disbelief that she found herself the victim of a cruel and terrifying scam.

Standing outside her Belgravia mews house this summer, Cheryl was horrified when the door was opened by a total stranger.

Cheryl Roux, 61, pictured in one of her bedrooms has been conned out of her Belgravia home after she was duped under the guise of a fake letting agency who let out the rooms to holidaymakers

Cheryl, who had been renting out the top two floors of her home for five years, had fallen prey to fraudsters. She had lost her beloved home of 18 years.

Soon afterwards, those who had defrauded Cheryl changed the locks on the front door to her £5.5 million property.

Worse still, despite the house being invaded, sublet and run into the ground by conmen, the police insist they can do almost nothing. Two months on, 61-year-old Cheryl’s living nightmare appears to be no closer to ending.

‘There has been a string of 40 strangers living in my home for nine weeks. I haven’t been able to spend a night there in all that time,’ says Cheryl.

‘The police have advised that it’s too dangerous for me to be there.

‘I wake in the early hours fretting, trying to figure out what I can do, and am struggling to get more than four hours’ sleep a night.

‘If I wasn’t living through this, I would struggle to believe what has happened.’ 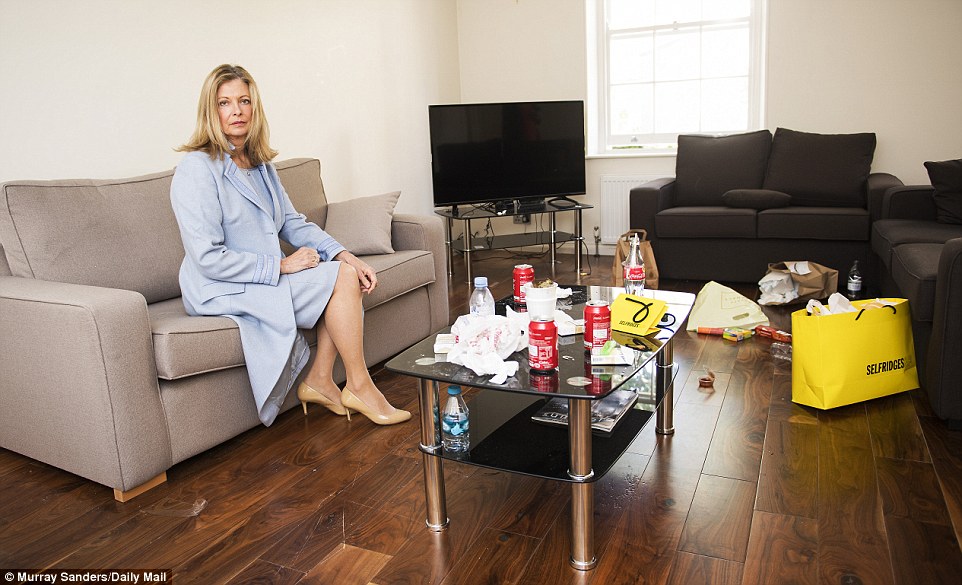 Nor can she comprehend the fact that she is powerless to act. ‘If I want to stay on the right side of the law, there is nothing I can do to reclaim my home,’ she says.

A chilling one-off? Not so, says Cheryl. She understands that the fraudsters who duped her — under the guise of a fake letting agency — have a ‘portfolio’ of up to 30 properties on their books.

‘I am fortunate to be in a position to be able to weather this financially, but it could happen to anyone who decides to rent out their home, or even just a room within it.’

Cheryl signed a two-year tenancy agreement to let the two top floors of her three-storey house on June 27 with a man who had been introduced to her by the bogus agency.

Within days, the fraudsters had put ‘tacky’ furniture — including four double and two single beds — into the previously unfurnished apartment and listed it on holiday let services Airbnb and Booking.com.

They charged £5,500 a week to innocent holidaymakers, who booked their stays oblivious to the web of deception they were entering.

So how could this happen to a business-savvy woman like Cheryl, who made millions in the hospitality industry as well as a large portfolio of rental properties? 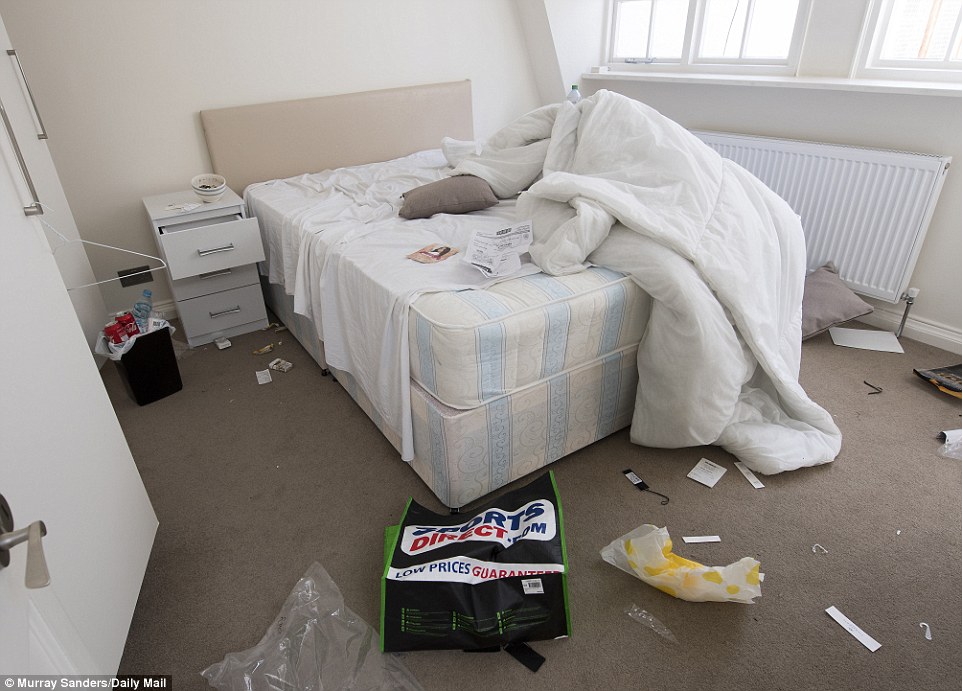 The latest occupants were eight men who left the apartment in a shocking state. The living area was littered with takeaway food cartons and drinks cans, while a stench of rotting waste permeated the flat

The heiress from Zimbabwe moved to London in 1989 and became a familiar figure in the society pages of newspapers and magazines when she married Albert Roux.

The restaurateur, now 82, responsible for training chefs including Gordon Ramsay and Marco Pierre White, spent seven months wooing her with flowers and ‘unloading’ his other girlfriends before she married him in 2006.

Their divorce eight years later was protracted and acrimonious, with allegations that Roux was keen to secure a substantial share of Cheryl’s wealth.

Like any astute businesswoman, Cheryl realised the market value of her Belgravia home, within walking distance of Harrods and Hyde Park, and decided to rent it out in 2013.

She kept the ground floor — which has a separate entrance, and consists of a living room, bedroom and office, as well as a kitchen and bathroom — for herself as a pied-a-terre for when she was in town.

Things could not have gone more smoothly with a couple who were the perfect tenants for four years.

However, when they moved out in May, Cheryl advertised the property through various local estate agents. She was not too surprised when a man calling himself Anthony got in touch to say he had the perfect tenant.

‘He asked if I would consider appointing them as agents, so I Googled him, came across a website where everything seemed to be legitimate, and a Companies House listing, and said I would,’ recalls Cheryl. 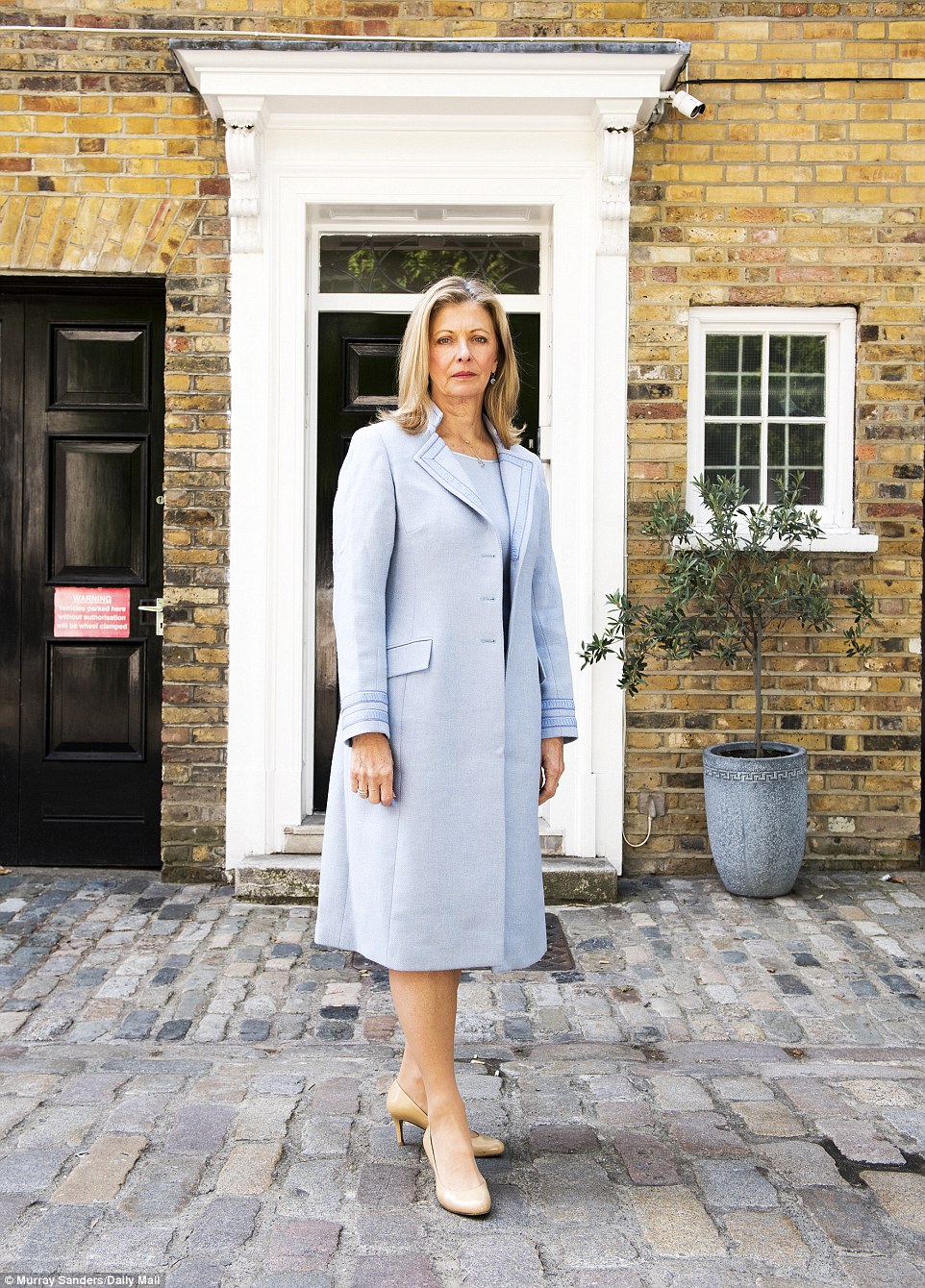 ‘Shortly afterwards I met Anthony and he provided me with a passport and references for a man called Ali, though I don’t believe either of these men gave their real names.’

Alarm bells first began to ring after Cheryl handed over keys to her property in late June, but the deposit and first month’s rent didn’t arrive in her bank account.

When she queried this with the agency, they produced a ‘deposit slip’ that appeared to show the money had been transferred from their account into hers.

Still oblivious to the scam at this stage, Cheryl contacted her bank complaining about its clearing system and queried where her money had got to.

At this point she headed off on a trip to Australia, from where she kept calling the agency demanding to know where her money was. Within two weeks, Anthony stopped answering Cheryl’s calls.

When she returned to London in mid-July, a neighbour asked if she was aware that ‘half a dozen kids’ were living in her house, despite the tenancy agreement clearly stating that no children are allowed in the property.

‘I knocked on the door and asked for Ali, but the Indian lady who answered had no idea who he was,’ says Cheryl. ‘They said they had paid £5,500 for a week-long stay, for four adults and six children, through Booking.com.

‘It dawned on me that I had fallen for a scam, the sort of thing you read about happening to other people, but never imagine will affect you.

‘My immediate response was to call the police to evict them, but I felt bad kicking these two families out on to the street when they had paid for somewhere to stay.’

But it would not be a simple case of enlisting the help of police officers to get rid of these strangers from her home.

Even when the families left a couple of days later, and Cheryl discovered someone had opened all her mail, she was advised that she would be breaking the law by altering the locks to her own home to prevent anyone else getting in. 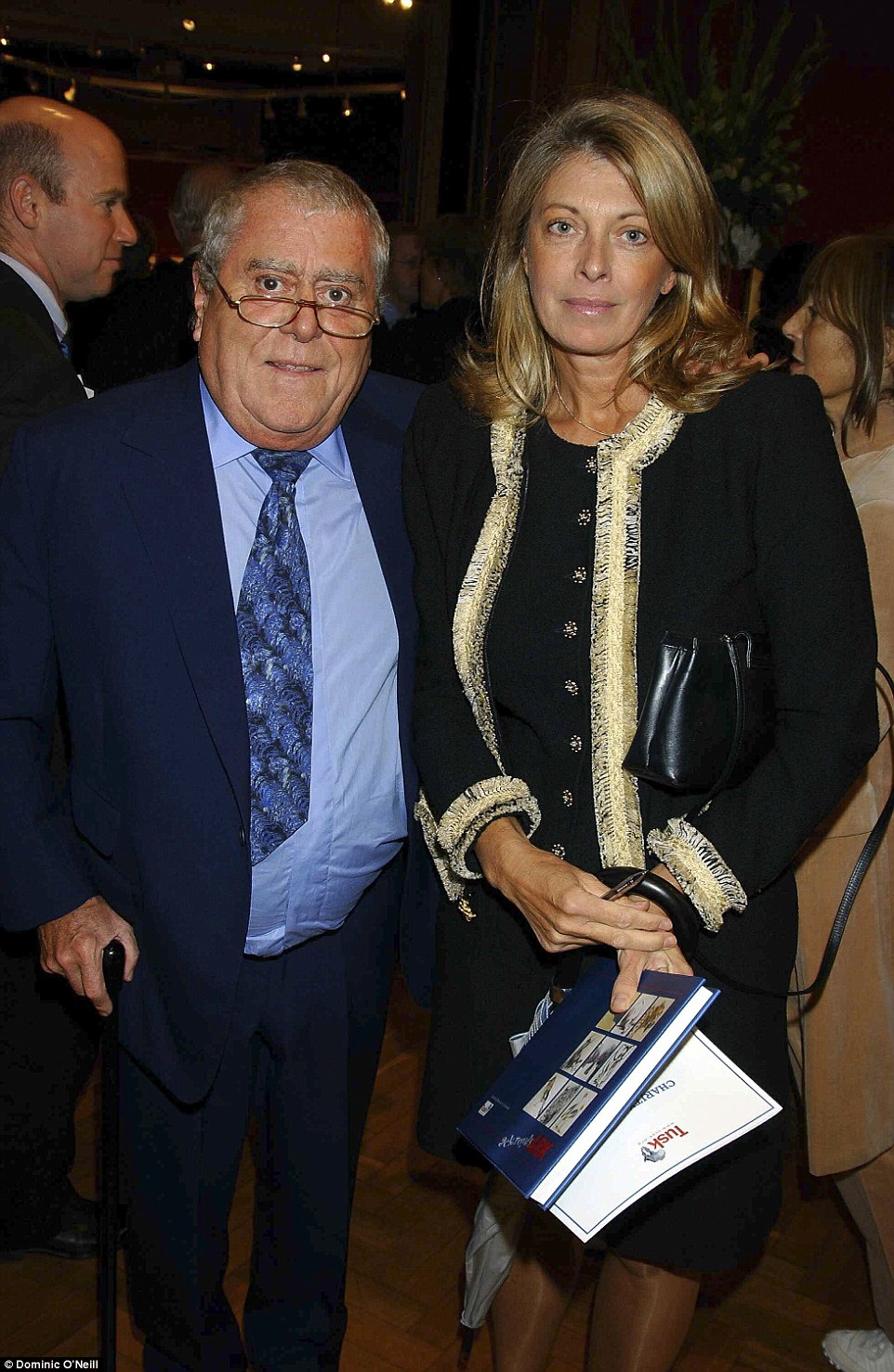 Cheryl was once married to Michelin-starred chef Albert Roux, who trained chefs including Gordon Ramsay and Marco Pierre White, before they divorced after he had an affair

‘It’s every landlord’s worst nightmare,’ says Cheryl. ‘It takes six months to get rid of tenants once you have an agreement with them.

‘They have to be in a couple of months’ rent arrears before you can even begin action, which will take several more months to be decided by the civil courts.

The fact they were sub-letting and breaching the terms of the tenancy agreement is not even reasonable grounds to evict.

‘So these con artists can have my property for six months, free of charge, and make well over £100,000 in the process.’

Adding insult to injury, as the tenants did not transfer the gas and electricity supplies into their names, the utility companies are threatening legal action against Cheryl as the property owner.

After the Indian family moved out, Cheryl demanded a meeting with the men she knew as Anthony and Ali.

But instead of apologising for not paying her and breaching the terms of the tenancy, they brazenly announced they were moving in another group of holidaymakers.

After being warned not to change the locks on her home, later that day Cheryl had to stand by and watch as two men she didn’t know did exactly that, barring her from entry.

Only once have the police taken action — ordering the tenants to clear out their belongings and leave and handing a key to the new lock to Cheryl.

A spokesman for the Metropolitan Police says: ‘Once a property is let and there is a contract between two parties, it is a matter for the civil courts if a dispute arises.’

Cheryl’s solicitor, Chris Sharpe of The Landlord Group, has issued a notice stating that she wants her property back on ‘mandatory grounds’ (where the tenant is guilty of anti-social behaviour).

Even so, she has been warned that she is unlikely to be able to reclaim her home before Christmas.

The latest occupants were eight men who left the apartment in a shocking state. The living area was littered with takeaway food cartons and drinks cans, while a stench of rotting waste permeated the flat.

‘God knows what they have been up to,’ says Cheryl, shuddering. ‘I’m at my wits’ end knowing how powerless I am to do anything without breaking the law. 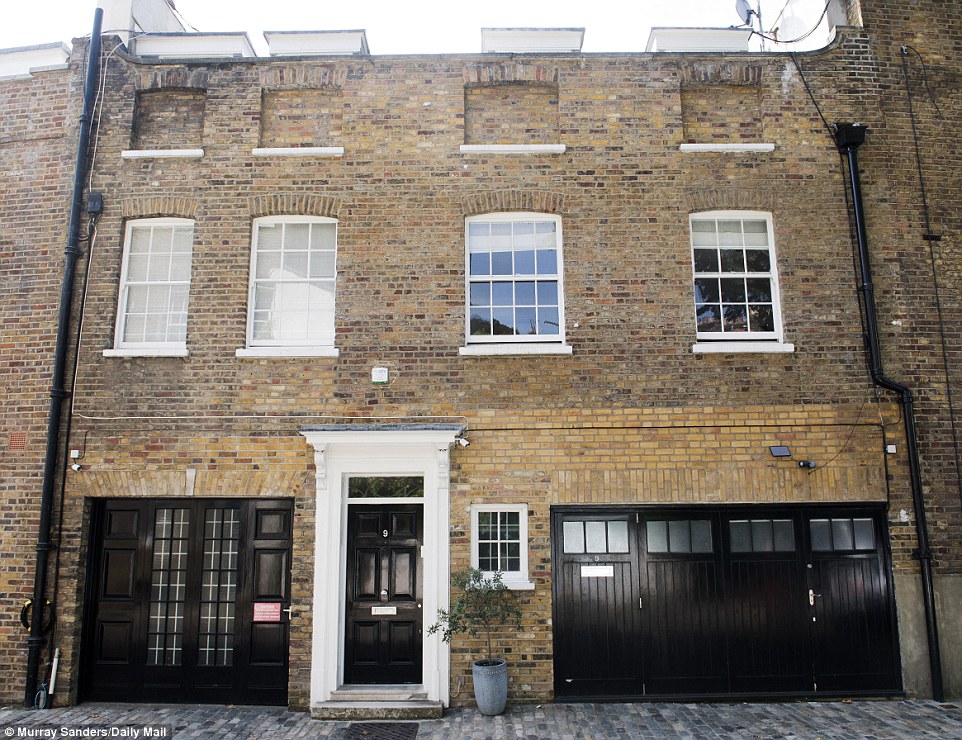 ‘A buy-to-let landlord who had less experience in business than me could be broken by an ordeal like this. The rental world needs reforming to prevent this sort of criminal behaviour.’

While the apartment has been empty for a couple of days, more ‘tenants’ could arrive at any moment, and Cheryl has no power to prevent them moving in.

The landlord at the Grenadier pub, opposite Cheryl’s house in Wilton Row, has been keeping an eye on comings and goings for her and challenging new arrivals. Other than that, there is little he, or any of her neighbours, can do.

While most of Cheryl’s anger is directed at those who conned their way into her home, she reserves some of her ire for the holiday rental websites which, she says, didn’t investigate the listings sufficiently and took a month to respond to her repeated requests to remove her home from their sites.

A spokesperson for Booking.com says: ‘We work to ensure that all information is displayed clearly and accurately to anyone searching on our site and if our customers ever have questions, our customer service team is available 24/7.’

Airbnb says no reservations for this property were made through its site and that the listing has been removed.

Cold comfort for Cheryl, who says that, once the house is back in her hands, she plans to sell it.

‘I have so many fond memories from my 18 years there — entertaining, having friends and family come to stay — but it’s all been tainted by this experience,’ says Cheryl.

‘What has happened is constantly on my mind. It’s impossible to imagine being happy there again.’