The wife of the VIP paedophile ring ‘fantasist’ known as Nick has given evidence for the first time at his trial, telling the court he once told her he had been abused by his stepfather as a child.

Dawn Beech, speaking from behind a screen, was married to the 51-year-old for 22 years before they divorced in 2012, which is around the time he made his first allegations about a paedophile ring involving 20 high-profile men in the 1970s.

She recounted how, in 1990, Beech spoke about being sexually abused at the hands of his stepfather, claiming he would come into his room and molest him when his mother was downstairs watching TV. 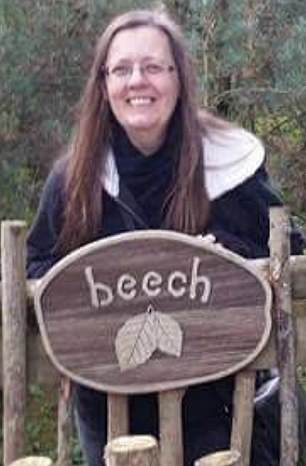 Dawn Beech (right), who was married to the alleged fantasist Carl Beech (left) for 22 years, has given evidence for the first time at his trial at Newcastle Crown Court

Mrs Beech, 49, said the claims were made in a letter he had written to his mother in the third year of nursing training, around 1990.

‘It was about some sexual abuse he had suffered as a child. He said his step-father Ray Beech was responsible,’ she told Newcastle Crown Court.

‘He showed me the letter, I can’t remember exactly what it said but it basically said his step father had abused him as a child.

‘At the time Carl was on the psychiatric placement and I think that had brought out his feelings about what had happened to him as a child.

‘He told me that the abuse would take place at home when his mother would be downstairs watching the telly and his step father would come up to his bedroom and abuse him and he thought his mother knew what was going on so thought it was OK.’

Addressing jurors at his trial today, Mr Justice James Goss told jurors to discount the fact that his former wife was speaking from behind a screen.

‘This measure is now very common in the Crown Court, it is to ensure they are able to give their best evidence unaffected by stresses, so ignore the screens.’ he said. ‘You must not hold it against the defendant or his defence.’

Mrs Beech married her husband in Hertfordshire on May 2, 1992, four years after they met while training to be nurses at the Royal Berkshire Hospital in Reading.

‘I was training to be a registered general nurse, Carl took the same course as me,’ she told the court.

‘We met socially I was sitting in one of the kitchens of the nurses home and Carl’s room was opposite the kitchen, Carl came out and I suppose just started chatting, that’s how it was.

Mrs Beech told the court he appeared to have no fear of swimming or flying on aircraft when they went on their honeymoon.

Beech had claimed to police that he had a fear of water and swimming because he was raped in a swimming pool my members of The Group – including Leon Brittan.

She also said he never complained of having physical injuries on his body – despite claiming to have been burnt and bitten by snakes placed on his body by his boyhood torturers.

The court has previously heard that in 2011 the couple had household debts of £70,000 and were running up overdraft charges most months.

They divorced a year later after having one son together, who was living with his father at the time Northumbria police raided the family home in Gloucester to arrest him in 2016. 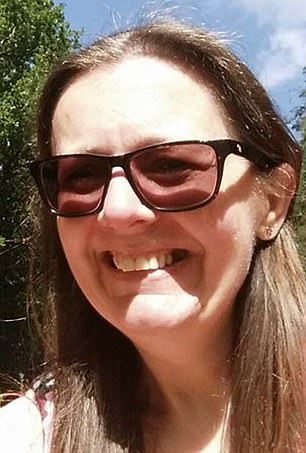 Mrs Beech (pictured) married her husband in Hertfordshire on May 2, 1992, four years after they met while training to be nurses at the Royal Berkshire Hospital in Reading

Beech told the court how she broke the news to her husband she was leaving him.

‘It was November 14th 2009. I had not been particularly happy that day and we sat down in the living room after our son had gone to bed,’ he said.

‘I said to Carl ‘I do not love you any more as a wife should love her husband. I think our marriage is dead and I think we should go our separate ways’.’

She said it was only after they agreed to split that she realised the scale of their debts.

There had been other strains on the marriage – including Beech’s hygiene.

She replied: ‘It was not good, I had always noticed that but noticed it more when we moved in together. I did confront him about it a few years later.’

They went to Relate for marriage counselling in 2004, two years after their son was born.

Mrs Beech said that in the counselling sessions the subject of Beech’s claimed abuse by his step-father Ray Beech was raised.

The couple were given coping strategies by their counsellor and no other abuser other than soldier Major Beech was mentioned.

They split in April 2012 and on the day the divorce came through – despite their debts – Beech flew on holiday to Los Angeles with their son, who was then aged 10.

Mrs Beech said the holiday was with her agreement but added: ‘It was the day our divorce came through, I think he was flying out as I was opening my letter.’

Prosecutors allege Beech made a fraudulent claim to the Criminal Injuries Compensation Authority to haul himself out of financial problems.

He was eventually given £22,000 compensation for the ‘abuse’ he suffering over a prolonged period as a young boy at the hands of men he called The Group.

Despite his £45,000 a year job with the NHS’s Care Quality Commission Beech was unable to keep up monthly repayments on a £30,400 motor home and it was repossessed.

Even when it was sold off it left Beech owing £6,000 which he arranged to pay off in £100 a month instalments.

Financial Investigator Nolan Robinson launched an investigation for police which stretched back to 2011 and went up to April 2016.

Despite redundancy payment and the CICA payment – a total of £41,425 – Mr Robinson said Beech had a ‘zero balance’ at the beginning of his analysis and had returned to that by the end of it.

Previously the trial has been told Beech falsely claimed he had been raped by senior army officers and the disgraced television presenter Jimmy Savile.

He told the Metropolitan Police that around 15 men attended weekly abuse parties all over the South of England, including the late former Tory PM Ted Heath’s yacht, exclusive clubs and Dolphin Square.

Beech also said former MI5 and MI6 heads tortured him by tipping spiders over him, gave him electric shocks and threw darts at him.

His claims led to the Met Police launching Operation Midland, which cost £2 million which was dropped after 16 months without anyone being charged.

It was then that Northumbria Police were called in to investigate Beech and unpicked his alleged web of deceit, the court has heard.

He denies 12 charges of perverting justice and one of fraud by falsely claiming £22,000 criminal injuries compensation.

When the Met asked Northumbria Police to investigate Beech in 2016, cops raided the rented three-bedroom house in Gloucester where he lived with his son.

They discovered on the drive a new £34,000 white Ford Mustang convertible which was bought with the compensation cash he received, it is alleged.

Beech later fled to Sweden but was tracked down and extradited back to the UK to face justice.