Disgraced Today Show host Matt Lauer was seen out in the Hampton’s with his daughter Romy for her 18th birthday Saturday, just a day after excerpts from the memoir of Lauer’s longtime co-host Katie Couric revealed she had heard ‘whispers’ about his inappropriate conduct with women at NBC.

Lauer was seen out with Romy, a friend, and Lauer’s longtime friend-turned-girlfriend Shamin Abas.

The group went to Italian restaurant Tutto Ill Giorno, and afterward had ice cream at Yummylicious in Sag Harbor.

There was no sign of Romy’s mother, Annette Roque, who divorced from Lauer in 2017 after the sexual allegations against him became public and he was fired from the Today Show.

Fired Today Show host Matt Lauer was seen out with his daughter Romy in the Hamptons on Saturday for her 18th birthday, a day after excerpts from longtime co-host Katie Couric’s tell-all memoir reveal how much she knew about his alleged sexual misconduct 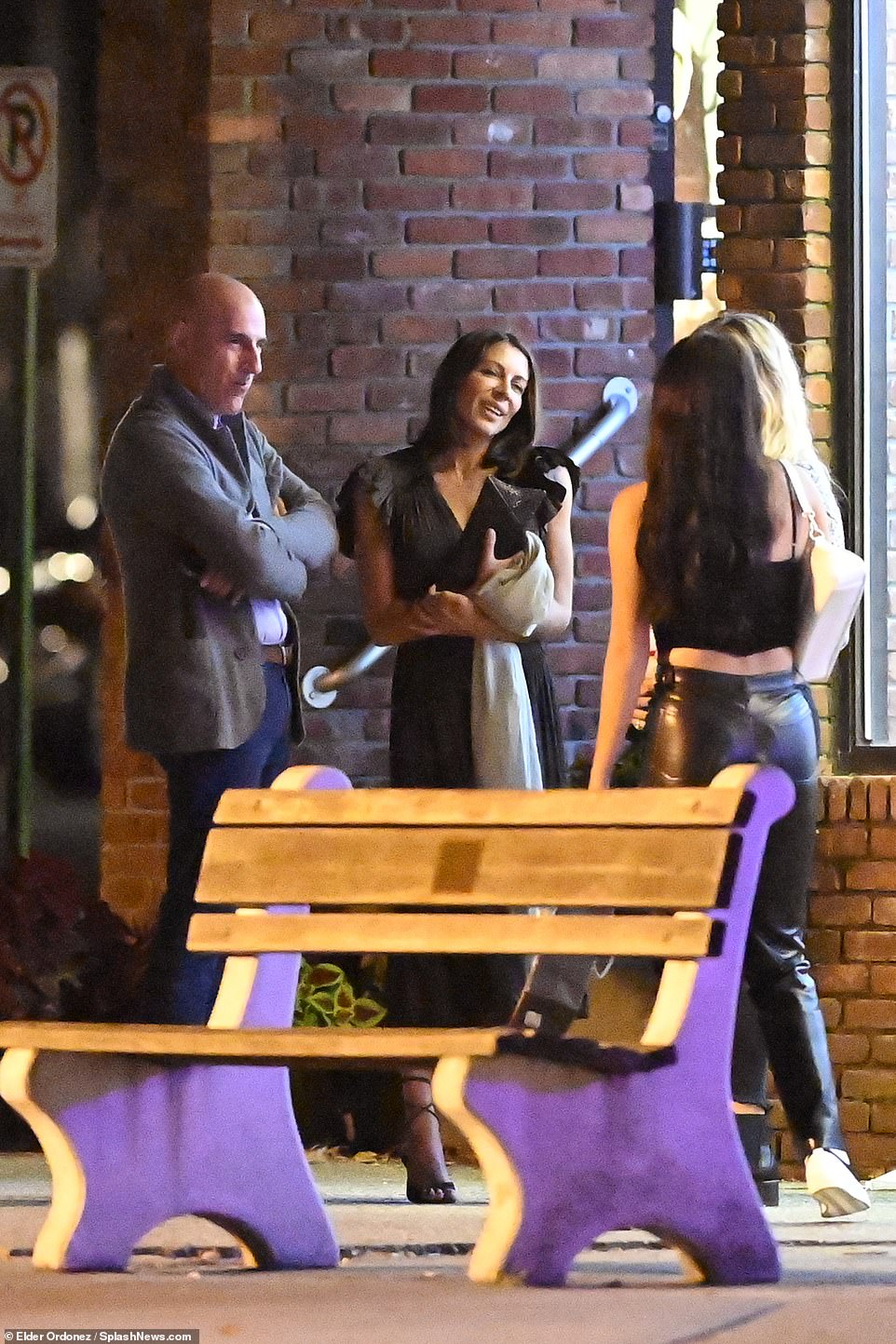 In addition to Romy and a friend, Lauer was seen with his girlfriend Shamin Abas (center) 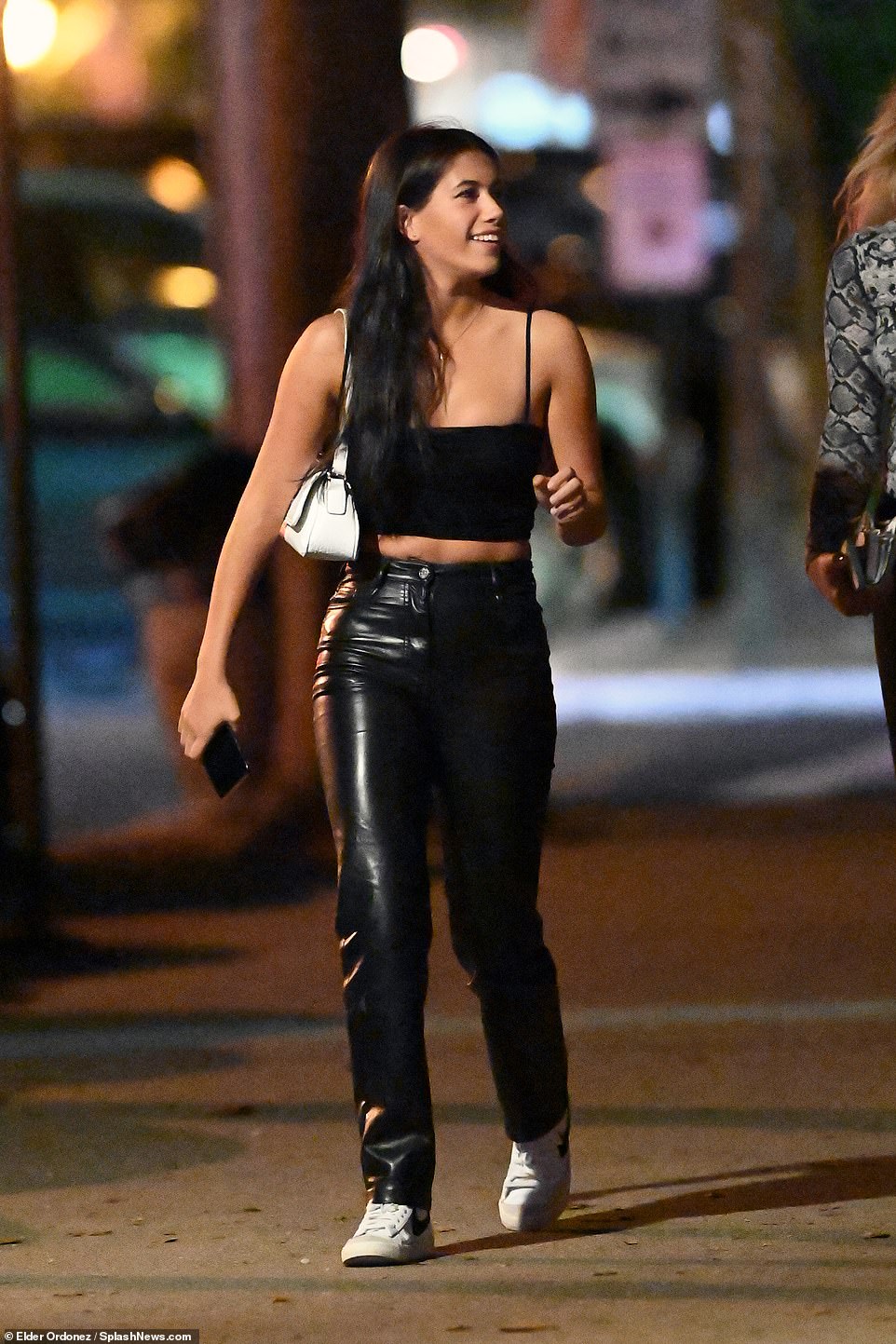 In her tell-all Going There, Couric  admits she ‘heard the whispers’ about her longtime colleague.

Additionally, the women who were left ‘damaged’ by Lauer’s actions spoke with Couric as she was writing her book, she revealed, although the former anchor didn’t name them.

‘I suspect they’ll be dealing with this for the rest of their lives,’ Couric writes, according to The New York Post.

In one story involving Lauer, it is said that he would deal with women behind closed doors in his office, which was equipped with a desk button to lock the door.

Couric writes that one unnamed producer was told by Lauer to come to the now-infamous office wearing a ‘skirt that came off easily’.

She also claims that Lauer complained to her that he felt uncomfortable putting his arm around a female colleague to comfort her when she cried, over fears he could subsequently face an allegation of inappropriate behavior. 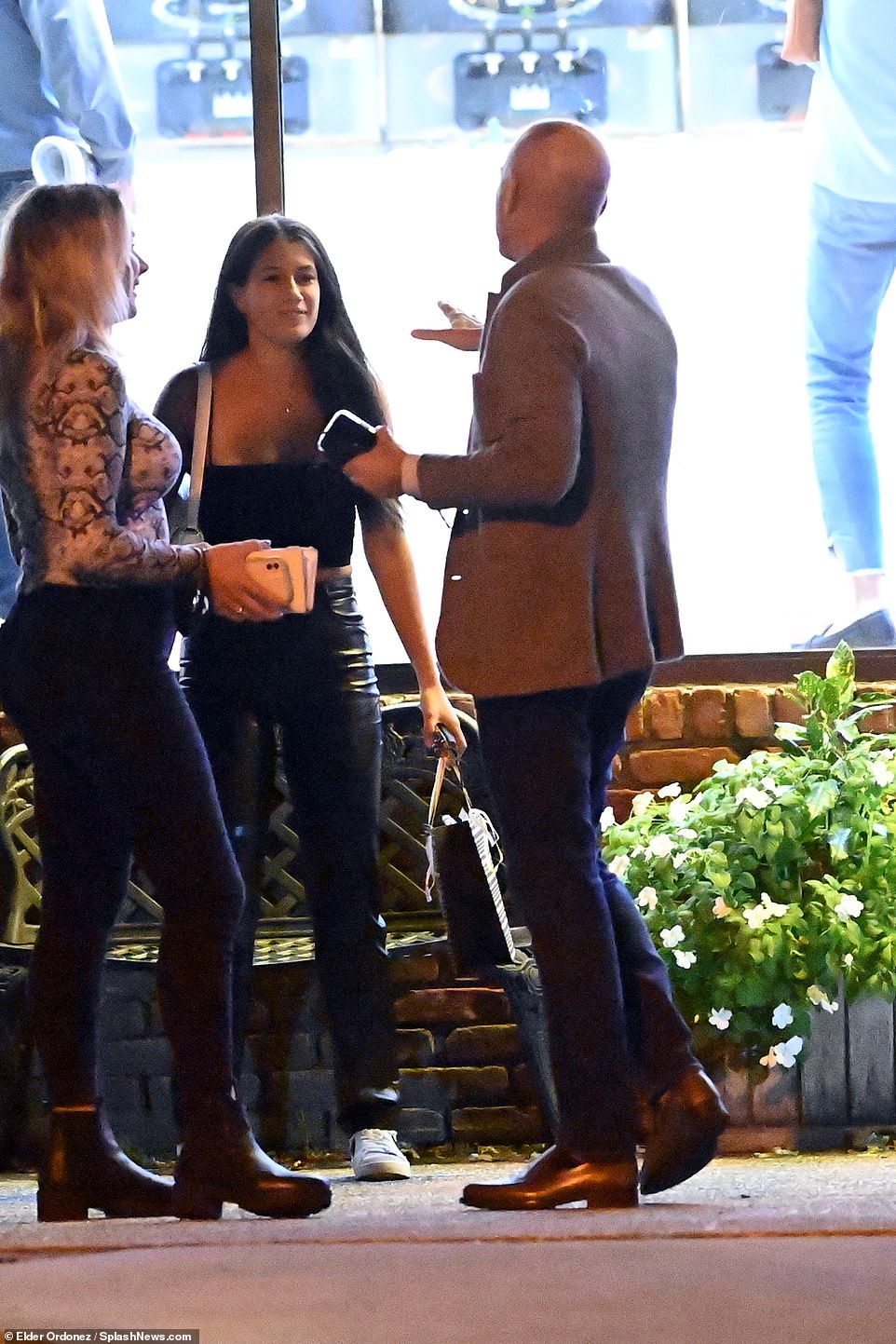 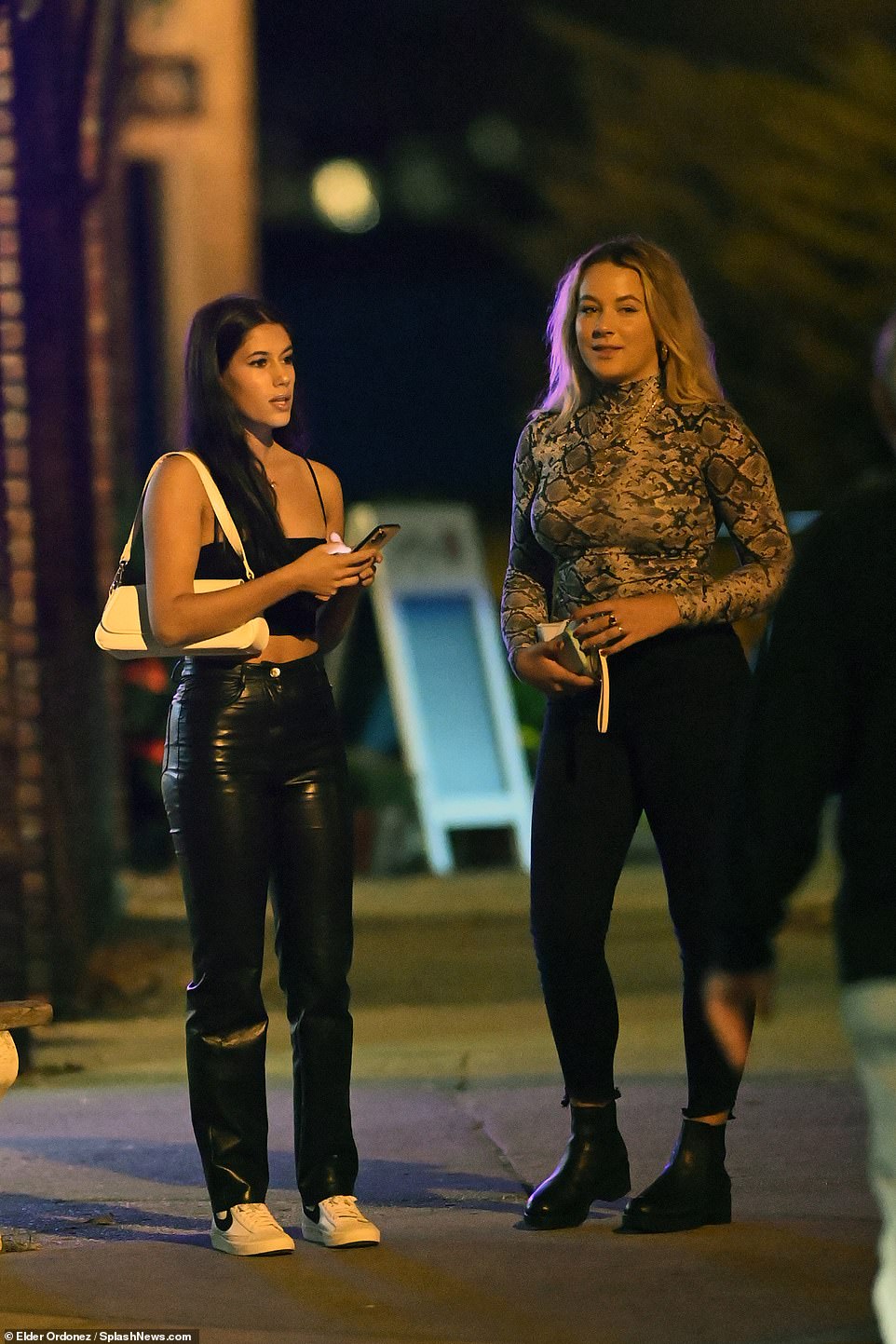 In addition to Lauer and Abas, Romy was out with an unidentified friend days after excerpts from Katie Couric’s new memoir were teased 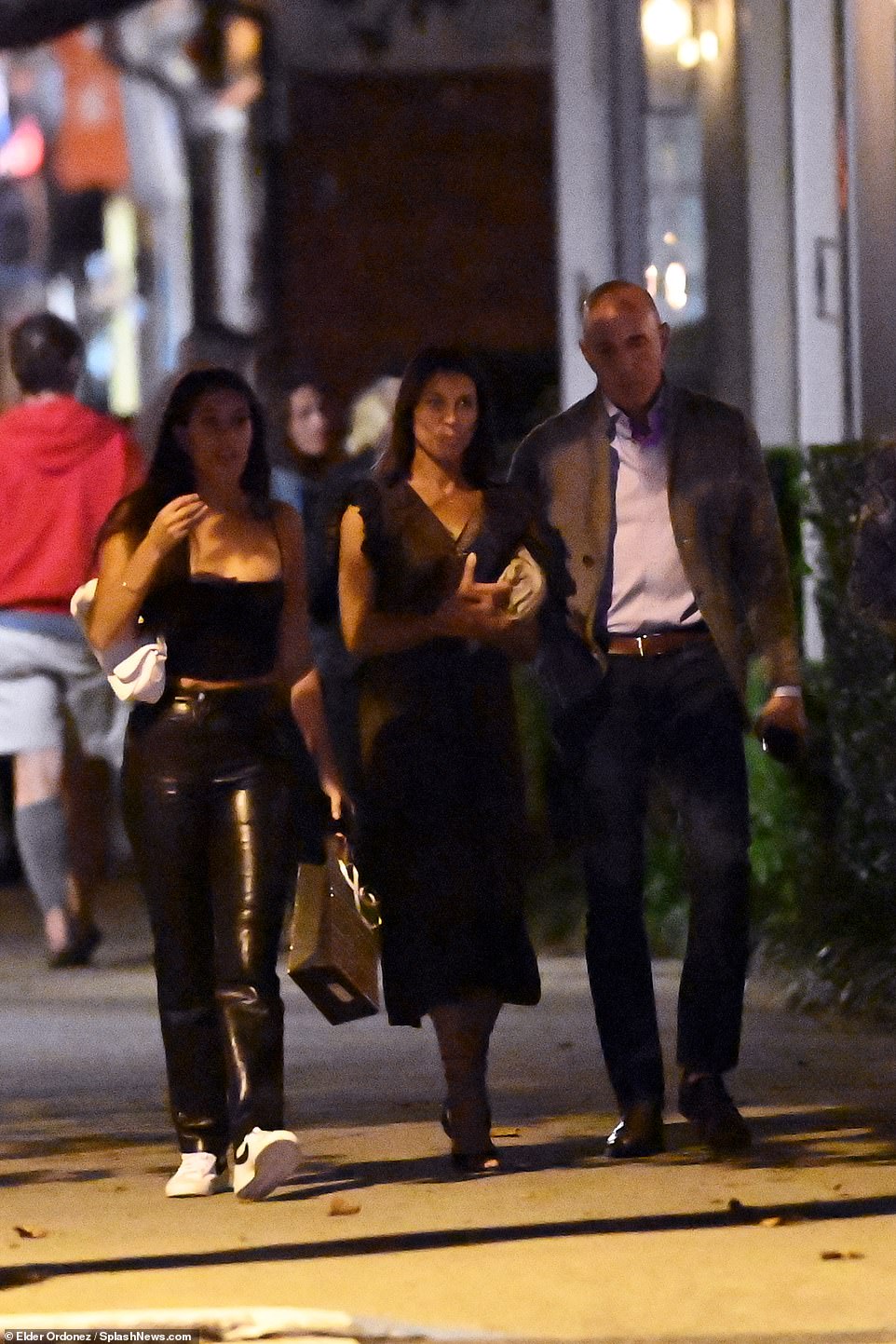 Even before these allegations were made, Couric said her former co-anchor Lauer told her he thought that feminist movements such as The Me Too were becoming too powerful.

‘This MeToo stuff feels like it’s getting kind of out of control,’ Lauer reportedly told Couric. ‘It feels like a witch hunt.’

She added that Lauer was ‘worried about a lack of due process, people’s livelihoods and reputations being destroyed.’

Couric told Lauer to stop putting his arm around the women as it was making them uncomfortable, she writes.

She said that she tried to ‘imagine such a scene taking place’ and told Lauer that ‘he cannot do that – you cannot put your arm around them,’ The Post reported. 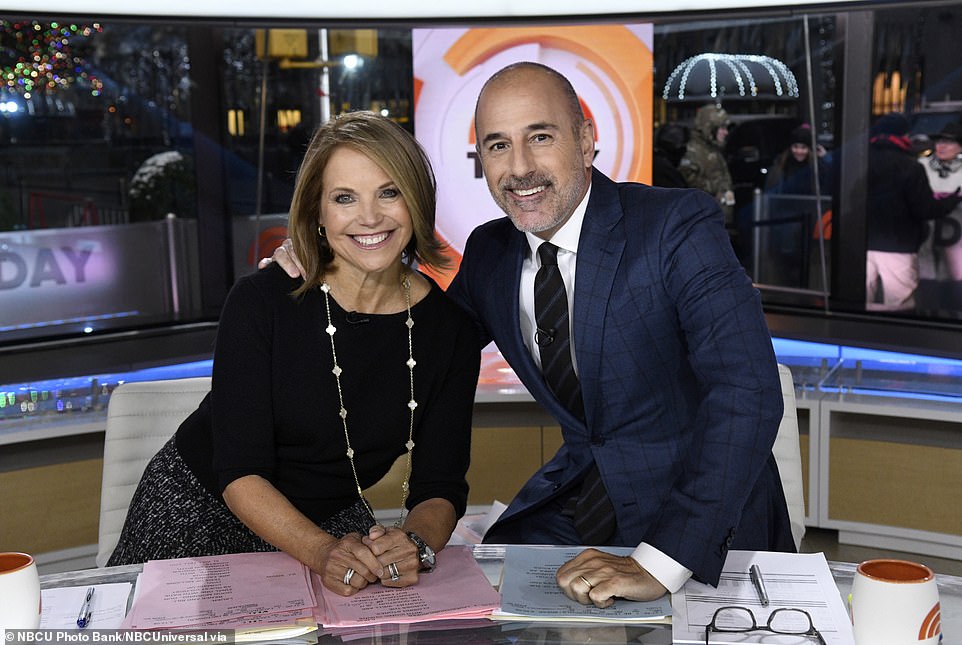 Couric also writes in the book, out Oct. 26, that she also heard ‘rumors’ that her co-star’s wife Annette Lauer had called the control room one morning looking for her husband and demanding the phone number of a TV anchor he had been linked with.

They divorced after news of Lauer’s misconduct exploded. 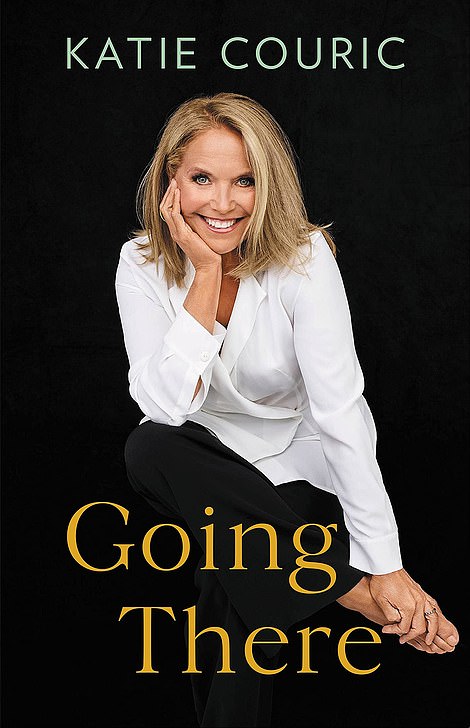 In Couric’s Going There, she details her experiences working for The Today Show and with Matt Lauer who she reportedly sent sympathetic texts to after he was fired in 2017

She also spoke of a secret office known as ‘bunker’ where an unnamed anchor went for trysts at NBC HQ, saying it was all part of a culture where sex and affairs were rife in the workplace.

Couric alleged that only an unnamed ‘male anchor’ had the key to open the office to use it for ‘one-on-one encounters, and I don’t mean interviews,’ she is said to have written.

Couric had served as a co-anchor for The Today show between 1991 and 2006 and worked closely with Lauer for nine years.

Her book also revealed an incident that involved an unnamed female producer who received inappropriate emails from Lauer in 2004.

In response to a congratulatory email she sent following a segment with biographer Kitty Kelley for her tell-all book on the Bush Family, Lauer asked her if she was trying to ‘butter him up’ and then asked her to show him by ‘spreading it between her thighs’.

He also reportedly asked her to wear ‘a skirt that comes off easily’ into the office, Couric said the producer told her.

Couric writes that the producer told her a ‘flustered’ Lauer visited her office after he sent the email with a book option for the show, but didn’t address the incident. Couric said: ‘They never spoke about the incident.’

DailyMail.com previously saw a manuscript for Couric’s book which also revealed that she had previously left Lauer sympathetic texts after he was fired.

‘But he betrayed me, too, by how he behaved behind closed doors at the show we both cared about so much,’ Couric said.

Behind these closed doors, women were reportedly crying and going into Lauer’s office, which came supplied with a desk button to lock the door. 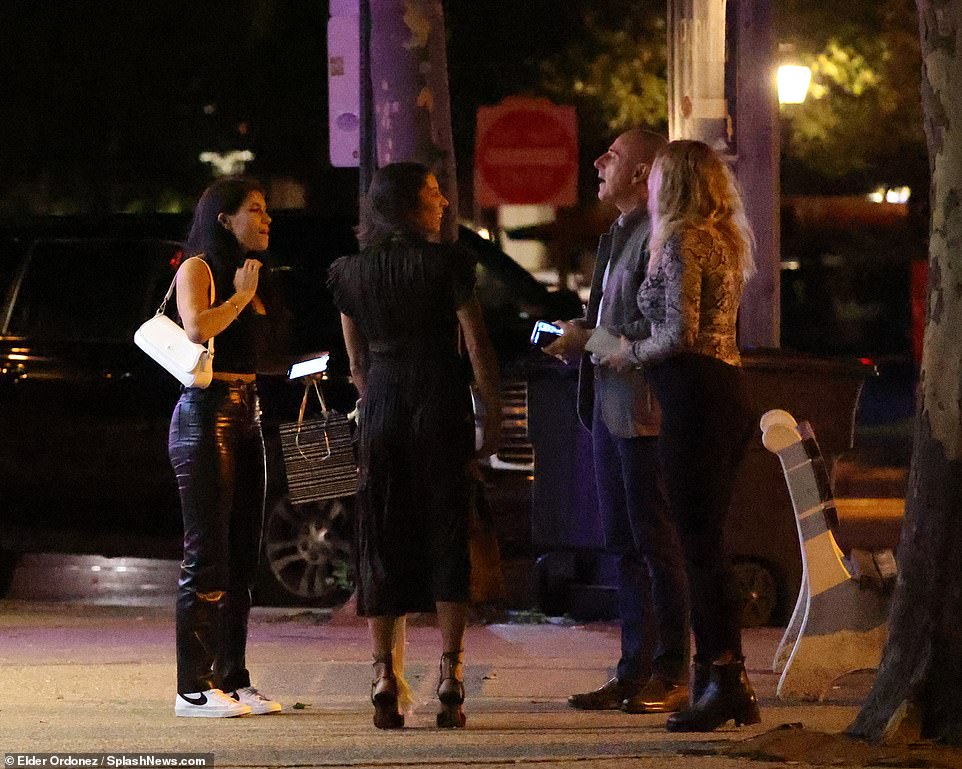 The group appeared to have a good evening together, despite the resurfacing of sexual misconduct allegations against Lauer a day prior 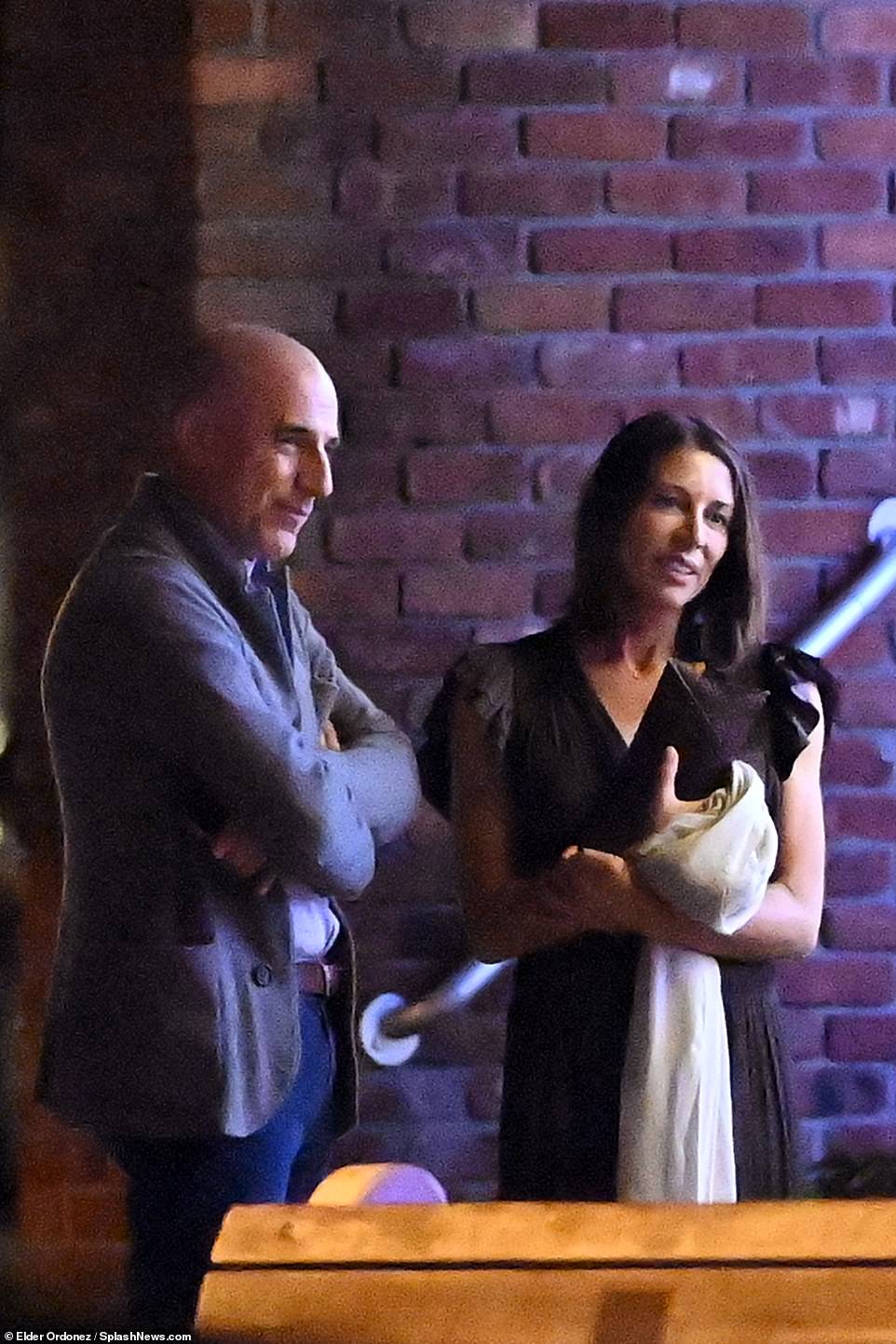 Lauer and Abas were seen together again Saturday, the couple has been spotted on a few rare occasions

Reports said that he gave one woman a sex toy and an explicit note saying how he wanted to use it on her. He was also accused of showing another woman his penis in his office and played ‘f***, marry or kill’ in the office.

Other anonymous women are reported to have complained to NBC about Lauer’s sexual impropriety, with one saying she was summoned into his office in 2001 for sex. He would also sometimes quiz female producers about who they had slept with, it has been alleged.

Despite the string of salacious revelations about her former colleague, Couric also described Lauer in her book as a ‘decent’ man and it ‘felt heartless to abandon him.’

She writes that ‘my heart sank’ when she heard that Lauer had been fired and says that she ‘couldn’t imagine’ what it was like to be him. 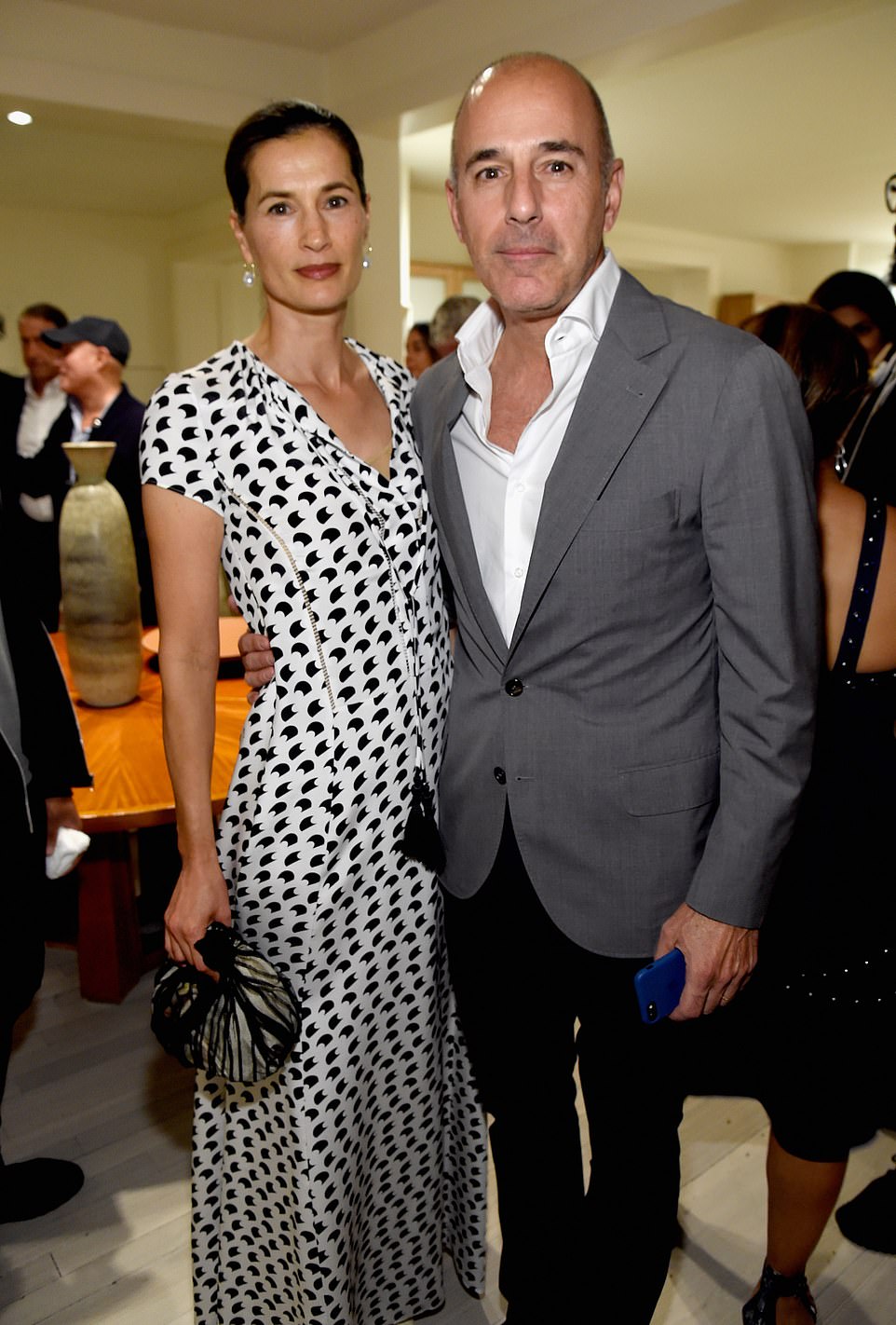 Not seen out with the group was Romy’s mother, Annette Roque,(pictured)  who divorced Lauer following the scandal

Couric says there was still a part of her that wondered if the allegations were just wild rumors.

On November 28, 2017, the day Lauer was fired, Couric had a brief text exchange with Lauer which she reproduces in the book.

‘I am crushed. I love you and care about you deeply. I am here. Please let me know if you want to talk. There will be better days ahead,’ she wrote in a text to Lauer after he was fired. He responded with a blowing kiss emoji.

Lauer’s wife Annette divorced him in a stunning fall from grace for somebody who was once the highest paid TV host in the country, earning $25million a year.

Couric admitted that she initially thought it was ‘gross’ that Lauer was cheating on Annette, and allegedly taking advantage of younger staffers, ‘The general rule at the time was, ‘It’s none of your business. A don’t-ask-don’t-tell culture where anything goes, and everything did,’ she said.

She writes in her book that she thought it was a ‘consensual fling’ and didn’t consider talking to the unnamed employee out of fear of embarrassing her.

Going There will be released on October 26.