As 1969 dawned, The Beatles appeared to be riding high on the success of the ‘White Album’ and the ‘Hey Jude’/‘Revolution’ single, both huge hits for their new Apple Records label. In reality they were unravelling, as Apple haemorrhaged cash, John Lennon immersed himself in heroin with new love Yoko Ono and the band embarked miserably on a new, back-to-basics album. Amid weddings, bed-ins and drug busts, The Beatles eventually made two albums in 1969 – ‘Let It Be’ and ‘Abbey Road’ – but it was also the year they secretly split, torn apart by money, business strife – and Lennon’s decision to supplant Paul McCartney and make Yoko his creative collaborator…

The Beatles’ Apple organisation, conceived by McCartney as a hippy boutique, record label and multimedia company that would offer grants to visionary artists, spent £1.5 million of the band’s money in 1968 – the equivalent of £30 million today – but made only £78,000

They didn’t care too much for money

The Beatles’ Apple organisation, conceived by McCartney as a hippy boutique, record label and multimedia company that would offer grants to visionary artists, spent £1.5 million of the band’s money in 1968 – the equivalent of £30 million today – but made only £78,000. ‘Apple was like playing Monopoly with real money,’ said Lennon later. Meanwhile, each Beatle had hugely overdrawn their company expense accounts – Lennon by £64,000, McCartney by £60,000, Harrison and Starr by around £35,000 each. When accountants questioned why the drug-addled Lennon was spending so much money on ‘sweets’, an Apple employee recalls, ‘I had to point out they weren’t really sweets.’ Lennon’s skin was sallow, his pupils dilated, his eyes sunken and he later blamed his drug use on the other Beatles and their attitude to Yoko. ‘John was strung out on heroin so he behaved like most junkies – manipulative, self-centred, in pain,’ says Barry Miles, a friend of the band. To cap it all, the highly competitive Beatles were furious to discover that The Rolling Stones were making more money than they were, despite selling fewer records. 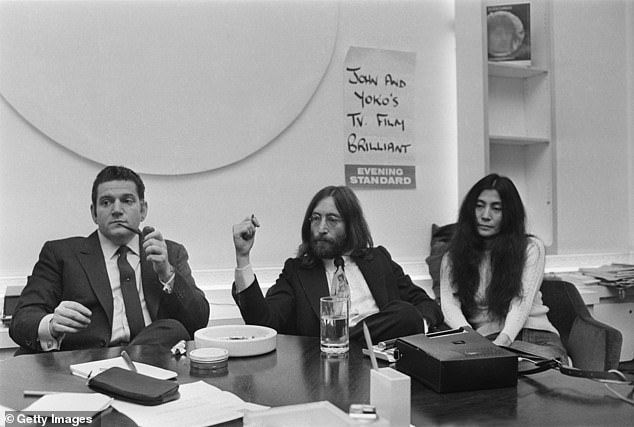 John and Yoko with businessman Allen Klein in July 1969. Klein had revealed that McCartney held a £1.4 million stake in Northern Songs, to Lennon’s £1.25 million

While the guitarist gently weeps

Throughout the band’s later years, Harrison felt patronised and belittled by chief songwriters Lennon and McCartney. Well-known Let It Be footage caught Harrison and McCartney bickering quietly over a guitar part. But it was an argument about Lennon’s apparent disdain for George’s new songs, and his resentment of Yoko’s constant presence in the studio, that prompted Harrison to quit the band just days into the sessions. ‘See you round the clubs,’ he told Lennon. ‘Put an ad in the NME.’ After George had gone, Lennon and McCartney launched into an ear-splitting jam with Yoko on vocals, after which Lennon said: ‘If he’s not back by Monday, we’ll get Eric [Clapton] in.’ Harrison was coaxed back after a few days.

All you need is… shares

The increasingly strained Lennon-McCartney relationship may have been permanently ruptured by John’s discovery that the canny Paul had been secretly buying extra shares in Northern Songs, their publishing company. In a meeting in April, Allen Klein, the brusque American brought in by Lennon to manage their business affairs, revealed that McCartney held a £1.4 million stake to Lennon’s £1.25 million. ‘I had some beanies and I wanted more,’ was McCartney’s sheepish defence. The two are said to have almost come to blows, with a red-faced Lennon shaking his fist at Linda McCartney and allegedly calling Paul ‘a bastard’. Lennon would never forget the hurt. ‘It was the first time any of us had gone behind the other’s back,’ he later recalled. 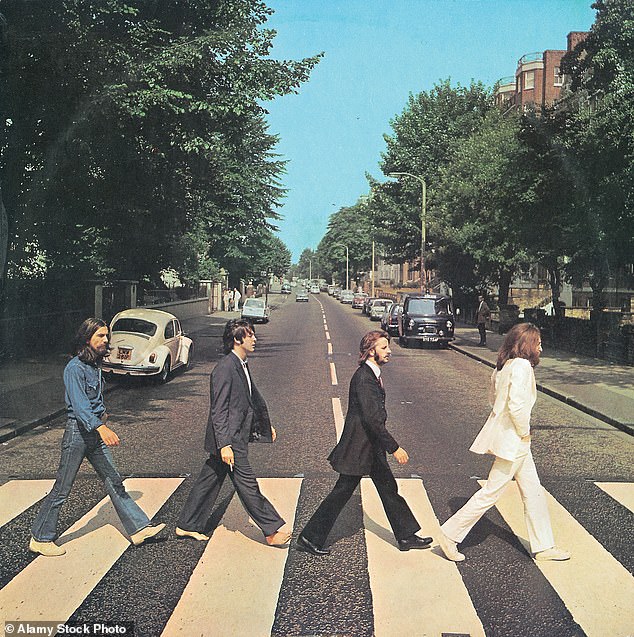 Photographer Iain MacMillan took only six shots of the band walking across the zebra crossing for the cover of Abbey Road, while a passing policeman held up traffic and the painters in the background declined the photographer’s requests to move

Baby, you can’t drive this car

Feeling guilty about his lack of contact with his six-year-old son Julian, Lennon went on a family road trip to Wales, Merseyside and Scotland to visit relatives in June. But at every chilly stop, Lennon’s angry aunties berated him for his lifestyle, his abandonment of first wife Cynthia and his peculiar new Japanese, avant-garde artist bride, who would only eat her own macrobiotic food. Even his cousin Stan Parkes, a close friend, told him bluntly he couldn’t see what he saw in Yoko. And then in early July, up in the Highlands, Lennon, a poor driver with terrible eyesight, ran his Austin Maxi off the road, leaving John and Yoko needing stitches and a six-day stay in the Lawson Memorial Hospital in Golspie, 50 miles north of Inverness.

She woke up, fell into bed

After his Scottish car crash, Lennon arrived at Abbey Road with an unsteady Yoko and, to his bandmates’ amazement, four delivery men from Harrods, who wheeled a massive double bed into Studio Two. Yoko climbed in between the sheets, but not before asking for a mic to be hung overhead so she could make suggestions. ‘What could we say?’ said McCartney. ‘She was John’s bird.’ McCartney took his revenge by leading the band through take after take of Maxwell’s Silver Hammer, a song he knew John hated. The feud continued after The Beatles attended a private screening of Michael Lindsay-Hogg’s Let It Be film. None of them raised any objections to its content after the credits rolled, but the following day, Apple’s Peter Brown phoned Lindsay-Hogg demanding all the footage of John and Yoko be cut. ‘Let me put it another way. I’ve had three phone calls [from the three other Beatles] this morning saying it ought to come out.’

We can walk it out

Photographer Iain MacMillan took only six shots of the band walking across the zebra crossing for the cover of Abbey Road, while a passing policeman held up traffic and the painters in the background declined the photographer’s requests to move. McCartney wore sandals in three of the shots and went barefoot in three. Apple creative director John Kosh took the decision not to put the band’s name on the cover, and when EMI chairman Sir Joseph Lockwood saw the sleeve, he phoned the young designer at 3am, told him he’d cost the band thousands of sales and called him ‘a f****** p****’. Kosh was terrified and told George Harrison, who said: ‘F*** it man, we’re The Beatles’. 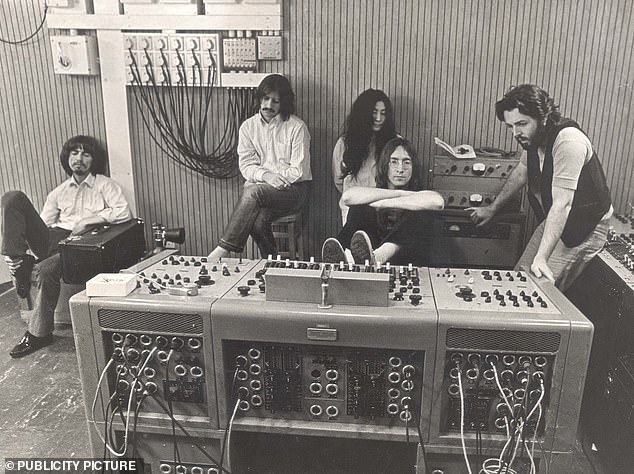 The last time all four Beatles shared a recording studio was in the early hours of August 21, 1969 after a long evening spent debating the running order of Abbey Road

And in the end…

The last time all four Beatles shared a recording studio was in the early hours of August 21, 1969 after a long evening spent debating the running order of Abbey Road. Lennon wanted the album to conclude with his love song to Yoko, I Want You (She’s So Heavy), but he was overruled by McCartney and producer George Martin, who favoured the famous medley. The group’s final photo-shoot took place on August 22 at John’s Tittenhurst mansion, though John, Paul, Ringo, Yoko and Allen Klein were photographed signing a contract at Apple on September 20, moments before Lennon announced he was quitting the band. The meeting broke up to the sound of doors slamming. Beatles roadie Mal Evans reputedly found Paul in tears, while John, Yoko and Klein went to a nearby restaurant, The Peppermill. 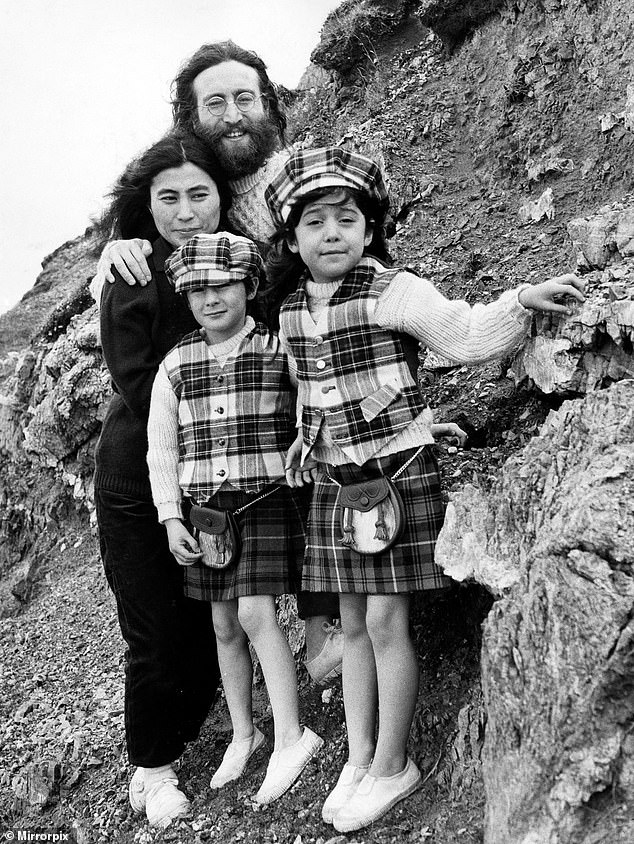 John and Yoko in the Highlands with their children Julian, on left, and Kyoko

A little help from their friends

John, George and Ringo flew to the Isle of Wight festival on August 31 to see Bob Dylan’s headlining set, and were dogged all day by ultimately unfounded rumours that they might join Dylan on stage. In October, days after The Beatles’ split, Jimi Hendrix and Miles Davis sent McCartney a telegram that said: ‘We are recording an LP together this weekend in New York. How about coming in to play bass?’ It is not known whether Paul ever saw the message, but he left London with Linda and weeks-old baby Mary the following day for his Scottish farm.