This is the amusing moment a little boy fell off his chair as he desperately tried to climb down when he heard an ice-cream van’s music.

Footage shows the toddler tucking into beans on toast while his younger brother eats buttered toast behind him in their home in Limerick, Ireland.

As the little boy hungrily eats his snack with his mouth open, the younger sibling starts approaching him and trips up.

A little boy fell to the kitchen floor as he hastily tried to climb down after hearing the sound of an ice-cream van in Limerick, Ireland

Seconds later, the chirpy sound of the ice-cream van plays.

He tries to climb down his chair hurriedly but ends up falling on to the kitchen floor, in the clip which has resurfaced from 2014. 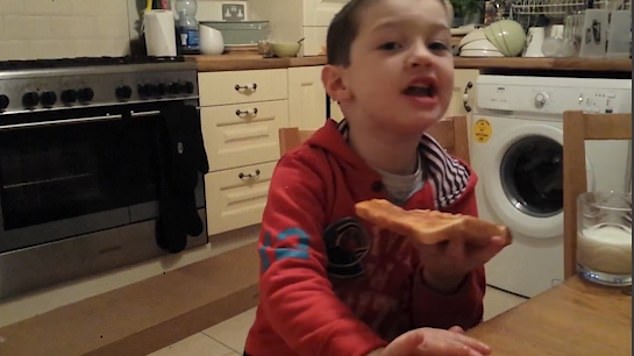 Meanwhile the godmother appears more amused than concerned and struggles to contain her amusement.

She bursts into laughter while her youngest looks on with a baffled expression.

But moments later, the fallen toddler bursts into tears and is seen holding his legs close to his chest. 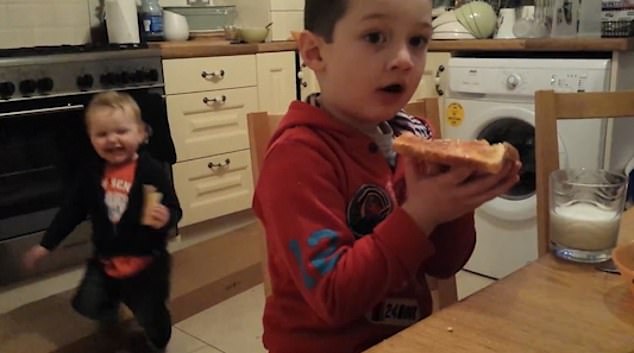 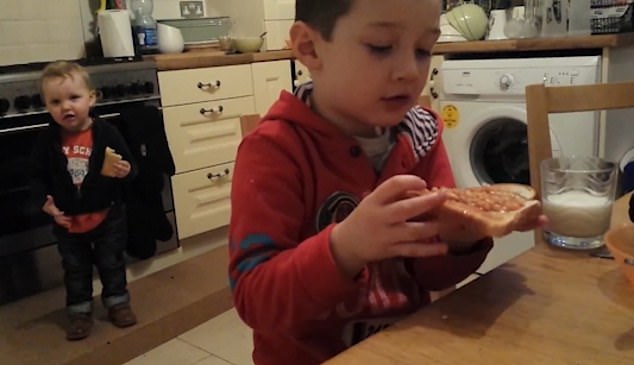 The little boy was sat eating beans on toast while his younger brother munched on buttered toast in their family home. His godmother joked on Facebook following the incident: ‘No harm came to them but their mammy might think twice before asking me again’

The incident takes an unexpected turn as he cries in agony.

Selina jokingly wrote on Facebook: ‘An evening babysitting with my godson Liam and his brother Luke. No harm came to them but their mammy might think twice before asking me again.’

Their mother Karen Naughton appeared to find it amusing as she captioned the clip: ‘Dumb and Dumber.’