An exclusive Australian boys’ college has been slammed for making hundreds of students attend a sports celebration amid the government’s ban on mass gatherings.

Scots College, in Sydney’s eastern suburbs, won the prestigious Head of the River regatta -a hotly contested traditional race among private boys colleges-  for the first time since 1979 on Tuesday.

To celebrate, a senior staff member sent an email ordering staff to take students to a ‘brief assembly on the Main Oval to welcome back our rowers’, ABC News reports.

‘It’s absolutely ridiculous to hold an assembly,’ a teacher, who wished to remain unnamed, said.

‘They’ve taken all these precautions: packaging our lunches, shutting things down and then they decide to have an assembly to celebrate a sporting win.’

‘It went against the advice of the NSW Health Department, the World Health Organisation — all the warnings we’ve been given.’

In response, NSW Education Department secretary Mark Scott announced new social distances measures to be rolled out in schools, including the cancellation of assemblies, excursions, travel, some events and conferences.

One student said the $34,900-a-year school had already cancelled smaller gatherings, and he and others had expressed their concern about the assembly to teachers. 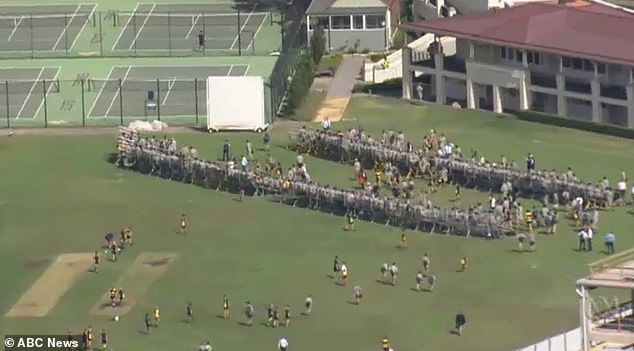 On Wednesday, the government imposed tighter restrictions, reducing mass gatherings to no more than 100 people indoors in a bid to combat the spread of coronavirus within the country.

Mr Morrison announced that all international flights would be grounded as confirmed cases of the virus have soared past 450 nationally.

Despite school closures in other countries, Australian students will remain in class under the advice of medical authorities.