An Australian chef who has cooked for the Danish royal family has revealed what it was really like to be a chef for the likes of Prince Henrik, Queen Margrethe and Prince Frederik, as well as the cooking secrets he swears by for success in the kitchen.

Kasper Christensen, 41, who comes from Jutland in Denmark but lives in New South Wales, has worked as a chef all over the world, and is currently leading kitchen teams at Sydney Opera House.

When he was just 21, Kasper was handpicked ahead of his cohort at university to be the Royal Chef for the Danish royals, during their summer yacht trip throughout Europe.

An Australian chef who has cooked for the Danish royal family has revealed what it was really like to cook for the likes of Prince Henrik, Queen Margrethe and Prince Frederik (Kasper Christensen pictured) 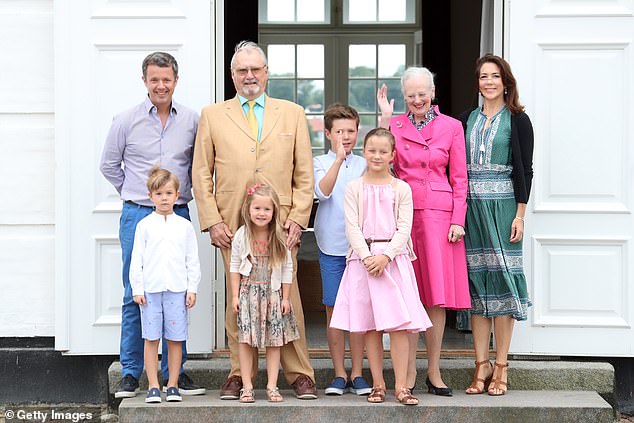 When he was just 21, Kasper was handpicked ahead of his cohort at university to be the Royal Chef for the Danish royals, during their summer yacht trip throughout Europe (Danish royal family pictured)

‘I think I was pre-programmed to become a chef, as I’ve been told stories of my mother’s desperate attempts to keep me out of her veggie patch as I would eat everything on site,’ Kasper told FEMAIL.

‘But getting the gig as the Private Chef for the royal family had become a goal for me when I was in my apprenticeship.

‘Danish military service is compulsory, and each year one chef gets placed in the navy and one is chosen to cook for the Danish royals on board their yacht during the summertime.’ 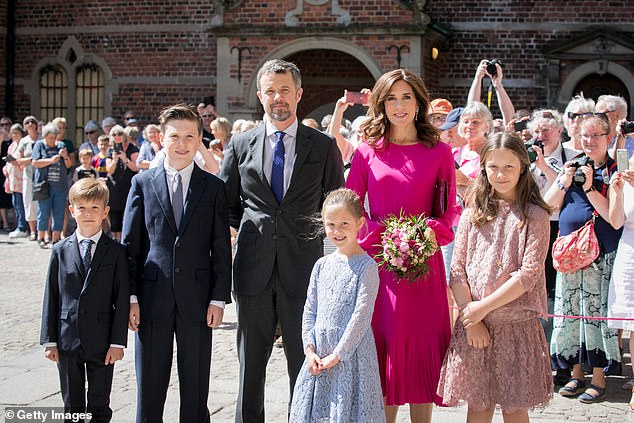 Kasper said he worked for Prince Henrik and Queen Margrethe between February and September 2000, when Prince Frederik was in Sydney for the fateful Olympic Games where he met his Australian wife, Mary Donaldson (pictured with their children) 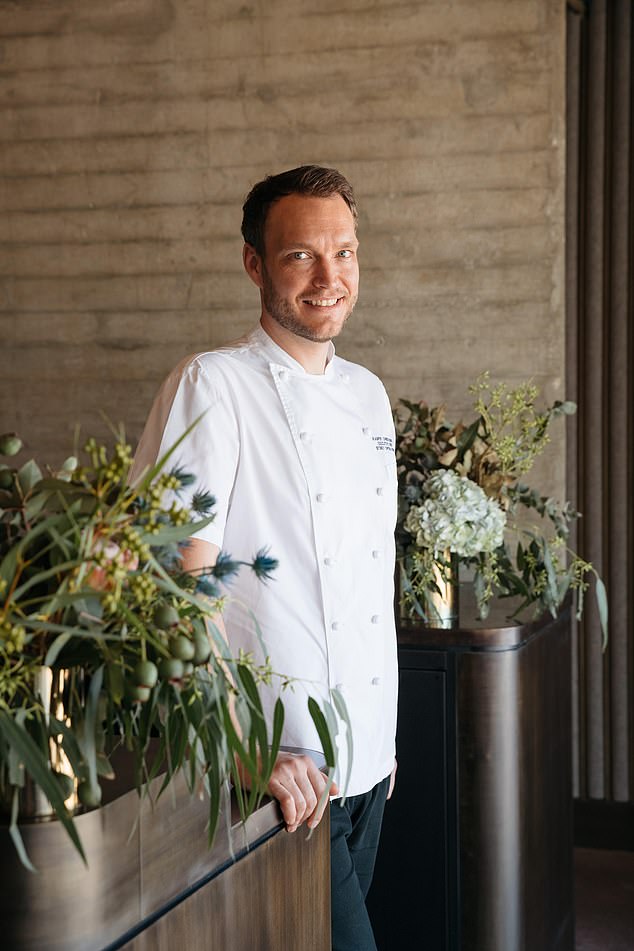 When Kasper (pictured) worked for the Danish royal family, he said he admired just how relaxed and ‘personable’ they could be

Kasper said he worked for Prince Henrik and Queen Margrethe between February and September 2000, when Prince Frederik was in Sydney for the fateful Olympic Games where he would meet his Australian wife, Mary Donaldson.

During this time, he admired just how relaxed and ‘personable’ the family could be.

‘The Danish royal family has a very casual approach to their way of fitting into the community, and they get my full admiration and respect for it,’ he said.

‘I cooked for pretty much everyone in the immediate family and the royal bloodline covers most of Europe so it was a pretty interesting time for me as a 21-year-old, but they were so welcoming and open to me as their chef.

‘I would see them daily after breakfast for a talk about their wishes for food the day, they would join me on market trips, and the late Prince Henrik, Frederik’s father, even joined me in the kitchen on a few occasions!’ 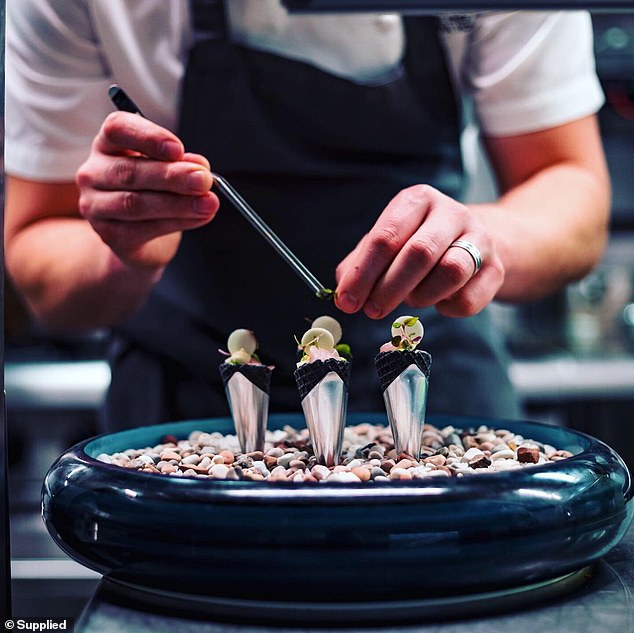 Kasper has worked at any number of fancy restaurants, including Noma and Quay (pictured at work)

Kasper has fond recollections of all of the family, especially the late Prince Henrik, who taught him how to cook a number of French dishes ‘that I didn’t know about at the time’, and also gave him ancient bottles of alcohol to cook with.

‘The Royals’ wine cellar was mind-blowing,’ he recalled.

‘I remember one day specifically, Prince Henrik, or “The King” as we used to call him, brought a box of mysterious-looking plain bottles on board the ship.

I remember one day specifically, Prince Henrik, or “The King” as we used to call him, brought a box of mysterious-looking plain bottles on board the ship.

‘They turned out to be the last box of rum that had been brought back from the West Indies and given to the royal family as a gift when Denmark sold the islands to the US in 1917.

‘I’ll never forget the first bottle I opened, the most intense sweet aroma quickly spread across the whole galley. It made some beautiful desserts (and a good rum and coke!)’

The 41-year-old chef also has great natural affinity with Prince Frederik, who he said used to come to local harbour pubs with him and was a ‘lot of fun’.

‘It’s amazing to see how the family have not stuck themselves up on a pedestal, but instead fit in beautifully with the Danish way of living,’ he said. 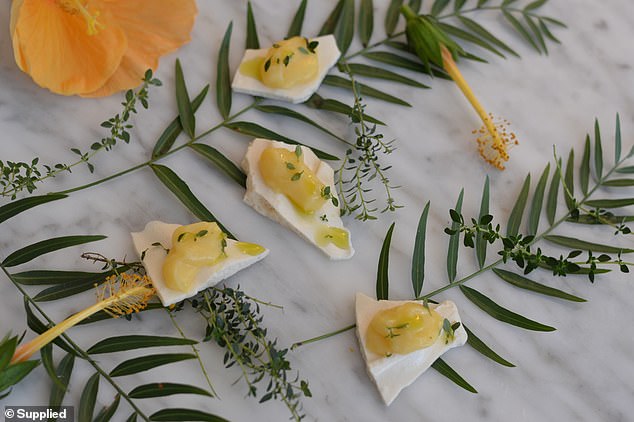 When it comes to his chef secrets, the 41-year-old believes hard work with ‘zero shortcuts’ is what will get you there. Kasper said you need to be curious and read cook books (his work pictured) 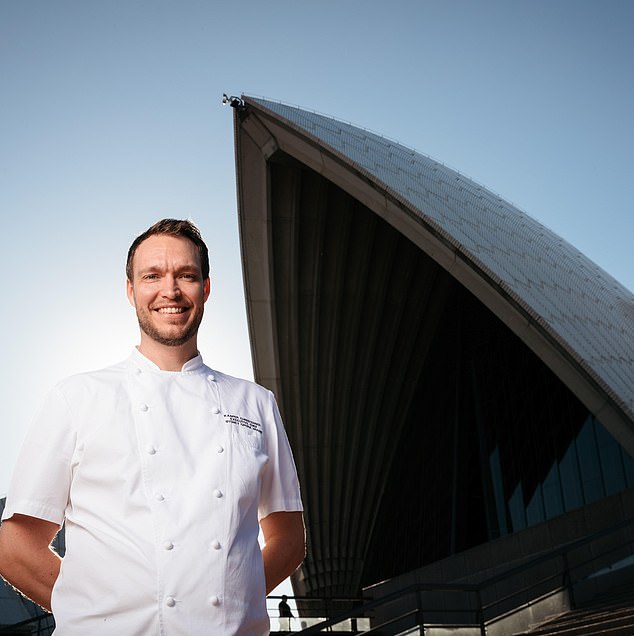 Kasper (pictured) recommends that you always treat the produce as your hero, and so you need to treat it with respect

When it comes to his chef secrets, the 41-year-old believes hard work with ‘zero shortcuts’ is what will get you there.

‘Be curious, read cook books and study as much as possible,’ he said.

‘You should also always remember that the produce is the hero, so treat it with respect.’

Kasper’s favourite recipe to cook for a crowd is his Murray Cod cooked in salt, which he serves with foraged herbs and buttered surf clams (recipe below).

‘It’s delicious and a real crowd pleaser,’ he said. 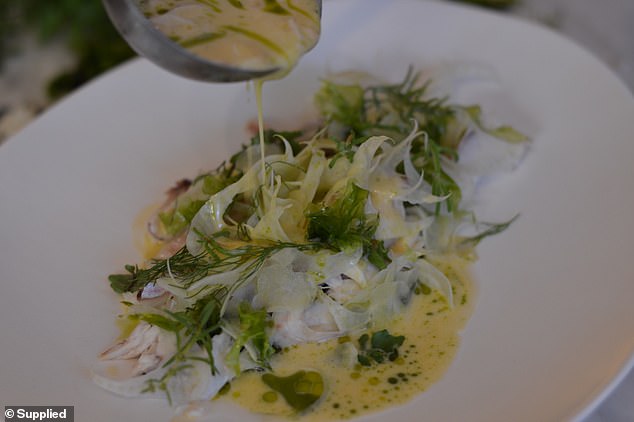 ‘I use a lot of the new Nordic cuisines basic rules of foraging and sourcing local, sustainable produce,’ Kasper said (his food pictured)

Recently, Kasper has launched any number of unique projects as a result of COVID-19, including his Bread For Life project, where he fresh or dry sourdough starters and also created online tutorials in the art of making sourdough all in the name of charity.

‘I have also launched countless other live workshops during COVID-19, including group foraging classes and private dining.’

Over the years, Kasper has worked at any number of high-profile restaurants including Quay and Noma, which has influenced his cooking hugely.

‘I use a lot of the new Nordic cuisines basic rules of foraging and sourcing local, sustainable produce,’ he said.

For more information about the Bread For Life project, please click here.

Mix all ingredients well to a firm moist slurry.

1. Clean the fish and pat dry the inside for blood and guts, fill carcasses with chopped fennel trimmings, layer a one centimetre layer of salt crust under the fish, place the fish on top, and cover it with crust leaving the head exposed.

2. Place in 200 degree oven immediately after coating (if left on the fish and not cooked right away it will cure the fish and make it to salty), cook till it reaches 40 degrees in the core, probably about 30 minutes, take it out of the oven and let it rest for about 5-8 minutes.

3. Reduce the heat of the oven to 70 degrees and place your serving plates in the oven, using gloves carefully remove the crust and gently take the meat off the fish making sure not to get any salt onto the meat.

4. Portion the fish into 150g portions keeping the meat as intact as possible, place the meat on a clean tray and cover tightly with 2 layers of film, to reheat give them place them back into the warm oven for about 10 minutes.

1. Loosely chop dill with stems and all, add oil, place into blender or Thermomix, blend at high speed and set the cooking temp to 80 degrees.

2. If using a blender, let if go for about 8 min until the oil reaches 80 degrees, pour over pre-prepared strainer layered with a paper towel, let the oil drip through the bag and onto a container in ice bath to rapidly cool down the oil.

500g Pippies, vongole or other clams

1/ Heat up a heavy based pot and ensure you have a lid/bowl that seals the pot tightly, mix wine and spices, drain the clams, once the pot is hot add the clams then wine and place the lid on top and press it firmly down for one minute.

2. Once the clams have opened strain the liquid off and let the clams cool down quickly, take the clams out of the shells discarding the dirt sack.

3. Once this is all done chop the remaining clams with a large knife and reserve for later, store the meat with the strained liquid, to finish sauce reduce down to around 50ml, add diced butter and crème fraiche while blitzing with a hand blender to emulsify, before serving heat without boiling and re blitz the sauce before sending and add the warm meat and torn coastal spinach at the last minute, together with drops of dill oil.

4. Serve with raw fennel and beach herbs on top, drizzle a bit of doill oil on the plate and pour over the beautiful clam sauce at the table. Enjoy!