A woman experienced every gym-goers worst nightmare when an exercise machine tore off her leggings, exposing her thong-covered derrière.

In the short YouTube clip shared by RM Videos, the unnamed woman is doing a complicated strength training routine while hanging from a workout machine.

However, she only manages to get a few reps in before disaster ensues and her pants end up around her ankles.

Whoops! A YouTube video sees the moment an unnamed woman had her leggings ripped off by the resistance band she was hanging from

Verge of disaster: The woman was doing pushups while her hips were lifted off the ground when the resistance band started to pull at her pants

At the start of the clip, the woman has her hips lifted off the ground by a resistance band that is hanging from a workout machine.

With her lower half raised off the floor, the woman starts doing pushups while pushing her body backwards and forward.

She has a nice rhythm going, but suddenly the resistance band starts to pull at the waistband of her pants.

In one loud swoosh, the resistance band rip her pants right off her body until they are down to her ankles. 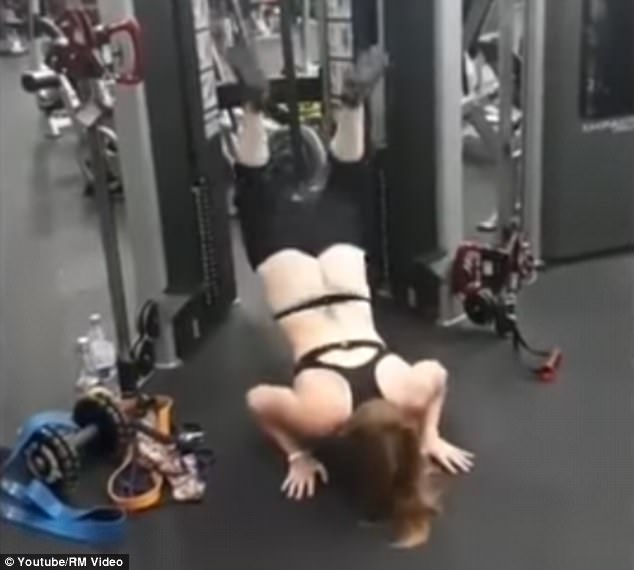 Going, going, gone: The woman’s pants were suddenly torn off her body in one loud swoosh

Good sense of humor: The woman’s bare bottom was exposed for the entire gym to see, but she still managed to laugh it off

For a second, her legs are still raised in the air while her butt is on display for the entire gym to see.

As soon as she falls to the ground, she yanks her pants back up around her waist.

Although it is undoubtedly a mortifying experience, the woman has a good sense of humor about the workout snafu.

The clip sees her laughing from the moment her pants are pulled off, and she continues to chuckle as she pulls them back up.

And while she ended up showing off a lot more than she bargained for, the video is certainly unforgettable.