Tech mogul and husband of the notorious fashion designer Diane von Furstenburg said he thinks ‘all men are guilty’ in regards to the #MeToo movement.

Barry Diller, chairman of mega-media and internet company InterActiveCorp (IAC) and Expedia, told the New York Times he believes the movement has permanently changed Hollywood and the media industry.

Diller said he sees the effects of the movement ‘in our companies, where the relationships between people are changing.’

‘I hope in the future for some form of reconciliation,’ he explained.

Barry Diller, tech mogul and husband of the notorious fashion designer Diane von Furstenburg said he thinks ‘all men are guilty’ in regards to the #MeToo movement. he is pictured at a Yahoo Finance summit in October 2017 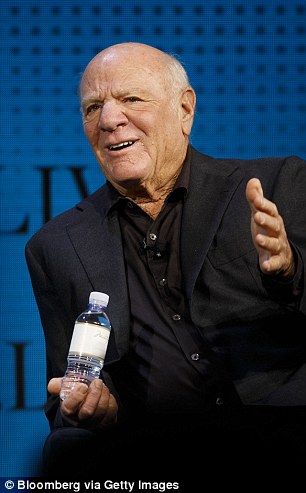 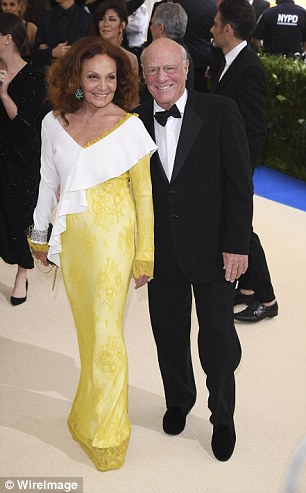 Diller said he sees the effects of the movement ‘in our companies, where the relationships between people are changing.’ He is pictured left in October 2017, and right at the 2017 Met Ball with Diane von Furstenburg

‘From an aggressive flirt. Or even just a flirty-flirt that has one sour note in it. Or what I think every man was guilty of, some form of omission in attitude, in his views.’ 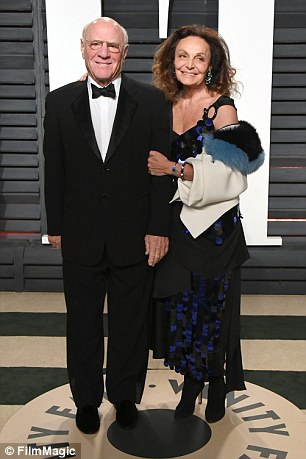 ‘From an aggressive flirt. Or even just a flirty-flirt that has one sour note in it. Or what I think every man was guilty of, some form of omission in attitude, in his views,’ Diller told the New York Times. He is pictured with von Furstenburg in February 2017

The 76-year-old also commented on how the #MeToo movement has started to impact the way men and women react in the workplace.

Speaking more about the #MeToo movement – Diller said he once called out Harvey Weinstein for being a bully early on in their relationship.

He recalled that years ago in Cannes, while he was working as cheif executive of Univversal, Stacey Snider, head of the movie division, confided in him that Weinstein had ‘treated her terribly and made her cry.’

Diller said he confronted Weinstein the next day, telling him: ‘Harvey, don’t ever treat an executive at my company that way. Don’t you ever talk to anyone in that manner.’

But the disgraced media mogul didn’t like being shamed, and Diller said Weinstein told him: ‘I’m going to throw you off the terrace.’

‘And this gorilla, because he looks like a gorilla, starts walking towards me, right?’ Diller said about the encounter.

‘And truly, I was scared. I thought, how, without cutting and running like a chicken, do I stop him? And somehow a bear came into my mind.’

He said he then put himself into a ‘menacing stance,’ which is what anyone who comes into contact with a bear is supposed to do, in an effort to ward Weinstein off.

‘It so surprised him that he stopped and I got out with a small amount of honor,’ Diller said. 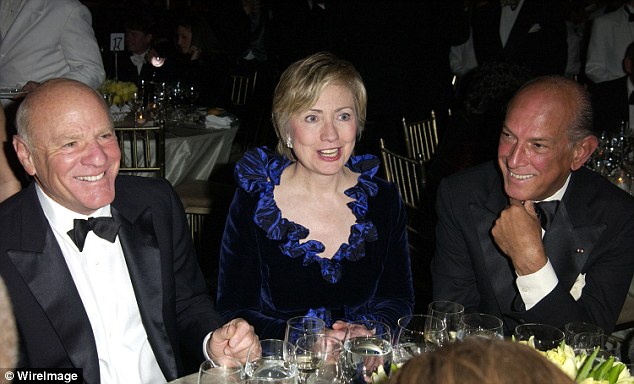 Diller also spoke about the political climate and President Trump, who he said he met years ago when they were both in their 30s in New York. He said at the time he did not like Trump and hoped he would never have to speak to him again. Diller is pictured with former Democratic presidential candidate and Hillary Clinton and Oscar de la Renta in 2003

Diller also spoke about the current political climate and his relationship with President Trump, who he has known since Donald’s early career days.

The pair met once when Diller was in his mid-30’s and Trump invited him to lunch. He left the meeting thinking he hoped to never meet him again, and said that over the decades, though they ran into each other socially, ‘I literally never spoke to him again.’

He joked that he hopes Trump, who once referred to Diller as a ‘sad and pathetic figure’ in a 2015 tweet, is being blackmailed by Russia.

‘I would so love it if he were being blackmailed by Putin,’ he said.

‘That would make me very happy. This was a man of bad character from the moment he entered adulthood, if not before. Pure, bad character. Ugh, Trump.’

Diller has close ties to the Clintons, and explained that he put Chelsea Clinton on the board of two of his companies.

He said that before Trump ran for president he may have considered Ivanka for a similar role, but explained that since she became first daughter his opinions have changed.

‘I would sit next to her every once in a while at dinner,’ Diller said about Ivanka, referring to a time before she became involved with politics.

‘And I, as everyone did, was like “Oh my god, how could this evil character [Trump] have spawned such a polite, gracious person?” I don’t think we feel that way now.’