Carl Marsh, 46, from Knutsford, Cheshire, went the aid of Dominic Leeds after a piece of equipment snapped as they emerged through clouds during a training exercise. Mr Marsh is pictured giving a thumbs up before a jump

A skydiving instructor fell 1,600ft to his death after he risked his own life to save a student whose parachute failed to open in mid-air.

Carl Marsh, 46, from Knutsford, in Cheshire, went to the aid of Dominic Leeds after a piece of equipment snapped as they emerged through clouds during a training exercise.

But when the father-of-one helped Mr Leeds to release his reserve second parachute, he became entangled in the student’s principal chute as it was being jettisoned away.

Although Mr Marsh managed to cut himself free, it is thought he then lost consciousness when his own parachute began spiralling to the ground at high speed and was unable to steer himself to safety.

He suffered multiple fatal injuries in the ensuing impact and died at the scene. His teenage son was working on the ground at the time.

An inquest heard the tragedy occurred on April 29 last year at the Black Knights Parachute Centre in Cockerham, near Lancaster, which was holding a training day for tandem sky-diving.

Mr Marsh, an expert instructor who had performed 1,150 jumps all over the world, had gone up in a Cessna Caravan aircraft with Mr Leeds to teach him a two-way manoeuvre called a ‘canopy formation’.

In it, jumpers fly their parachutes in proximity to each other and then ‘dock’ onto the other jumper’s parachute in a move known as a ‘stack’. 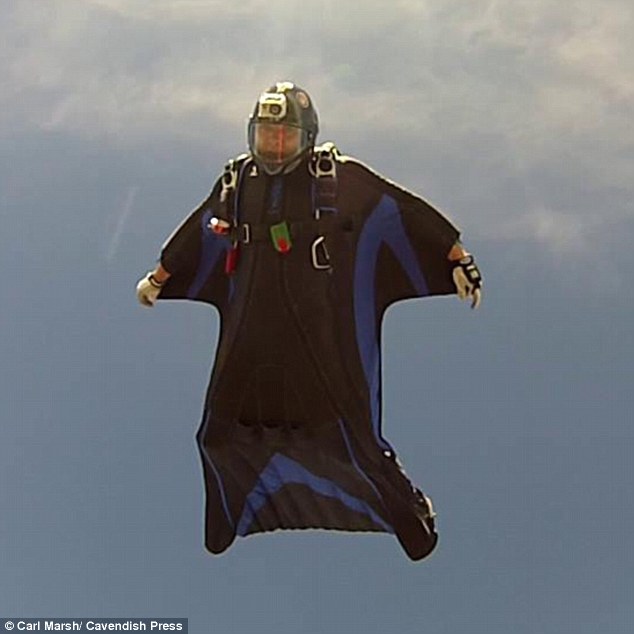 When father-of-one Mr Marsh (pictured)  helped Mr Leeds to release his reserve second parachute, he became entangled in the principal chute as it was being jettisoned away

The pair jumped out at 8,000ft but as Mr Leeds attempted to release his parachute, a toggle broke so Mr Marsh went to help him.

Mr Leeds, who had previously carried out 400 jumps himself, told the Preston hearing: ‘I reached up to deploy the left hand steering toggle but as I pulled the toggle down the left toggle came off.

‘I didn’t immediately execute my emergency procedures because I was worried that Carl was very close or behind me.

‘I said to him: “Mate, my brake line has broken” and I remember him replying to me: “Okay buddy, don’t worry.” We were coming through the clouds at this point and he said: “Don’t worry I’ll come and dock on your canopy and we will go down together.”

‘I should have told him we will go down side to side – at this point we had plenty of time to fly down safely before having to deploy my reserve parachute. 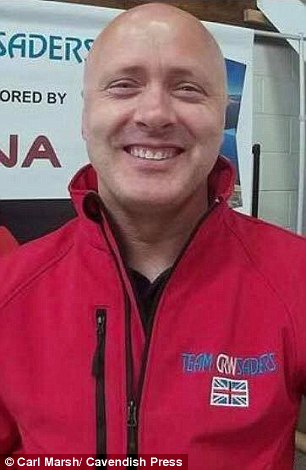 ‘We had good communications at this point. I saw two parachutes down below me so I said: “Can we wait a second whilst they separate” and Carl turned us in a different direction.

‘At this point Carl was telling me I needed to break off. I remember having a huge surge of adrenaline as the reality and fear of what was happening set in.

‘Carl said: “Come on buddy you need to cut away,” and he said this as an instruction. I pulled out the red lever and released my canopy and fell away from him. I went into freefall and then deployed my reserve parachute.

‘As I cut free, my primary parachute became wrapped around Carl’s legs. I had so much adrenaline at this point I couldn’t tell whether he said anything else to me but I don’t remember him saying anything. I looked back to see that Carl was spiralling with my canopy on the bottom of his legs.’

Mr Marsh’s 19 year-old son Craig, who works at the centre and was present that day told the inquest: ‘He was the best dad I could have had – he did everything for me. He was always looking out for others and always put other people first before himself.’

Tony Butler, Chief Operating Officer at The British Parachute Organisation, told the hearing: ‘I wouldn’t have expected someone to dock onto someone else’s parachute when there was something wrong with that person’s parachute, as you don’t know how it is going to react. I believe Carl was probably trying to be helpful as Carl knew the area whereas Dominic didn’t.

‘I certainly don’t think Dominic did anything wrong at all. As a student you are inclined to do exactly what your coach is telling you to do. You should always separate yourself before cutting away a parachute.

‘Having the canopy tangled would not cause the parachute to spin. The only cause we could see was that one of the steering toggles was depressed. At this stage he was wrapped in someone else’s chute and he was approaching the ground. He would be carrying a knife for this purpose and he managed to cut himself free from that parachute.

‘It is likely that as he was trying to release the lower parachute he was not concentrating on the steering. It is also possible that as soon as he began to spiral, because of the speed the parachute would have been turning this could have rendered him unconscious and unable to steer the parachute.’

Recording a conclusion of misadventure, Coroner James Newman said: ‘This is a hazardous sport and Carl deliberately put himself in harm’s way to help his student.

‘As part of a canopy formation two parachutes were meant to perform what is known as a ‘stack’ but the other parachute suffered equipment failure.

‘Carl Marsh attempted to assist, putting himself at risk and subsequently became entangled in a primary parachute that had been released leading to the involvement of a catastrophic spin.

‘This resulted in unconsciousness and Carl was therefore unable to recover the spin and suffered catastrophic and fatal injuries passing away at the scene. It is a testament to his character that he stepped in to help, in doing so he put himself in danger.’

Mr Marsh was an experienced parachutist and held BPA qualifications.

He worked for TrustFord car dealership in Wilmslow at the time of his death. He had previously worked at garages in the Greater Manchester area including Evans Halshaw in Altrincham.

His family said in a statement: ‘Carl was taken away from us so suddenly that this just doesn’t feel real. Carl was a much loved husband, father, grandfather, son, brother, uncle and nephew to all of us and we all loved him very much.

‘Carl had a big personality and a positive outlook on life. He was full of jokes and laughter and always had a huge smile on his face. He loved nothing more than to have a laugh and joke with us all and never failed to bring a bright light into our lives. 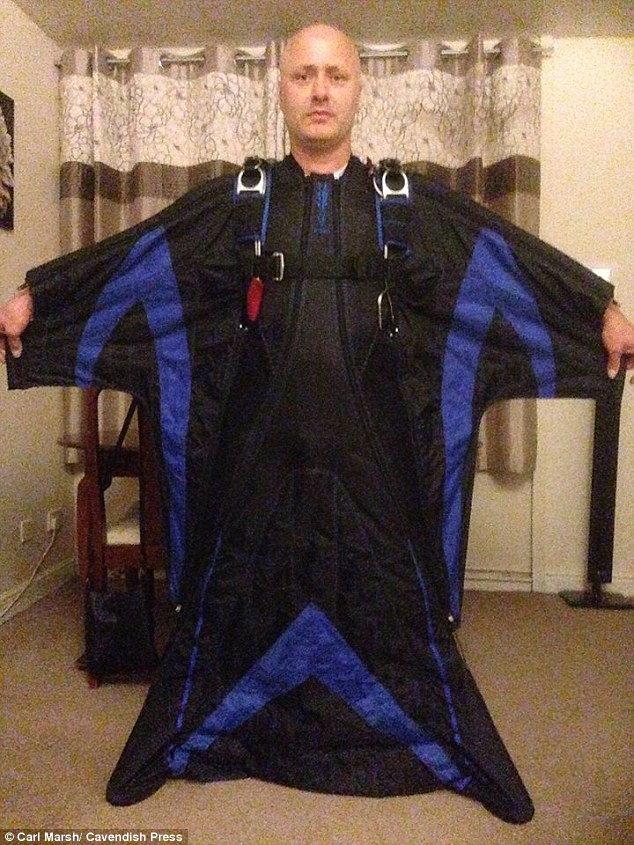 ‘His enormous heart was big enough for every one of us and he loved life to the full. He was a role model for many and had recently achieved the level of Category System Instructor with the BPA.

‘His passion for sky diving was something he got a great deal of pleasure out of. He was a leader and admired by so many and his son Craig says he was his hero.

‘It is hard to imagine how life will be without Carl. He has left a massive hole in our lives and we will never forget him. Carl was an inspiration to us all and his zest for life was demonstrated every day in his love for his family, his strong work ethic and his happy personality.’

In 2012, married father-of-three Lee Arthur Clifford, 40, from St Helens, Merseyside, was killed instantly at the same centre when he came down in a field close to where horrified spectators were watching.

Mr Clifford, also an experienced parachutist, had been taking part in a display as part of the annual Cockerham Gala in Lancashire, with members of the Black Knights Parachute Centre.

It is thought his main chute became tangled and by the time he had managed to cut it free he was too low to successfully deploy his emergency canopy.