Australia’s housing market is set to decline even further than initially reported, with fears it could plummet to the worst price decline seen in 40 years.

Initially predicting a four to six per cent fall in national housing prices, Macquarie Bank experts are now reporting price declines are to fall even lower, with Sydney and Melbourne expected to be hit the hardest.

As the overall crash is now approaching 10 per cent, this could be potentially ‘the largest peak-to-trough decline’ in housing prices in almost 40 years, Business Insider reports.

Experts are claiming Australia’s housing market is set to decline even further than initially reported, with fears it could plummet to the worst price decline seen in 40 years (stock image)

Talking of the revision of the forecast, members of Macquarie Bank’s Australian economics team Justin Fabo and Ric Deverell, believe the descent reflects largely on the expectation that prices would fall much further in Sydney and Melbourne.

The two capital cities are not only the largest and most expensive housing markets in Australia but have also experienced the fastest price declines this year.

‘Sydney and Melbourne average dwelling prices have fallen 9 per cent and 5 per cent, respectively, but are currently falling at annualised monthly rates of roughly 10 per cent,’ Mr Fabo and Deverell said.

‘This suggests that Sydney and Melbourne housing prices are now more likely to fall by 15 to 20 per cent from the peak. The fall in Sydney prices is already one of the largest on record.’

However, as Melbourne’s increase in new property, particularly in the city, adds to its already elevated levels of stock currently up for sale, Melbourne’s declining housing price decline could soon outpace Sydney’s.

Despite the grim forecast, Mr Fabo and Mr Deverell say that housing prices need to be put into persective. 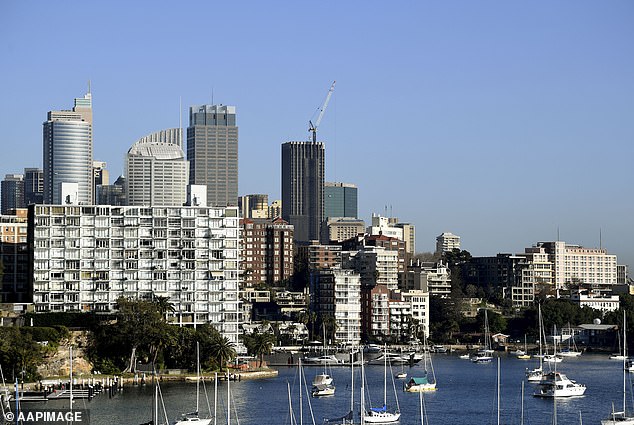 Initially predicting a four to six percent fall in national housing prices, experts are now reporting price declines are to fall even lower, with Sydney (pictured) and Melbourne expected to be hit the hardest

They believe that due to the rise of Sydney and Melbourne housing prices in recent years, even a 20 percent plummet would only take prices back to 2015 levels.

Despite this silver lining, fears seem to grow around the effect these large declines can have on the Australian economy, including the possibility that decreased prices could lead to lower household spending and weaker economic growth.

And while that could potentially be a risk, Mr Fabo and Mr Deverell believe such a scenario is only likely if labour market conditions start to weaken.