Experts have claimed that the New England Patriots will likely end up being forced to pay Antonio Brown a $9 million signing bonus, after the team released the disgraced wide receiver.

Brown was released on September 20, three days before the Patriots were due to pay him the first $5 million installment of the signing bonus.

The receiver, who is under NFL investigations for alleged sexual assault and sending threatening text messages, took to Twitter and mocked Patriots owner Robert Kraft over Kraft’s February arrest on misdemeanor charges of soliciting prostitution at a Florida massage parlor.

The Patriots promptly refused to pay out the signing bonus, and league sources said that Kraft would fight to the bitter end to avoid paying Brown another dime after the online insults. 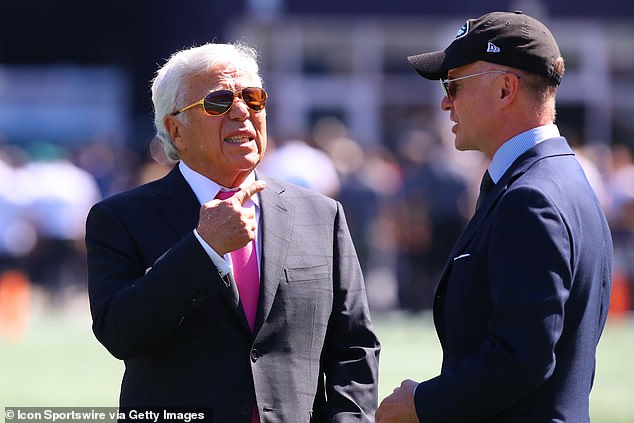 Patriots owner Robert Kraft (left) is fighting tooth and nail to avoid paying Brown a $9 million signing bonus, but experts believe the team may be forced to pay out the bonus

However, after all is said and done in arbitration, the Patriots may have no choice but to pay Brown the signing bonus, five experts told Yahoo Sports.

The key to the dispute lies in the league’s Collective Bargaining Agreement, which lists four specific reasons that a player would forfeit a signing bonus. Those reasons are:

League sources say that whatever the Patriots put into their contract with Brown, those four conditions are the only ones that the CBA allows for the forfeit of a signing bonus.

The lawsuit accusing Brown of rape was filed by 28-year-old Britney Taylor in federal court just three days after the Patriots signed him on September 7, hours after the Oakland Raiders cut Brown from a three-year, $30 million deal.

The Patriots may have been able to get out of their contract with Brown by arguing that he had withheld information about the civil suit during negotiations — but the team negated that claim when they allowed Brown to play against the Dolphins on September 15, league sources say. 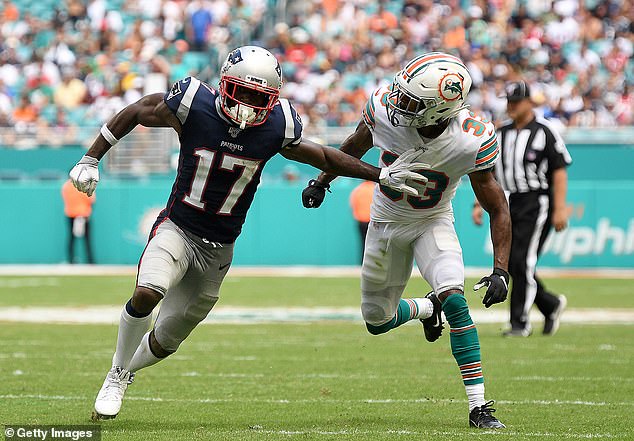 The Patriots paid Brown $158,333 for that game — which could ultimately undermine the team’s attempt to void the guaranteed signing bonus.

‘If they had cut [Brown] as soon as they became aware of the civil suit, then there’s the argument of the [withholding] breach undermining the entire agreement,’ one league source told Yahoo Sports.

‘But they kept him on the roster after that lawsuit was filed. They played him in a game. They even paid him checks for [two weeks of] work. If the civil suit was a true dealbreaker, the Patriots could have shown it by breaking the deal. Their actions speak to their intent and their intent was shown when they continued to pay him after the civil suit.’

Still, close observers expect Kraft to fight the bonus payment through every step of arbitration, and say that Brown should not expect to see the money any sooner than late in 2020.

‘This is just spitefulness. They’re fighting [Brown] completely out of the anger and embarrassment in ownership,’ one source told Yahoo. 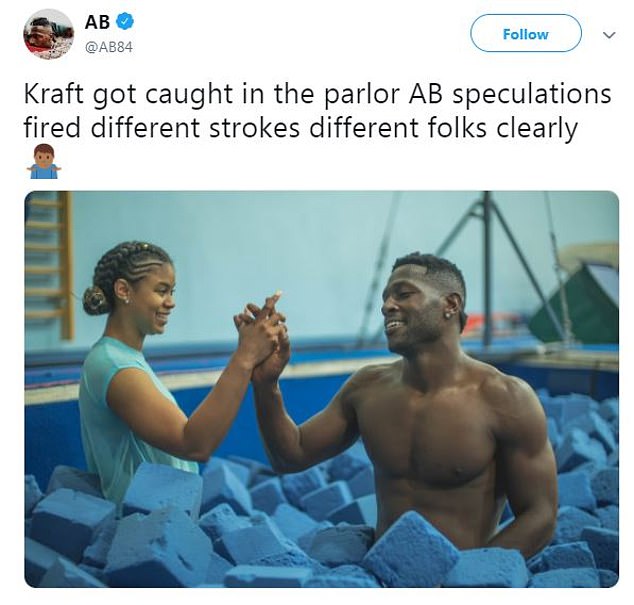 Some believe that no mater what ruling is delivered in arbitration, Kraft will refuse to pay Brown.

Following his release from the Patriots, Brown initially took to Twitter to announce his retirement from the NFL, but quickly reversed course and said he hoped to play again.

Brown is currently an unrestricted free agent, and is under investigation by the NFL, which has yet to reach a conclusion in its probe.

Drew Rosenhaus, Brown’s agent, believes his client will be back in the NFL if and when the league clears him of any wrongdoing.

‘I believe that Antonio wants to continue his career in the NFL,’ Rosenhaus said on retired NFL veteran Warren Sapp’s podcast.

‘It’s my hope, it’s Antonio’s hope, that he’ll be back playing as soon as possible,’ Rosenhaus added.

Timeline of Antonio Brown’s rise and fall in the NFL

2010: The Pittsburgh Steelers draft Brown in the sixth round of the 2010 NFL Draft.

2010 season to 2018 season: With the Steelers, Brown excels, blowing draft expectations out out the water.

In Pittsburgh, he amasses more receptions and receiving yards than any other player since he entered the league.

March 9, 2019: After Brown is benched for missing practice, he pressures the Steelers to trade him. The Steelers agree to trade Brown to the Oakland Raiders, who sign him for a three-year, $30 million deal.

August 3: Brown posts a picture of his heavily blistered feet on Instagram, which was later revealed to be frostbites to his feet due to not wearing proper footwear during a cryotherapy session. He misses several practices.

August 9: Brown files a grievance demanding to continue wearing his old helmet even though it had been banned. Between his helmet and his feet, Brown misses 10 out of 11 training camp practices.

September 4: Brown is fined a combined $54,000 by general manager Mike Mayock due to unexcused absences. He posts the fine letter on Instagram.

September 5: Brown has a verbal altercation with Mayock, who is white, and reportedly calls the GM a ‘cracker.’ Brown denies the report.

September 15: In his only game with the Patriots, Brown gets four receptions for 56 yards and one touchdown in a 43-0 win over the Dolphins.

September 16: A second, unnamed, woman accuses Brown of sexual harassment in an interview with Sports Illustrated.

September 20: Just hours after the press conference, the Patriots announce that Brown has been released from the team.