The oldest footprints made by pre-humans are more than six million years old, scientists have revealed.

Around 50 of the track marks were identified near the village of Trachilos on the western edge of the Greek island of Crete back in 2002.

They were found in a type of sedimentary rock that formed when the Mediterranean Sea briefly dried out.

Now, dating techniques have now shown them to be 6.05 million years old, making them the oldest direct evidence of a human-like foot used for walking.

While it remains unclear which species left them, the prints have a distinctly human-like form, with a similar big toe to our own and a ‘ball’ in the sole that’s not found in apes.

One of the around 50 Trachilos footprints. The prints were found in a type of sedimentary rock that formed when the Mediterranean Sea briefly dried out 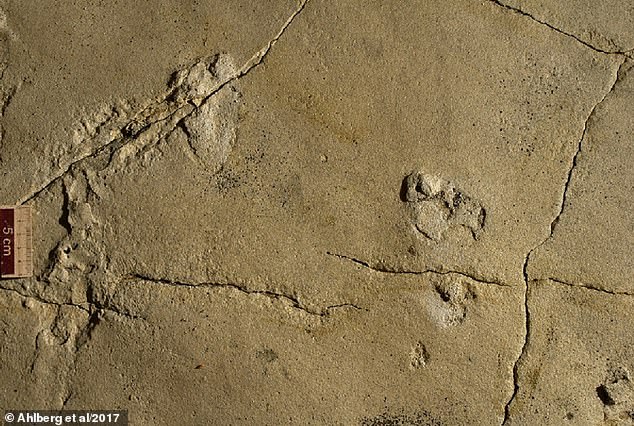 Photograph of two prints, published in the 2017 paper, ‘possibly representing a static stance of one individual’

The Trachilos footprints were found in a type of sedimentary rock that formed when the Mediterranean Sea briefly dried out.

The Trachilos prints were created on the sandy shore of the Mediterranean, on the Greek island of Crete.

Researchers have dated them to 6.05 million years ago, making them the oldest direct evidence of a human-like foot used for walking.

During this time, before modern day Crete detached from the Greek mainland or the Sahara Desert even existed, early hominins could have lived across southeast Europe as well as Africa.

The shape of the fossil prints suggests the suspected hominin who left them was more primitive than the Laetoli, whose 3.7 million-year-old prints found in Tanzania gave evidence of human-like feet and upright locomotion.

Six million years ago, Crete was still attached to the Greek mainland, meaning early hominins could have lived across southeast Europe as well as Africa.

The ‘Trachilos footprints’ are almost 2.5 million years older than the tracks attributed to an ancient pre-human species called Australopithecus afarensis, from Laetoli in Tanzania, Africa. A. afarensis is the species to which the famous early human ancestor ‘Lucy’ belongs.

The shape of the Trachilos prints indicates that they belong to an early hominin, somewhat more primitive than A. afarensis.

They were made on a sandy seashore, possibly a small river delta, whereas the Laetoli tracks were made in volcanic ash.

Footprints are like any other fossil, and can be aged using ‘foraminifera biostratigraphy’ – the analysis of single-celled organisms called foraminifera to determine ages of rock.

The Trachilos prints provide a stunning snapshot of a single moment in ancient history, but the species that made them is unknown.

‘The oldest human foot used for upright walking had a ball, with a strong parallel big toe, and successively shorter side toes,’ Per Ahlberg, professor at Uppsala University and co-author of the study, said.

‘The foot had a shorter sole than Australopithecus. An arch was not yet pronounced and the heel was narrower.’

In a 2017 study, the rock in which the footprints were found was dated to about 5.7 million years ago, which predates the previously earliest discovered hominin footprints by about two million years. 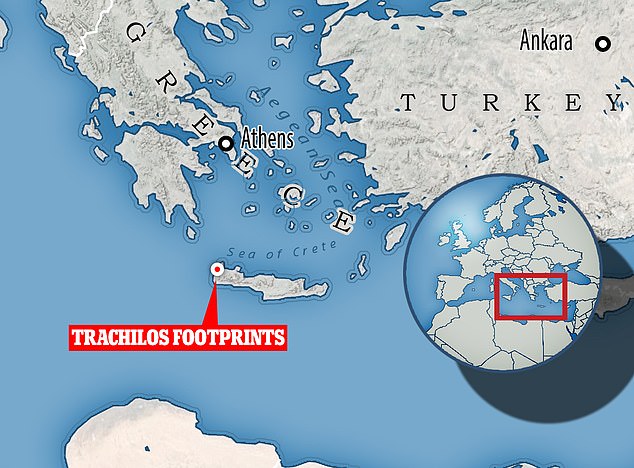 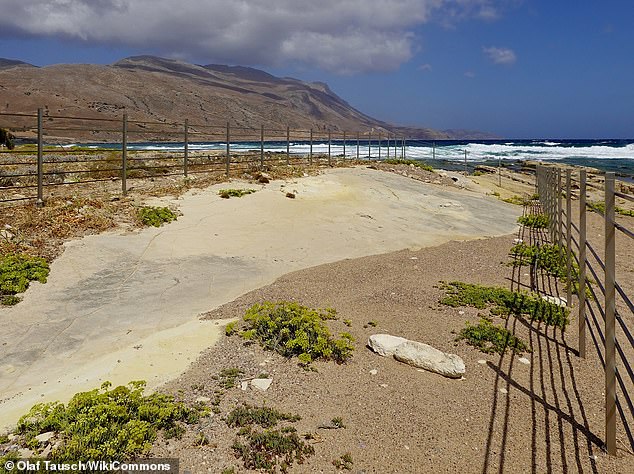 Pictured, a rock slab containing the footprints near Trachilos overlooking the Mediterranean Sea

But study author Dr Uwe Kirscher at the University of Tübingen today told MailOnline that his team are now providing a more ‘robust and precise age’ for the footprints.

The age in the 2017 was ‘merely an estimate’, he said, based on the wrong assumption that the overlying sediments are related to the Messinian Salinity Crisis – the drying up of the Mediterranean around 5 to 6 million years ago.

‘Sediments related to the crisis are absent in this part of Crete,’ Dr Kirscher said.

Several of the authors on the 2017 paper authored this new study. One of them, Professor Ahlberg, also told MailOnline that the previous ageing ‘turns out to have been incomplete and slightly faulty’. 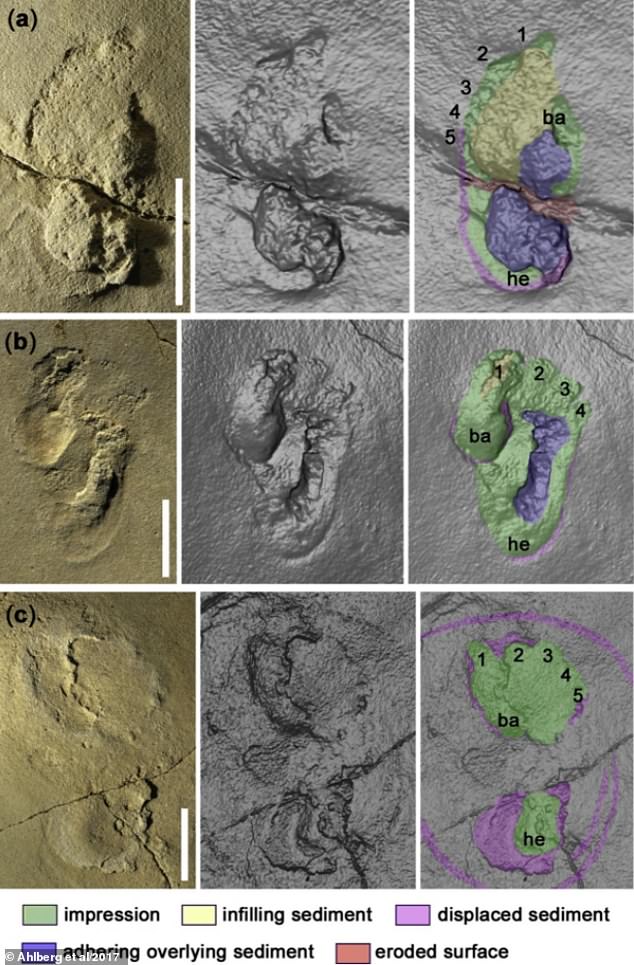 Photos and digital scans of three of the ‘well-preserved footprints’. Each is shown as a photo (left), laser surface scan (middle) and scan with interpretation (right). a) was made by a left foot, b) and c) by right feet. Scale bars, 1.9 inch (5cm)

For the analysis, the researchers used geophysical and micropaleontological methods to age the Trachilos footprints, which were made on a sandy seashore.

The new estimate puts them at the same age as the fossils of the upright-walking primate Orrorin tugenensis, which originated in Kenya and lived 6.1 to 5.8 million years ago. 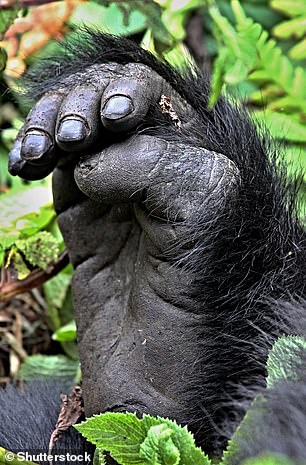 The feet of our closest relatives (the other great apes) look more like a human hand, with a thumb-like hallux that sticks out to the side. Pictured, a gorilla foot

While the Trachilos footprints are described as pre-human, they’re remarkably similar to our own considering their age, keeping in mind that the first Homo sapiens emerged a couple of hundred thousand years ago.

Human feet have a very distinctive shape, different from all other land animals.

The combination of a long sole, five short forward-pointing toes without claws, and a hallux (‘big toe’) that is larger than the other toes, is unique.

In comparison, the feet of our closest relatives (the other great apes) look more like a human hand, with a thumb-like hallux that sticks out to the side.

The Trachilos footprints have an unmistakably human-like form – and this is especially true of the toes.

The big toe is similar to our own in shape, size and position. It is also associated with a distinct ‘ball’ on the sole, which is never present in apes. 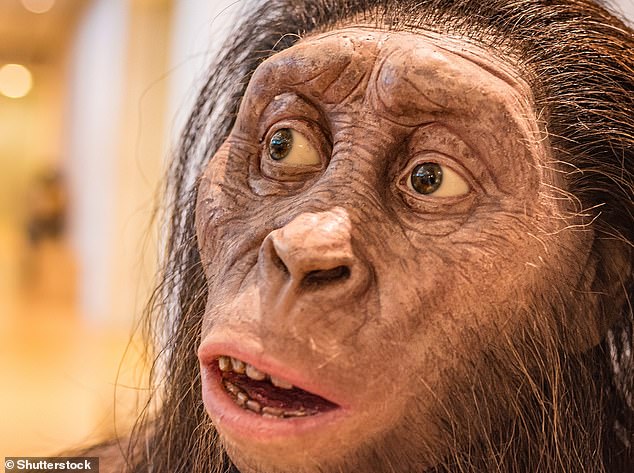 The ‘Trachilos footprints’ are almost 2.5 million years older than the tracks attributed to an ancient pre-human species called Australopithecus afarensis (artist’s impression pictured), from Laetoli in Tanzania, Africa. A. afarensis is the species to which the famous early human ancestor ‘Lucy’ belongs

The footprints in Tanzania left by A. afarensis are quite similar to those of modern humans, except that the heel is narrower and the sole lacks a proper arch.

By contrast, the 4.4 million year old Ardipithecus ramidus from Ethiopia, the oldest hominin known from reasonably complete fossils, has an ape-like foot.

The researchers who described Ardipithecus argued that it is a direct ancestor of later hominins, implying that a human-like foot had not yet evolved at that time.

The new study has been published in the journal Scientific Reports.

2.3 million years ago – Homo habalis first thought to have appeared in Africa