The American Academy of Pediatrics now says that children should remain in rear-facing car safety seats an extra two years — until they are about four years old.

Now, however, the American Academy of Pediatrics has updated its recommendation and encourages parents to keep children in rear-facing car seats until they reach the seat’s highest weight or height limit, which is estimated to be about when children reach age four.

Due to the decline of car deaths and injuries amongst children following increased car seat usage, Dr. Benjamin Hoffman, chair of the AAP Council on Injury, Violence and Poison Prevention, said in a news release, that ‘we just don’t have a large enough set of data to determine with certainty at what age it is safest to turn children to be forward-facing.’

As a result, Hoffman recommends that, ‘If you have a choice, keeping your child rear-facing as long as possible is the best way to keep them safe.’

Unlike with rear-facing seats, in forward-facing seats, a toddler’s head — which is ‘disproportionately large and heavy’ — is thrown forward in a crash, which could lead towards spine and head injuries.

It’s then recommended that children who are too big for their forward-facing car seats be moved to a belt-positioning booster seat until they are big enough to properly use the car’s built-in lap and shoulder seat belt. 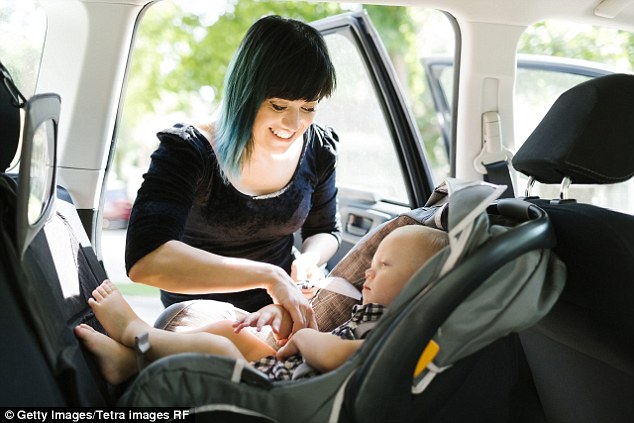 Unlike rear-facing seats (shown), in forward-facing seats, a toddler’s disproportionately large and heavy head is thrown forward in a crash, lead to potential spine and head injuries

Children can typically use standard lap and shoulder seat belts safely when they are at least 4 feet 9 inches tall, or around eight to 12 years old.

The AAP also recommends that children under 13 should ride in the backseat of cars for enhanced safety.

‘A lot of times they like to see their child, entertain their child, especially if their child might be a little more fussy,’ Young said, noting that it’s better to put up with a fussy child than put them at risk of injury in a crash.

Ultimately, using a car seat, whether front-facing or rear-facing, is key. Hoffman pointed out that car crashes are still the leading cause of death for children.

He said that over the past 10 years, an average of four children under the age of 14 died per day and said that using the correct car or booster seat lowers the risk of death or serious injury in children by more than 70 per cent.