Australia needs to lift its IT and digital game or risk being left behind by the rest of the world, according to new research.

A report from international recruitment agency Hays surveyed 3,500 companies and found a critical shortage of technology workers was brewing.

More than two thirds of respondents (68 per cent) believed the local technology industry was suffering from a skills shortage, the Hays Salary Guide Report said.

Almost as many respondents (64 per cent) were concerned the effectiveness of their organisation or department would be affected by the shortage in the next year.

Many businesses also shifted to remote working with more reliance on technology since the Covid pandemic, placing further pressure on companies to find or train up staff with digital know-how.

Demand for workers with IT and digital skills is soaring with one report estimating 6.5 million new or retrain technology savvy workers would be needed in Australia by 2025 (stock image)

Research by Amazon Web Services found 81 per cent of Australian workers said they needed more training to keep up with technology changes in their job.

The study found 3.7 million workers needed more digital skills but only 30 per cent of organisations had those training programs in place.

The Building Digital Skills for the Changing Workforce report found cloud-based tools, cloud-based communication, accounting, customer relationship management software and cybersecurity skills were forecast to be the most in-demand skills sought by Australian employers by 2025.

About 62 per cent of workers don’t have these skills, the study found.

This was an almost 80 per cent increase on the current numbers.

‘While the need for digital skills has been growing for years, this research shows that job changes due to Covid-19 have accelerated the need for more training for both tech and non-tech workers on digital capabilities in Australia,’ AlphaBeta’s Asia Pacific director Genevieve Lim said.

‘Transitioning into a digital-first economy will help countries’ recovery from Covid and secure a stronger economic future.

‘There is an urgent need for governments to work together with employers, training providers, and workers to meet these diverse and growing digital learning needs.’

The warning is forcing companies to look for ways to quickly train up staff in these areas with companies emerging to take on this role.

One such program is TechBee, run by global IT company HCL, aims to train thousands of Australian school leavers and secondary students in cloud computing, artificial intelligence, cyber security, and coding. 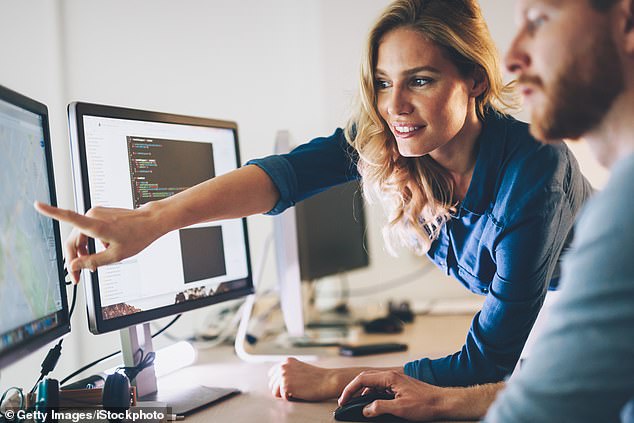 Another solution would be a shift in visa requirements for skilled temporary workers.

A report from The Grattan Institute found targeting higher wage workers would safeguard against skills shortages in many profession including digital.

‘Employers are sponsoring a growing number of low-wage workers with few skills,’ it said.

The report argued it was ‘practically impossible to quickly and reliably identify skills shortages in individual occupations’.

‘Instead, temporary sponsorship should be reserved for higher-wage jobs in any occupation. Targeting higher-wage migrants will better address most genuine skills shortages that emerge,’ it said.

The report also argued visa workers above a $70,000 salary threshold should be allowed to switch jobs without the threat of losing their visa, to reduce exploitation of workers by companies that sponsor them.

Labour market testing requirements that mandate jobs be advertised in Australia before being offered to overseas applicants should also be removed, it said.