Royal experts today hit out at Harry and Meghan’s new Netflix series for its alleged lack of ‘substance’, claiming it is ‘all sizzle, no steak.’

A slew of commentators took to TV studios to give their views on the first three episodes of the show, which were released this morning.

Former BBC royal correspondent Michael Cole said the first three episodes have been ‘all sizzle and no steak’ and asked: ‘Where is the beef?’

He added that the couple have been ‘whinging and whining’ whilst living in a ‘hilltop fortress in California’.

Highlighting the personal footage and photos that feature in the show, ITV’s royal editor Chris Ship said the couple ‘basically video diaried their way out of the royal family’, despite having complained about media intrusion in their lives.

Royal experts today hit out at Harry and Meghan’s new Netflix series for its alleged lack of ‘substance’, claiming it is ‘all sizzle, no steak’

Speaking to GB News, Mr Cole said: ‘This is all sizzle and no steak; an expression I’m sure Netflix will understand. Where is the beef?

‘Because it is not living up to its billings and if we are just going to be treated to six episodes of them blandly saying “we are wonderful and the others are horrible, we are right and they are wrong”, I think that is going to pall quite quickly.

‘We have now just seen the first three episodes. But it is not a good look you know, whinging and whining.’

He went on to draw a contrast between the couple’s glamorous lives with the war in Ukraine and the struggles ordinary Britons are facing with rising energy and food prices.

‘When you think about these two people in their hilltop fortress in California, lovely looking people both of them, beautiful children, healthy,’ he said.

‘They have got all the money in the world, cars, people who want to see them, smile at them, say yes to them, what an earth have they got to worry about. 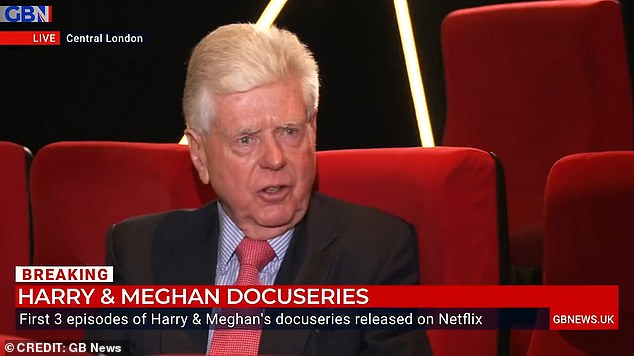 Former BBC royal correspondent Michael Cole said the first three episodes have been ‘all sizzle and no steak’ and asked: ‘Where is the beef?’ 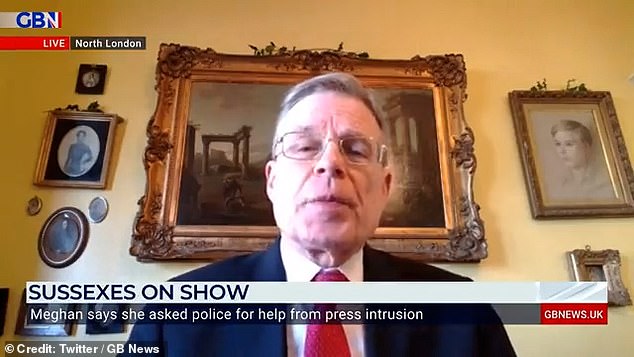 Royal commentator Richard Fitzwilliams said on GB News that he expects direct criticism of other members of the royal family to come in the next three episodes, which will be released next week

‘Two time zones from where we are sitting in London, there is a terrible war going on. People are being murdered, raped, and don’t know where they are going to go for their food and their heat.

‘In this country there are people afraid to turn on their central heating because they don’t think they can pay the bill.

‘I’ve just come here on the train. All those people are putting up with strikes and the eco-anarchists on the road, preventing them earning a living to pay their taxes to pay for all this [the Royal Family].’

‘And I said to a minor royal who was complaining about some unfair coverage, and I said to him, “the time for you to worry matey is when the media is no longer interested.”

‘Because that will mean the media is no longer interested in the monarchy.

And when that happens, the game is up. Let’s be honest about this.’

His comments came as ITV’s royal editor highlighted on Good Morning Britain the slew of previously private videos and images that appear in the first three episodes of the show.

‘You got little teasers of like how Meghan and Harry basically video diaried their way out of the Royal Family,’ Mr Ship said.

‘That might come as a surprise to some people given that they were complaining against intrusion.

‘It might create the impression that they were planning always to make some Netflix documentary like this.

‘For me the issue is between the criticism of their privacy being invaded by the press and yet then we have got cameras inside their car filming them being chased by the paparazzi in the US.

Dickie Arbiter, 82, who was the Queen’s press spokesman from 1988 until 2000, also questioned the couple’s stated wish for privacy.

‘They left [the royal family] because they wanted privacy,’ he told GB News.

‘Well so much for privacy in this documentary because we are seeing a lot of family photographs, we are seeing, albeit the backs of the children, little bit of side profile but we are still seeing them.

‘So it is really suiting their agenda.’

And Royal commentator Richard Fitzwilliams said on GB News that he expects direct criticism of other members of the royal family to come in the next three episodes, which will be released next week.

‘This is about as I see it two things, one is money,’ he said.

‘The Sussexs have a contract with Netflix that is worth it has been estimated a reported $100million or so… and they had therefore to make something that was supposed to appeal most emphatically to an American audience.

‘Essentially, although there are jibes that could be linked to them, they don’t criticise individual members of the royal family as yet.

‘But there is no question that this is probably coming I suspect, in the fourth, fifth sixth episodes.

‘Watching it I have to say I am going to reserve judgement as to how damaging it is going to be until I’ve seen the whole thing.

‘When it comes to privacy and you share intimate texts, intimate videos, they couldn’t be more intimate.

‘Privacy is gone when you’ve got money. And also there is the revenge factor.

‘That is left to the second part next Thursday where explosive revelations are promised I think.’

Royal biographer Angela Levin said on TalkTV that the couple have ‘rewritten history’.

I actually found it riveting. Three hours I sat there,’ she said.

‘And the reason is, I have often said they are only interested in talking globally.

‘And this was like an A to Z of global complaints that if it was to do with them they could manage it all.

‘I thought there was a real demand that they took over.

‘They have re-written history, remembered every single little grievance over the five years that they’ve known each other.

‘Tiny things, like her zip went on one occasion. For goodness sake, who are you to keep all of that in your head.

V’ery ungracious. There was no thank you very much for what Meghan’s got. S

‘he is rich and famous now. She wouldn’t have been if she hadn’t married into the monarchy. And they broke their privacy good and proper.’

Paul Burrell, Princess Diana’s former butler, said Harry and Meghan have chosen to ‘cash in’ with the new show, when they could have been ‘at the heart of the royal family’.

Burrell, 64, served as a footman for Her Majesty and was later butler to Diana for 10 years until her death in 1997.

Speaking on ITV’s Lorraine this morning in response to the release of the first three episodes of the Duke and Duchess of Sussex’s show, he said the Queen, who died aged 96 in September, would be ‘very upset and unhappy that Harry was saying so much, showing so many private things.’

He added that the show likely to create fresh ‘conflict’ between the duke and his elder brother Prince William and has been ‘carefully directed’ by Harry and Meghan to ‘make them look like victims.’